An academy in Staffordshire is believed to be the first school to have closed due to a confirmed coronavirus case since they reopened to pupils.

The JCB Academy in Rochester, Staffordshire, was one of the first schools to welcome pupils back at the end of August but told children to stay at home today.

In an email sent to parents late last night, the school said it was investigating a 'single case' of the virus but did not clarify whether a member of staff or a student tested positive.

The school has been closed 'as a precaution', with 700 of the 800 students being allowed to return to class next Monday. 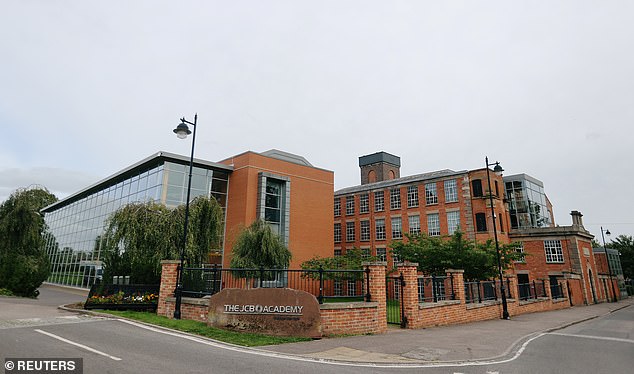 The JCB Academy in Rochester, Staffordshire, was one of the first schools to welcome pupils back at the end of August but told children to stay at home today

Around 100 students have been asked to stay at home and self-isolate for the next 14 days.

The school has told parents not to be 'unduly concerned' by the outbreak but advised them to book a test for their child if they become symptomatic.

She told the BBC: 'Through track and trace, academy staff have worked throughout the day to contact the families of students believed to have been in contact with the individual who has tested positive. 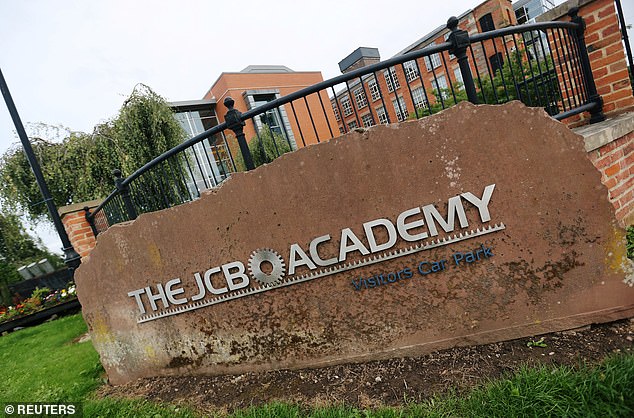 The school has been closed 'as a precaution', with 700 of the 800 students being allowed to return to class next Monday

'As a result, around 100 students have now been asked to self-isolate for the next 14 days.

'In the meantime, the JCB Academy will re-open on Monday for the remaining 700 students.'

Self-isolating students will be able to access learning on Google Classroom for their lessons.

At least seven schools in England have sent students home due to outbreaks of the virus but the JCB Academy is believed to be the first school to fully close since reopening. 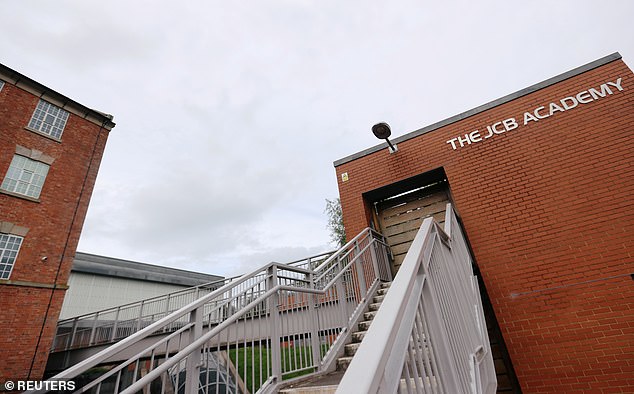 More than two dozen pupils at Unity College in Burnley were sent home to self-isolate after a child tested positive for coronavirus yesterday afternoon.

The school confirmed a Year 7 pupil contracted the virus on his first day of school.

It was the first day many children were returning to the classroom after a six-month absence.

In a statement on the school's website, Headteacher Mrs Sally-Jane Cryer said: 'At the start of the afternoon of Wednesday 2 September 2020, I was contacted by a parent of a child in year 7 to inform me that the year 7 child has tested positive for Covid-19. 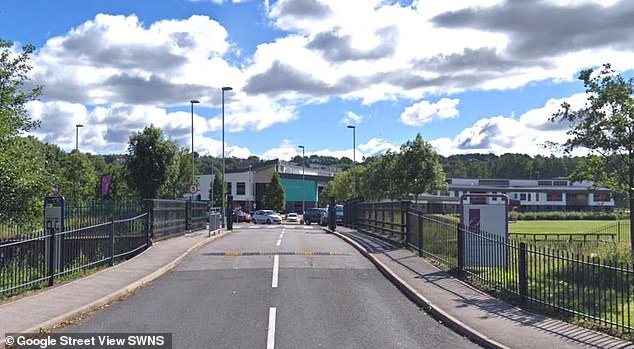 'The boy and his family have been part of the governments track and trace pilot and are tested weekly. The parents do not have the virus but the year 7 child does have it.

'The boy has had no symptoms at all. The college took immediate action and isolated the boy and his family collected him immediately.

'The parents of all the other students in the child's bubble, 25 year 7 students in total, have been contacted and all 25 have been sent home this afternoon and told to self-isolate for 14 days.

'The rooms where the class have been taught were deep cleaned immediately. No other student bubbles in any year group including year 7 have been affected.'

The majority of headteachers are reporting an attendance of more than 80%  among the pupils in England returning to the classroom this week, suggesting around one in five parents are yet to send their children back to school.

Schools in England have begun welcoming back students in all year groups for the start of the autumn term, with the remainder due to open next week.

Early indications from a poll, by the school leaders union NAHT, suggest around nine in ten (92%) schools have had more than 80% of pupils attend.

The survey, of more 840 school leaders on Friday, found more than four in five (82%) schools have had more than 90% of children turn up to school. 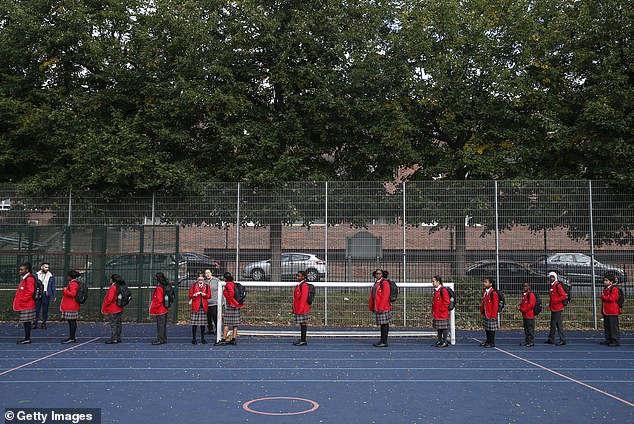 Year 7 students line up in the playground and observe social distancing at City of London Academy Highgate Hill today after schools reopened, as a poll shows there are still pupils not returning because of coronavirus

School leaders said the top reasons for pupils not attending school were that they were quarantining following a trip abroad, were still away on holiday or were unwell with a non-coronavirus illness.

The overall absence rate during the 2019/20 Autumn term was 4.93 per cent, with the unauthorised absence rate at 1.32 per cent. For the three years prior, it was lower still.

About one in five (21%) school leaders said they had a pupil in their school who did not attend because their parents felt too anxious to send them back.