Man, 29, whose bike was stolen while he was at the gym finds mysterious PHOTO of 'thief pinching it' moments earlier with no other explanation A 29-year-old man had his bike stolen from Prebend Gardens road in Chiswick Instead he found an A4 picture of the 'thief' duct-taped where he left his bike It was timestamped 2.45 on September 1 - just 15 minutes before he returned

A 29-year-old man came out of a gym to find his bike had been stolen and someone had left a photo of the 'thief' in its place.

The owner left his bike locked up on Prebend Gardens road near Stamford Brook station in Chiswick on the afternoon of September 1.

But he came back just after 3pm, around an hour and a half after heading into the gym, to find that his bike had disappeared. 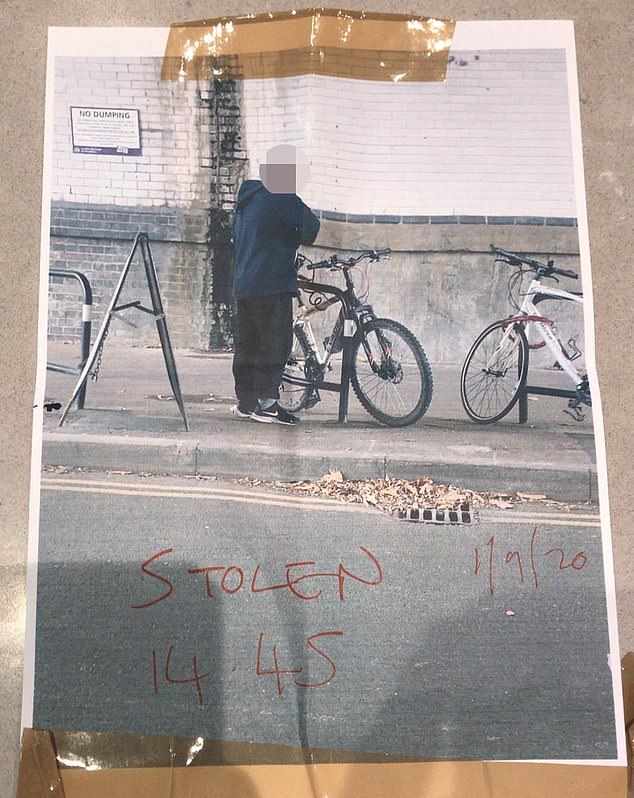 A 29-year-old man came out of a gym to find his bike had been stolen and instead a photo of the 'thief' had been left in its place, with no other information apart from a timestamp (above)

Surprisingly, the 29-year-old saw two pieces of A4 paper where his bike had been locked up, seemingly showing a 'thief' with his bicycle.

The man said: 'I locked the bike up,