Donald Trump calls John Bolton 'such a jerk' for criticizing the president's 'love letters' with Kim Jong Un - days after Bolton said Trump was 'despicable' for Atlantic article that said he referred to American war dead as 'suckers' and 'losers' President Donald Trump went after his former National Security Advisor John Bolton in a Monday tweet  Trump said that 'Wacko John Bolton' had been criticizing the president for calling his correspondence with North Korean leader Kim Jong Un 'love letters' 'Obviously, was just being sarcastic. Bolton was such a jerk!' Trump tweeted, despite publicly bragging about said 'love letters'  On Friday, Bolton called Trump 'despicable' for the president's reported disparagement of American war dead, according to The Atlantic  'I have not heard anybody say, "Oh, that doesn't sound like the Donald Trump I know," Bolton told Bloomberg Radio on Friday, lending weight to the reporting

'Just heard that Wacko John Bolton was talking of the fact that I discussed "love letters from Kim Jong Un" as though I viewed them as just that. Obviously, was just being sarcastic. Bolton was such a jerk!' Trump tweeted around lunchtime Monday.

It was unclear where Bolton made the comments that got the president steamed, though during a Bloomberg Radio appearance Friday the ex-staffer who has since penned an anti-Trump book, lent weight to The Atlantic's reporting. 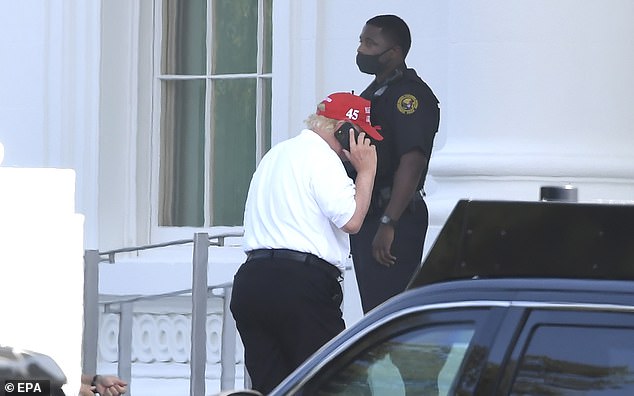 President Donald Trump photographed Sunday returning from golfing in Virginia. On Monday he went after former National Security Advisor John Bolton days after Bolton criticized Trump for what was reported in the Atlantic, that he had called American war dead 'losers'

PREV Kanye West states 'slavery is a choice' as he shares video of wall he is ...
NEXT Four Navy aircrew parachute to safety moments before E-2C Hawkeye plane crashes ...