Neighbours who spent three months building a rockery outside their flats are forced to remove it by council over health and safety fears Neighbours at block of flats in Bournemouth created rockery during lockdown   Display included low-level walls, plant pots, a flower border and a shingle bank  The council ordered to demolish it due to worries over loose stones and rocks John Supron, who helped build rockery, said it was 'health and safety gone mad'

Neighbours who spent three months building a rockery outside their flats have been forced to remove it by the council over health and safety fears.

Town Hall bureaucrats feared tenants could trip over some of the rocks and slabs that formed part of the display built into a grassy bank.

Occupants in the council-run block of flats in Westbourne, Bournemouth, Dorset, created the rockery during lockdown.

Those who took part in the project included a former builder and retired landscape gardener. 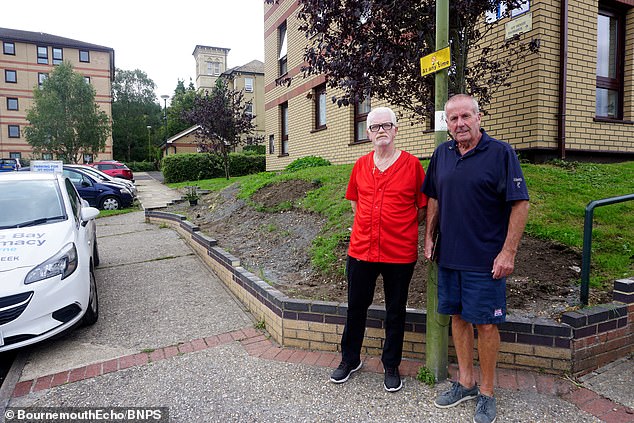 They wanted to smarten up the grounds at the front of the sheltered accommodation which had been covered by overgrown bushes and brambles.

The display included low-level walls made from stone, plant pots filled with conifer bushes and palms, a flower border and a shingle bank.

But after finishing the project they received a visit from an official from Bournemouth Christchurch and Poole (BCP) Council and were told they should have sought permission before undertaking the work.

The group were then ordered to demolish it due to worries over loose stones and slabs.

John Supron, who helped build the rockery, accused the council of 'health and safety gone mad'.

The 71-year-old retired construction worker said all the materials used had been donated by a nearby builders yard.

Mr Supron said: 'That part of the grounds was in a right state before we out the rockery in.

'We had overgrown bushes which were full of nettles. There were overgrown weeds and they were all taken down and we put rockeries there with plants, we made it