A father was left stunned after seeing hundreds of people standing in a 'five hour' queue waiting for Covid tests at a walk-in centre in Manchester.

Tony Kirvin, 43, needed to get his son Michael tested after the 14-year-old started showing mild symptoms and was sent home from school.

The nearest testing centre was a 120-mile round trip, which he said was not feasible, so Mr Kirvin instead drove to a walk-in centre near their home in Bury on Thursday.

But he was shocked to see hundreds of people queuing up outside the Mosses Centre, with many not wearing masks, video footage shows. 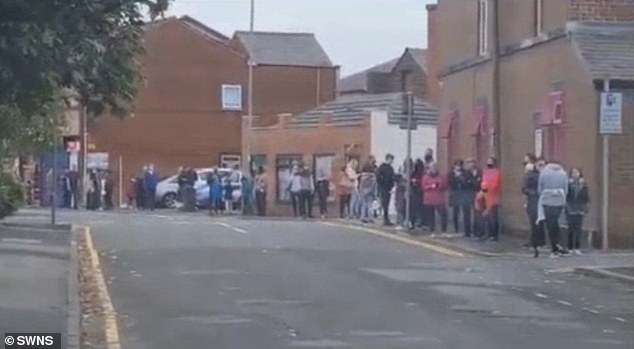 Tony Kirvin, 43, was shocked to see hundreds waiting in a 'five hour' queue for Covid tests at Mosses Centre in Bury, Manchester, on Thursday

While filming the queue, Mr Kirvin says: 'This guys is the queue for the walk-in Covid centre in Bury. Look at the f***ing size of this queue.

'Jesus f***ing christ it just goes on and on and on. No wonder we are in the middle of a pandemic.'

Mr Kirvin said his wife was told there was 'no chance' they would get into the centre as the wait was at least five hours.

He added that there was 'absolutely no way' they could join the line as his son, who has autism, would have 'had a meltdown' standing in a queue for that long.

The father-of-four said: 'We couldn't find a test anywhere until I saw this walk-in place.

'But when we arrived the queue was huge - there must have been at least 100 people.

'My son is autistic, no way he could stand in a queue that long. He'd have a melt down.

'It's just shocking to see, but not surprising considering schools have been reopened and we've had the eat out to help out scheme.

The full-time carer managed to get a test for his son at the Heywood site and is set to receive the results in the next two days. 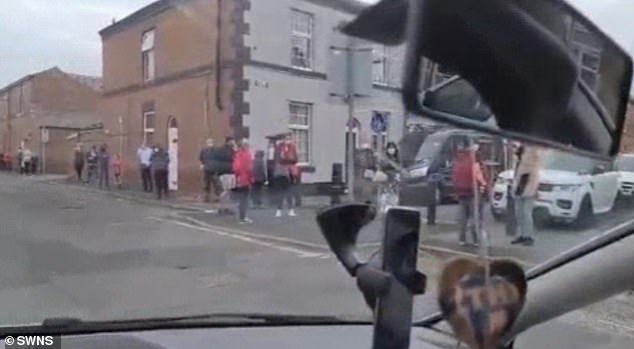 Councillor Andrea Simpson, Bury Council Cabinet Member for Health and Wellbeing, said: 'Bury has opened a number of walk-through testing centres to improve access and options for local people that are experiencing symptoms of coronavirus, additional sites are due to open very soon.

'Demand for testing is increasing at a national level and in