The evidence appeared to contradict Mr Andrews' claim in August that: 'It is fundamentally incorrect to assert that there were hundreds of ADF staff on offer and somehow, someone said no.'

But on Wednesday, Mr Andrews stood by that statement and said he would explain why when he appears at the inquiry into the quarantine program next week.

'I stand by those statements and I'll be providing evidence,' he told reporters. 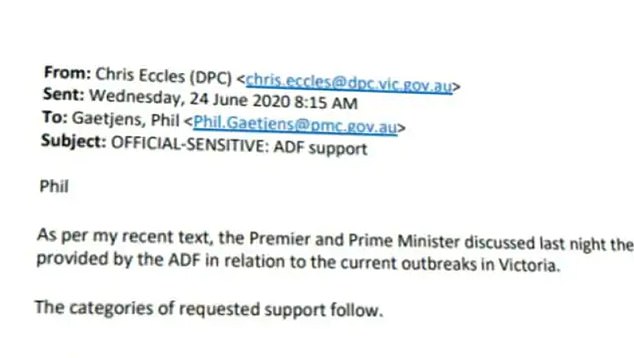 An email (pictured) from the prime minister's office to the premier's office on June 24 shows the pair discussed the ADF support that was on offer. But Victoria declined to accept it 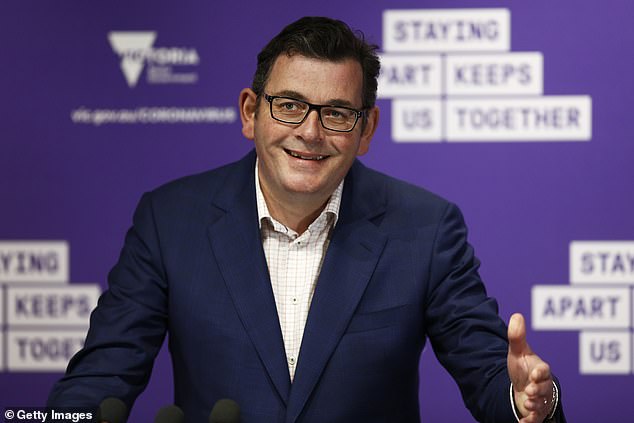 The premier refused to go into detail, telling a journalist: 'All can I can say is the statements I've made are accurate... it's not appropriate for me to run debates back and forth.

'You're fine to ask the question but there's a live process going on. I'm not distant from it. I'll be part of that process next week.'

Premier Pinocchio is a massive fibber with a very long nose

'Despite irrefutable proof, the premier is still denying the offer was made. Premier Pinocchio is a massive fibber with a very long nose'.

A spokesman for Mr Andrews told Daily Mail Australia: 'We will not run a commentary on the ongoing work of the judicial inquiry.

'The Premier stands by his previous comments.'

Daniel Andrews stands by his comments: What the premier said

JOURNALIST: Last month you it told the public accounts and estimates committee that it's fundamentally incorrect to assert there was hundreds of ADF staff on offer to Victoria and somehow someone said no. Do you stand by that statement?

PREMIER: Yes, I do. My statements have been accurate and I will be assisting the inquiry next week.

JOURNALIST: That appears to contradict the evidence we heard yesterday. We heard that the secretary of the Department of Prime Minister and Cabinet, Philip Gaetjens, wrote to your departmental secretary, Chris Eccles in an email titled 'assistance re hotel security' and he said he was sure the Commonwealth would be willing to assist with ADF personnel if Victoria wanted to 'reconsider its operating model'. He replied saying, 'Thanks, Phil'. In light of that, who is right about this? Why does your statement appear to contradict that?

PREMIER: All can I can say is the statements I've made are accurate. I stand by those statements and I'll be providing evidence.

It's not appropriate for me to run debates back and forth. You're fine to ask the question but there's a live process going on. I'm not distant from it. I'll be part of that process next week.

When the coronavirus quarantine policy was announced on 27 March, New South Wales accepted 360 troops and Queensland took 100 but Victoria refused any help, an inquiry heard on Tuesday.

Referencing how the ADF helped with security in NSW, Mr Gaetjens wrote: 'I am sure the Commonwealth would be willing to assist Victoria in a similar way if you wanted to reconsider your operating model'.

Mr Eccles replied: 'Thanks Phil' - but no request for help was made.

Instead, Victoria used private security guards who flouted social distancing rules, caught the virus in late May and helped spark the state's second wave which has killed more than 700 people.

It wasn't until June 24 that Victoria's emergency management commissioner Andrew Crisp made a request for 850 defence personnel to replace private security.

An email from the prime minister's office to the premier's office on that day shows the pair discussed the support.

But the request was rescinded a day later after the Department of Justice and Community Safety took over the program. 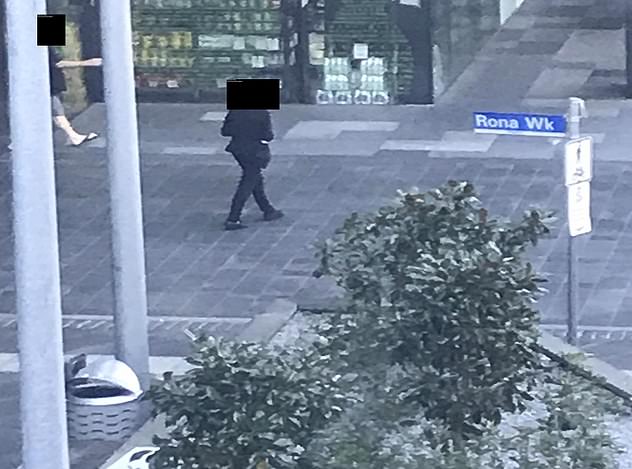 A federal government submission to Victoria's hotel quarantine inquiry on Tuesday also shows that Mr Morrison wrote to the premier three times - on July 4, 6 and 11 - 'reaffirming the Commonwealth's willingness to provide ADF support if needed'.

The evidence contradicts Mr Andrews's claim in August that help was not offered.

'(It's) fundamentally incorrect to assert that there were hundreds of ADF staff on offer and somehow, someone said no,' Mr Andrews had told a parliamentary committee last month.

The premier declined to comment on inquiry's revelations on Tuesday.

He said he wasn't interested in 'having a debate with the prime minister'.

Should Victoria have used ADF troops to man quarantine?