Stealing the show: Stray dog interrupts street performance to comfort actor pretending to be hurt Numan Ertuğrul Uzunsoy was feigning injury during a theatrical scene in Turkey It wasn't long before inquisitive canine wandered on to the stage to comfort him It curls up beside the actor and licks his face - much to the delight of audience

This is the heart-warming moment a stray dog was caught on camera interrupting a street performance to comfort an actor pretending to be hurt.

Numan Ertuğrul Uzunsoy was lying on the floor and feigning injury during a theatrical scene in Turkey.

But it wasn't long before an inquisitive canine wandered on to the stage, curled up beside him and started licking his face - much to the delight of the audience.

In the clip, which was recorded earlier this month, Mr Uzunsoy can be seen in a striped shirt, black trousers and leather boots alongside the rest of his troupe.

Two of his fellow actors lower him down toward the ground as he fakes an injury and begins breathing heavily.

The stray dog, which appears to be a cross-breed, then appears at the top of the screen with his tail wagging before meandering across the impromptu stage toward Mr Uzunsoy.

It sits down beside the actor's head before nuzzling excitedly at his chin. 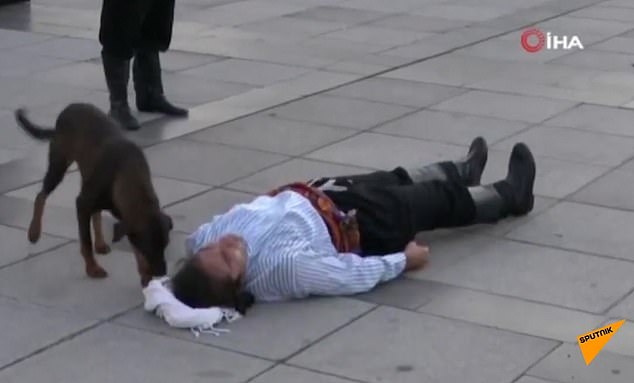 PREV Zombie tropical storm Paulette comes back from the dead and revives off the ...
NEXT Four Navy aircrew parachute to safety moments before E-2C Hawkeye plane crashes ...