Sorting through a much-loved parent's belongings after their death is bittersweet, to say the least. For all the wonderful memories that are ignited like flares in the darkness, there are the attendant stabs of loss.

As Wilfred Frost puts it, in the early days, 'anything you come across makes you cry'.

So imagine the Herculean task when the parent in question was not only a hoarder but legendary broadcaster Sir David Frost, who died of a heart attack in 2013 aged 74.

'Dad never liked to let things go,' says Wilfred, 35. 'He had storage depots in London, New Jersey and two in Los Angeles. And so after his death I started to sift through it all. 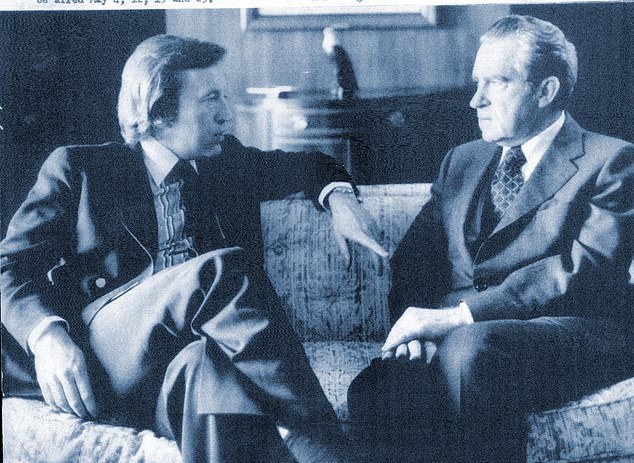 'There was a huge amount of junk — piles of press clippings and files, some garish Sixties furniture covered in dust . . .'

Then there were the tapes. Hundreds of two-inch reels in large canisters that contained priceless footage of Sir David interviewing towering political figures through the ages.

Most were so old and damaged they were unwatchable, literally, but they would trigger an incredible labour of love.

Over the following seven years — during which he also tragically lost his eldest brother Miles at the age of 31, to an undiagnosed heart condition, and his mother Carina battled advanced melanoma —Wilfred painstakingly collated and restored his father's historic recordings.

He explains: 'They had to be taken to a special lab and treated, baked in an oven and digitally restored to be able to be viewed again. It's been fairly exhausting and, at times, emotionally draining but incredibly rewarding.'

Then he adds, poignantly: 'Essentially in the last few years I've spent hundreds of hours with my dad again.'

The result is a new podcast series, The Frost Tapes, featuring interviews with the most 'compelling, controversial and confounding individuals' of the Sixties and Seventies — a time of political polarisation that has many parallels today.

The series is hosted by Wilfred, who ended up following in his father's footsteps and now lives and works in New York as a news anchor for CNBC. It's both a tribute and an education for him. 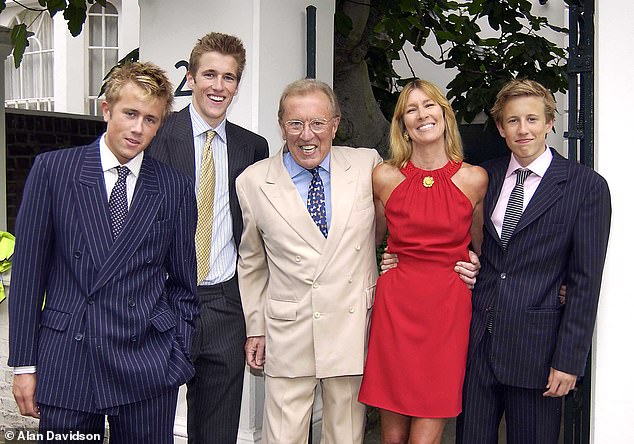 Sir David with wife Lady Carina Frost and their sons Miles, Wilfred and George outside their home in Chelsea, London

'Dad never saw me do anything that was actually broadcast, which is a regret,' he says. 'The other regret, which is probably bigger and in a weird way this project is a way to rectify it, but I never even asked him, 'How do you do an interview?' Or 'What's the key thing?' When your dad's the greatest interviewer in the world, it's a shame.

There's no doubt Wilfred has been shaken by more than his fair share of tragedies in the past decade.

'My mum, younger brother George and I have always said that the grief is the price you pay for love. It doesn't help in the short term but if you can focus on that down the line . . . there's so much pain because there was so much love that preceded it.

His voice trails off as emotion engulfs him for a moment, his eyes suddenly glassy. Composing himself, he says: 'Gosh, I haven't got emotional for a long time . . . I'm genuinely, really surprised. I'm usually quite good . . . There's probably been a lot building up about doing this project.'

He says the really difficult part is not so much watching hour after hour of his late father's work (the most upsetting clips were of David as interviewee proudly talking of his family) but 'it was sort of a pressure, I felt, from wanting to do Dad's legacy justice.'

He recorded well over 10,000 interviews — the most famous of which was in 1977, when he coaxed an apology from President Nixon three years after the Watergate scandal.

It achieved the highest audience for a political interview and was later immortalised in the 2008 Hollywood movie Frost/Nixon. ('By the way,' he adds, 'I've newfound respect for Michael Sheen's voice for Dad in the movie; we used to think it was a bit nasal, for Dad in that period, I now realise it was pretty spot on')

Wilfred is well aware some consider it bold — foolish even — to attempt to emulate his father's career. 'Some people say you can never be as good as him. But I say to that: 'Well, absolutely. Of course I can't.'

In fact it's his father's achievements that propel him on — as well as a keen awareness of life's brevity.

After reading PPE at Oxford, he went into finance before realising he wanted to try television. 'I did get to tell Dad: I remember showing him a couple of clips of some of the stuff I was working on and his face lit up.

I think he was definitely over the moon that I was trying it. That's obviously a very important memory for me.'

Wilfred acknowledges that having grown up surrounded by the great and the good may have helped him feel at ease interviewing everyone from Boris Johnson to Usain Bolt; it's no big deal.

PREV Louisville officer involved in Breonna Taylor's death files lawsuit against her boyfriend
NEXT Troubled girl, 16, takes her own life on school grounds