Britain's complex coronavirus rules have confused even the Prime Minister as numerous different restrictions are put in place across the country to try and keep the number of coronavirus cases down.

Aside from the standard rules in England, eight different regions have additional restrictions or rules that differ from those in place in England.

In total around 16.6m people in the UK are subject to local lockdowns, one quarter of the population.

Among the subtle differences are those between different local lockdown areas in England. For example in the North East, residents are legally banned from meeting people from outside their households inside pubs - but are free to do so outdoors.

In Bolton pubs and restaurants are closed completely and can do takeout only while funerals and weddings are limited to six people. In the North East the weddings and funeral limit remains 15.

Also in Bolton, the government advises residents of these areas not to mix outdoors, but does not ban it.

The devolved regions also have different rules. The rule of six applies to children in England, but not to under 12s in Scotland and under-11s in Wales.

In Scotland the rule of six is limited to people from two households in Scotland. Residents are not allowed to host guests in their own homes, if the guests are from outside their household or support bubble.

In Wales the rule of six is limited to people of up to four households indoors. Outdoors, people can gather in groups of up to 30 but should maintain social distancing from people from other households.

Welsh wedding ceremonies do not have a limit on the number of attendees, but they must wear masks including the bride and groom. Welsh wedding receptions are limited to 30 people.

These are the rules: 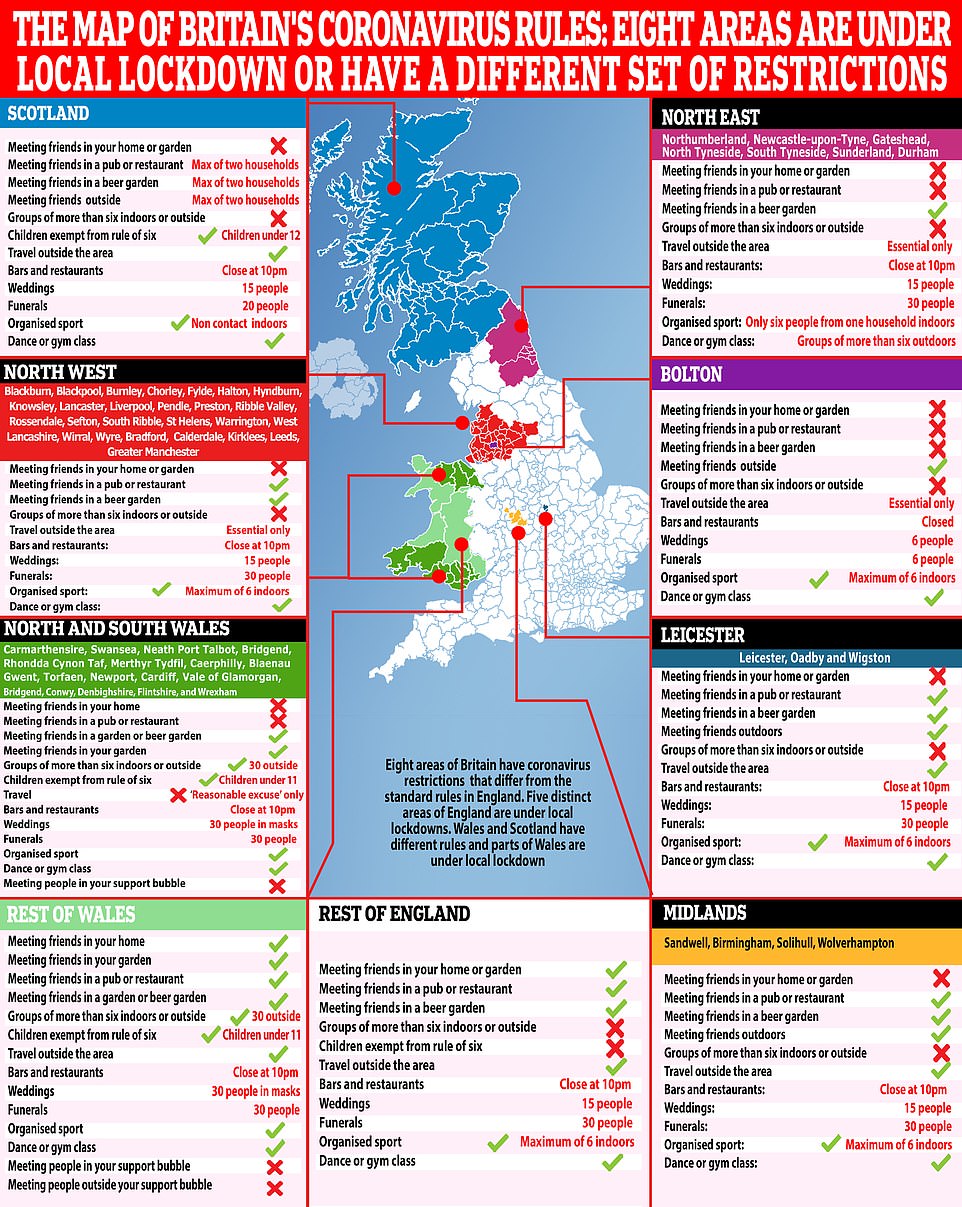 No more than six people are permitted to gather indoors or outdoors - with a few exceptions, which include going to school, work, or 'exceptional life events'.

Children are not exempt from the rules, unlike in Wales and Scotland

Breaking these new restrictions mean fines of £100, doubling for each incident up to £3,200.

Pubs and restaurants across England must close at 10pm. The rule of six still applies but applies to each group inside - not the venue as a whole.

Venues are now 'legally required' to take and keep the contact details of a member from every group of visitors for 21 days. This is so they can pass them on to NHS Test and Trace 'without delay' if needed.

The hospitality venue could face a fine if it fails to stick to the Covid security standards and the Government pledged to back local authorities to make 'further and faster use of their powers' against venues who break the rules.

Covid-19 secure venues, such as places of worship, restaurants and hospitality venues, can still host larger numbers in total but groups of up to six must not mix or form larger groups.

The rule of six limit does not apply to strangers gathering in the same space, such as a train or bus.

Government guidelines say: 'You can help control coronavirus and travel safely by walking and cycling, if you can. However, where this is not possible, you can use public transport or drive.

'If you do use public transport, you must wear a face covering and you should follow the safer travel guidance for passengers.'

The six person limit does not apply to gatherings for work. Offices should take steps to ensure social distancing is maintained.

The government initially urged workers to return to the office, but has since U-turned and called for anyone who can work from home to do so to try to drive down the number of cases.

You can continue to take part in organised sporting or licensed physical activity in groups of more than 6 outdoors and up to 6 people indoors (for over 18s).

Organised dance and exercise classes can take place in groups of more than six, but you must not mix with more than five other participants.

Face coverings have to be worn on public transport, in shops and supermarkets. They are also needed in other indoor venues such as museums, cinemas, galleries and places of worship.

The government also advised people to where them wherever they cannot keep to social distancing guidelines.

Hospitality and retail workers now have to wear face coverings at work, as well as passengers in taxis.

Seven local authorities in the North East are subject to some of the strictest restrictions, which came into force on Wednesday. The affected areas are:

How are the rules different to the rest of England?

Residents are legally banned from meeting friends who are not in their household or support bubble indoors. This includes in their homes or gardens, pubs and restaurants. But it does not include anywhere outdoors including pub beer gardens.

The police will be able to take action against those who break these rules, including asking people to disperse and issuing fixed penalty notices starting at £200 for those who participate in illegal gatherings.

While the rules do not ban people from meeting under the rule of six outside, the government advice states residents should not 'socialise with people you do not live with'. It also advises against visiting care home residents.

Hospitality venues also have to close at 10pm like the rest of the country. It is against the law to sit in a pub with someone you do not live with or is in your bubble.

But this is not law, this is just government advice so it is left to people to judge for themselves what is essential.

Face masks are required for school pupils in Year 7 or above in communal areas in areas.

Same as the rest of England

Same as the rest of England

Sports can be played outdoors with more than six people, but indoors they are limited to six people out of only one 'one household and support bubble', the government say.

Organised dance and exercise classes can take place in groups of more than 6 outdoors, where a risk assessment has been carried out, but you must not mix with more than five other participants.

Same as the rest of the country.

Bolton was put under tighter lockdown measures on September 5 as the stubborn infection rate remained high. At one point the rate increased to 99 cases per 100,000 people per week, which was the highest in England.

People are not allowed to host people from outside their own household or support bubble in their houses or garden.

Meeting outside is allowed, but pubs and restaurants are closed.

Pubs in Bolton are shut to stem a flare-up in infections. They can only serve takeaway, and are obliged to close completely between 10pm and 5am.

People can travel in and out of Bolton for work, education reason or other excuses deemed 'essential'.

Face masks are required for school pupils in Year 7 or above in communal areas in areas.

Same as rest of England.

Same as rest of England.

You can continue to take part in organised sporting or licensed physical activity in groups of more than 6 outdoors and up to 6 people indoors (for over 18s).

In Bolton, a maximum of 6 people should to attend these events. The government says this should be limited to close family of the people getting married or the person who has died, or people who live(d) or formed a support bubble with them. A close friend can attend a funeral only if there are no household members or immediate families.

From 6pm on Thursday, residents of Denbighshire, Flintshire, Conwy and Wrexham will be banned from mixing indoors with other households - affecting 500,000 people. The full list of Welsh areas in lockdown include:

How do the rules differ from England?

In the Welsh local lockdown areas meeting anyone from outside your own household indoors is banned.

Meeting them in gardens or outdoors is allowed.

However people are allowed to gather in groups of thirty outdoors - including in private gardens.

Outside the local lockdown areas, the rule of six applies indoors in Wales but is limited to people from four different households.

The rule of six in Wales applies only to children 11 and over.

In the Welsh local lockdown areas travel to another area is banned unless an individual can provide a 'reasonable excuse'. This can include going to school or work.

If the individual cannot provide a reasonable excuse they can be fined and prosecuted by the courts.

Pubs and restaurants must close at 10pm and can provide table service only.

Schools are unaffected by the Welsh local lockdowns. All children over 11 are advised to wear masks in indoor public areas.

The Welsh local lockdowns do not affect the rules on working from home. The Welsh government advises employees to work from home wherever possible and should not return to the