Terrified residents prepare to flee their homes over fears the nearby dam may BURST - as police and SES workers go house to house warning neighbours of the danger Residents of Pintail Drive, Torquay on high alert for evacuation at midnight  Concerns about a nearby dam on Horshoe Bend Rd, thought to be a flower farm  Resident says Victoria Police knocked on her door and gave her an hour to pack 'It's 180,000 megalitres they're worried will just seep out and burst completely'

Terrified residents are preparing to flee their homes over fears a nearby dam could burst any second.

Emergency crews swarmed Torquay, Victoria, at midnight on Friday as concern was raised over the leaking dam.

Kate Earnshaw, a resident of Pintail Drive, Torquay, said emergency services had briefed them about the issue about 9pm on Friday. 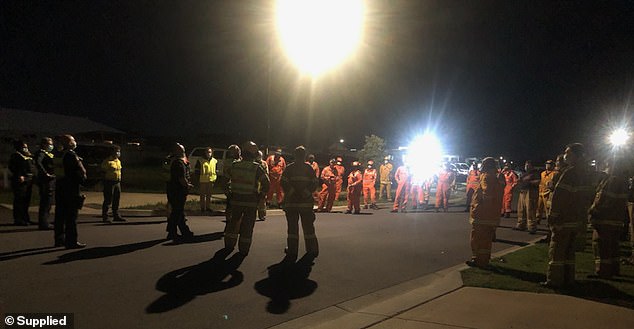 State Emergency Service volunteers and firefighters standing on Pintail Drive, Torquay at midnight on Friday as they prepared for potential emergency evacuations over fears a nearby dam could collapse. Picture: Kate Earnshaw

However, at 11pm they returned to tell the residents to pack their bags and get ready to evacuate if necessary within the hour, Ms Earnshaw said.

At 12.30am on Saturday morning, the mother-of-two spoke to Daily Mail Australia as she stood outside on her street with her bags packed watching the dam wall nervously.

'I'm just standing here with my neighbour,' she said.

'It's 180,000 megalitres of water, that's 20m deep, that is seeping out at the edges at the moment and they're worried that the edges are going to drop, and that it will just seep out and burst completely.'

PREV White cop not charged in Chicago-area killing of Black guard
NEXT Troubled girl, 16, takes her own life on school grounds

The US doesn't 'do left': Readers respond to Switzer's Biden concerns mogaznewsen