The tension was obvious at the wedding of Sam and Phoebe Burgess in the picturesque New South Wales Southern Highlands in December 2015.

While there were smiles on the faces of the bride and groom as they walked up the aisle hand-in-hand, within hours guests would be wondering if things would last.

Corporate high-flyer Mitch Hooke and his wife Sarah had opened the gates of the family farm up to Australia's elite - business leaders, politicians and socialites - their kind of people.

Also now among them were rugby league players and friends of their new in-laws, the blue collar Burgess clan raised in a rough part of North England.

And by the time the eldest Burgess brother had given his best man speech, a crack in the unlikely union had already appeared, with Luke loudly 'shooshed' by Mr Hooke. 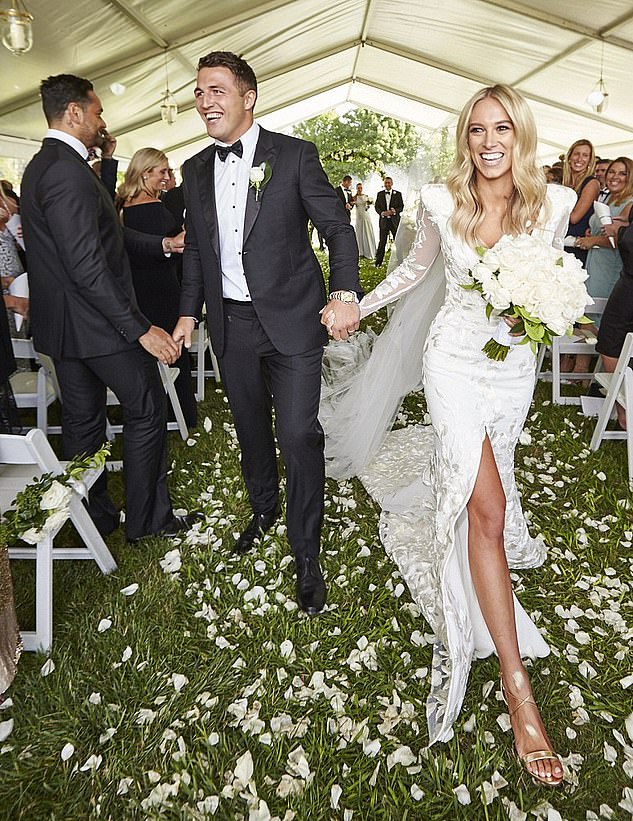 Sam and Phoebe married in a lavish ceremony at her parents estate in the Southern Highlands in 2015, but within hours the tension between their two families was evident with guests left to wonder if things would last 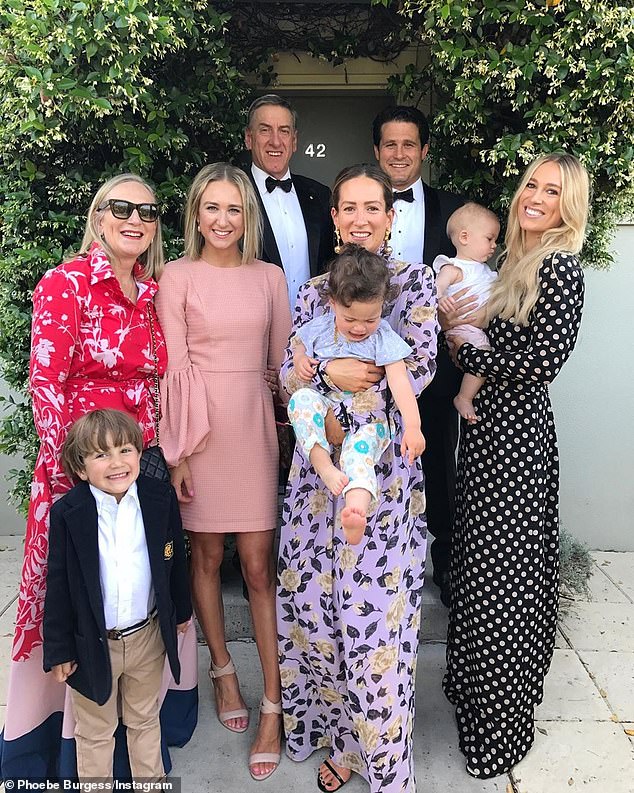 The Hooke family has closed ranks around Phoebe since she split with her husband. The Hooke women are pictured left to right: mother Sarah, and sisters Harriet, Jemima and Phoebe with father Mitch at the back

At the reception Sam's friend and former teammate Luke Keary reportedly got into a confrontation with Gene Fairbanks, a onetime rugby union star and Phoebe's brother-in-law.

An argument had apparently started when someone from the rugby group at the party referred to league players as 'more betters', suggesting they speak with poor grammar.

The same farm was the location of an alleged incident in October last year which led to police taking out an interim apprehended violence order on behalf of Mr Hooke against his son-in-law.

After bombshell allegations about Sam Burgess were printed in The Australian last week, the relationship between the two families deteriorated further.

On Wednesday the South Sydney legend's lawyer in court accused Phoebe or Mr Hooke of giving a damning statement about Burgess to the newspaper out of 'malice or retaliation'. 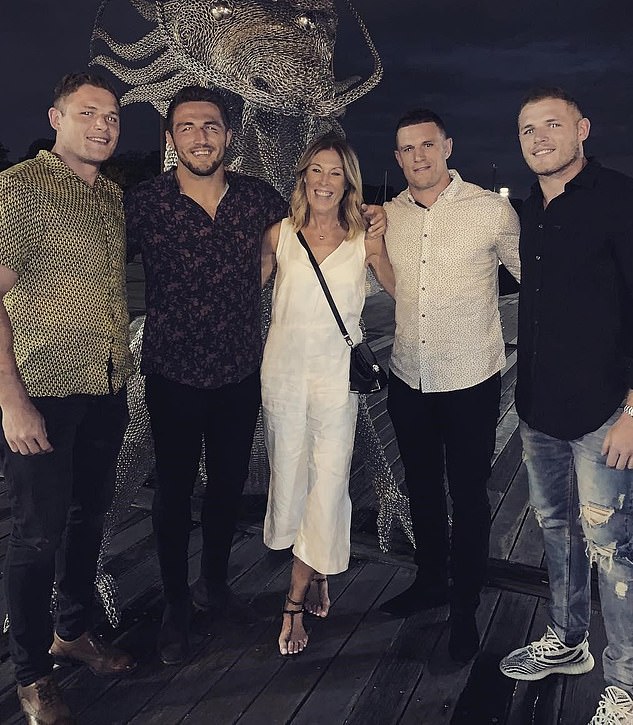 While the Hooke's grew up living a life of luxury, the blue collar Burgess clan came from North England where the family matriarch Julie (centre) admits that 'money was tight'

Both families have closed ranks and the gulf between them seems wider than ever.

While Sam and his brothers attended a mixed school in West Yorkshire, Phoebe and her two sisters went to Frensham, an all-girls school that costs up to $35,000-a-year.

Like his daughters, Mr Hooke had gone to a private school, boarding at Geelong College with his brothers while his father - a World War II pilot - worked a sheep farm.

After being lured to Canberra he secured numerous high-paying jobs and set up the family at their Southern Highlands property, Daffodil Downs.

About the time of Phoebe's graduation her conservative-leaning father, now a key powerbroker in Canberra, was making major waves in Australian politics.

He was made a Member of the Order of Australia in 2016 in acknowledgement of his 30 years in public life. 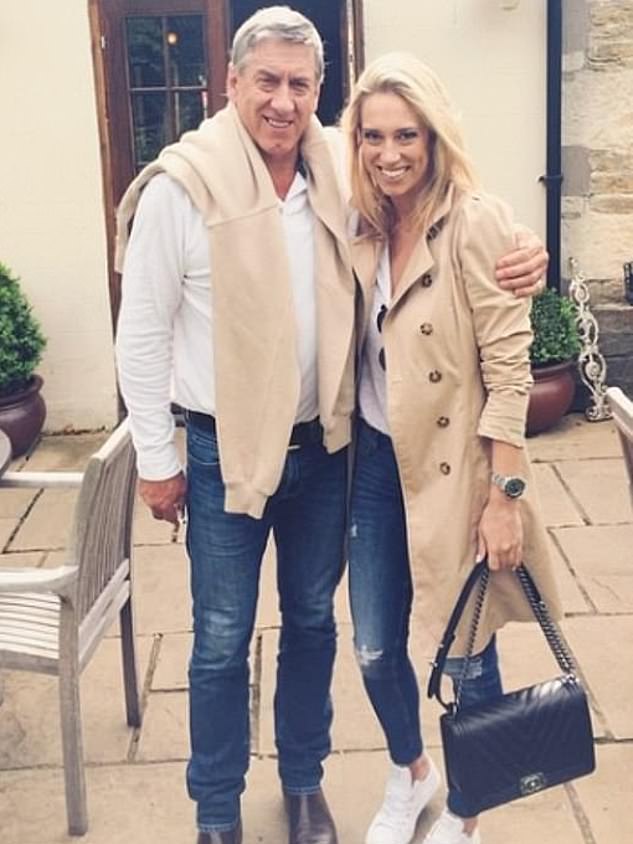 About the time of Phoebe's graduation her conservative-leaning father (left), now a key powerbroker in Canberra, was making major waves in Australian politics 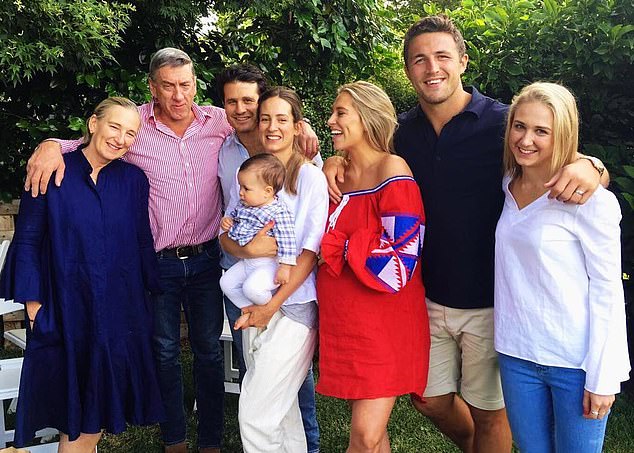 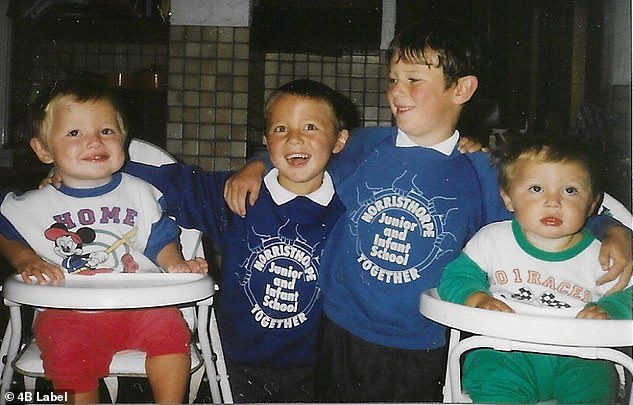 Sam (second from the left) and his brothers are inseparable even today, and have always shared a close bond 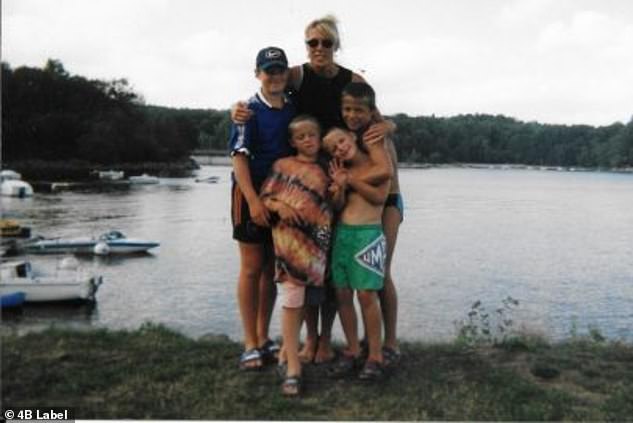 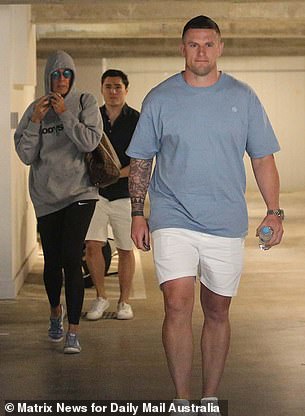 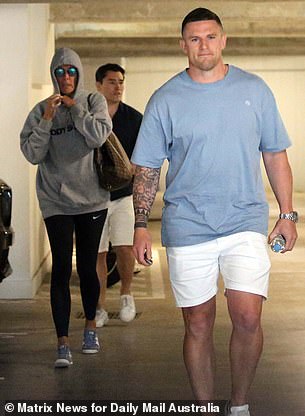 Sam denies all allegations levelled against him, which relate to an ongoing court case involving him and ex-wife Phoebe's father Mitchell Hooke (Julie Burgess is pictured on the left, her eldest son Luke is at the front and lawyer Bryan Wrench can be seen at back) 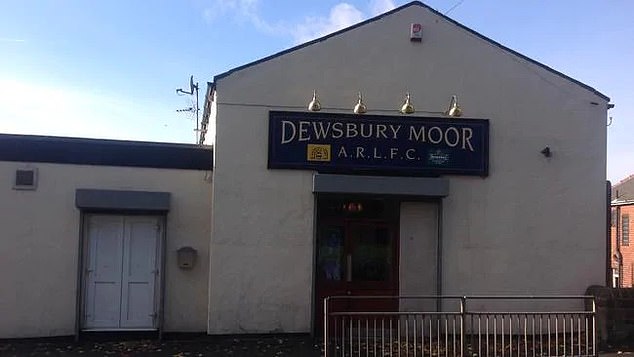 The rugby league club in Dewsbury, West Yorkshire, where the Burgess boys learnt their craft

In contrast to the Hooke family story, Julie Burgess admits that when she and late husband Mark were raising four boys there was little money to spare and the lads regularly wore hand-me-down clothes.

WHO ARE THE BURGESS FAMILY?

JULIE: A former high school deputy headmaster, the matriarch of the family is renowned for defending her four boys, always. She followed her sons to Australia in 2012 after they had established careers with South Sydney

MARK: The boys' father died in 2007 at age 45 after a long battle with motor neurone disease. While their towering height comes from Julie, Mark is credited for giving the boys their brawn and toughness.

LUKE: The oldest of the four boys, he is known to his brothers as 'Biffa'. Luke moved to Australia in 2011 to play for South Sydney. He began dating model Yolanda Hodgson and the couple have a daughter Grace, but split in 2019.

SAM: The first of the family to make the move to Sydney, he quickly became a key part of the Rabbitohs outfit. After a few years together he married Phoebe Hooke in 2015, before their public split in late 2018. They have two children, Poppy and Billy.

TOM: Tom and his twin brother George are the youngest members of the family. He was the last of the family to move to Australia in 2011. He is engaged to Tahlia Giumelli and the couple are currently expecting a second child.

GEORGE: The 28-year-old has returned to England to play in the Super League having married wife Joanna in 2016. The couple have three children under the age of three. 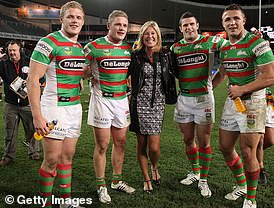 Tom, George, Luke and Sam Burgess stand on either side of their mother Julie after their first appearance in first grade together in 2013

'As the mum of a young family with four boys aged under 5 growing up in the North of England, money was tight,' Mrs Burgess admitted earlier this year.

'I loved to dress the boys in the same outfits, especially the twins!'

Life got even harder in the early 2000s, when Mark Burgess was diagnosed with motor neurone disease.

In the years between his father's diagnosis and death, Sam nursed him through the worst days.

He would carry his ailing father upstairs to bed every night after the disease made it too difficult to walk, and financially supported the family as best he could.

The experience made him 'colder', Sam admitted back in 2014.

The four brothers rallied for one another and their mother, with Sam leading the family on their move to Australia in 2010.

Sam was wooed to South Sydney by the Rabbitohs' famous owner, Russell Crowe, who invited him and Julie onto the set of Robin Hood while he was filming in England.

He was followed to Sydney by Luke, and twins George and Tom. By the time mum Julie arrived in town in 2012, the Burgess name was arguably the most famous in rugby league.

In 2014, the four brothers,  helped secure South Sydney a premiership drought-breaking title. Sam's name will forever be etched in the game's history for his epic Clive Churchill medal winning performance that saw him play with a broken cheekbone.

Now they all drive flashy cars and have homes in some of Sydney's best suburbs and have their own clothing label, 4B, which is for 'Four Brothers'.

While Sam remains hunkered down inside the Coogee apartment he shares with his older brother Luke, his lawyer Bryan Wrench took the Hooke family to task in court.

Mr Wrench told Moss Vale Local Court Phoebe Burgess or her father Mitchell Hooke might have committed contempt of court by co-operating with the media.

At the same time Mr Wrench was making the allegations in court, just a 10-minute drive away it was business as usual at the Hooke farm.

Mr Hooke emerged from bushes at the front of the property when approached by Daily Mail Australia then retreated up the gravel driveway steering a ride-on mower.

He was joined at the stables by his wife Sarah and a cattle dog. 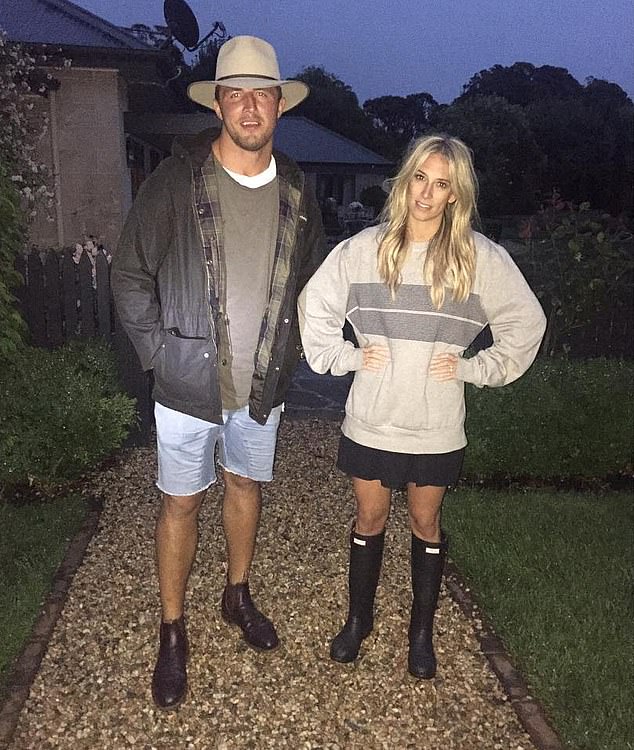 Fitting in with the country life in happier times, Sam and Phoebe pose for a photo in their wet weather gear 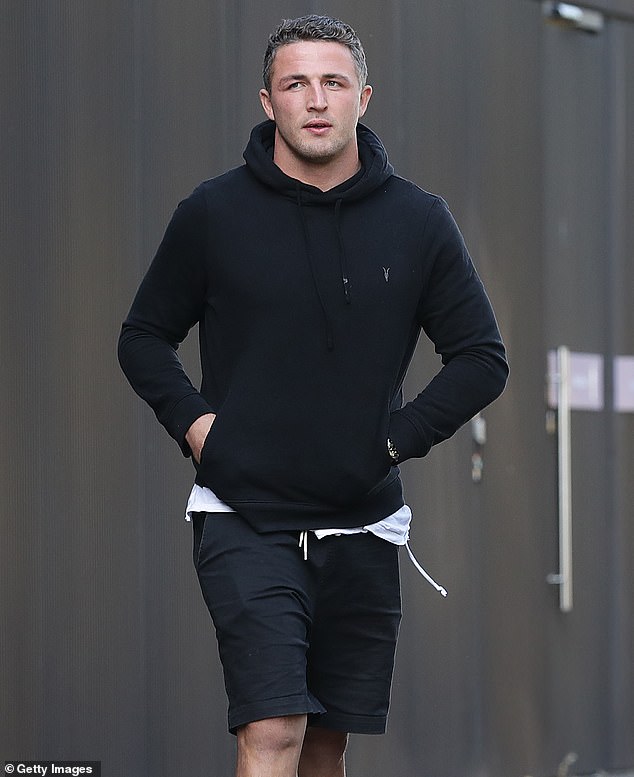 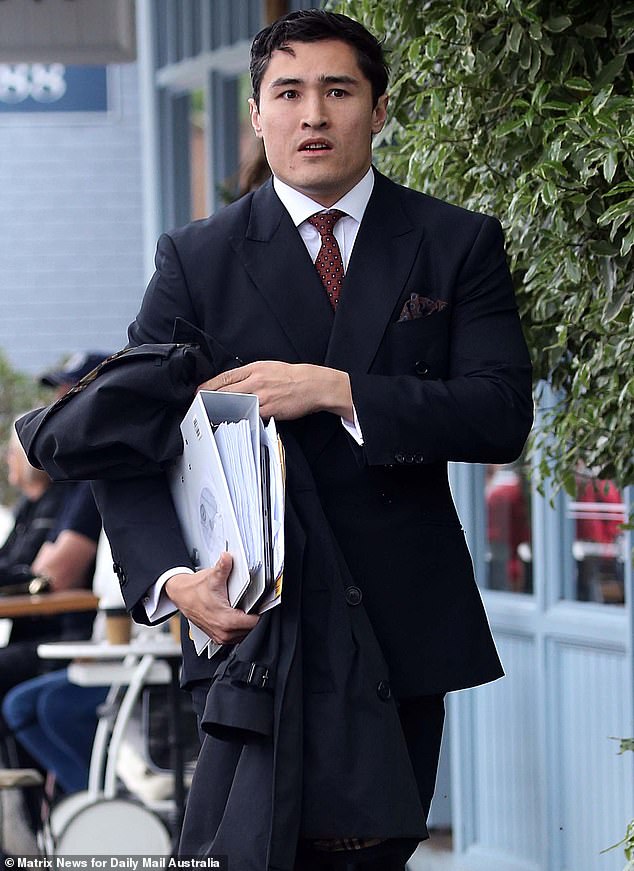 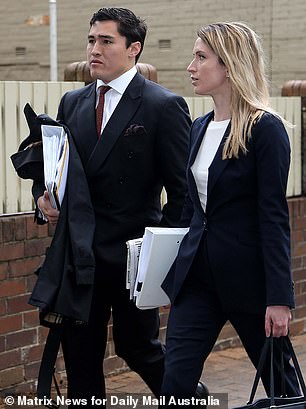 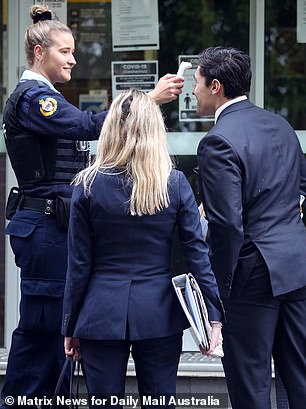 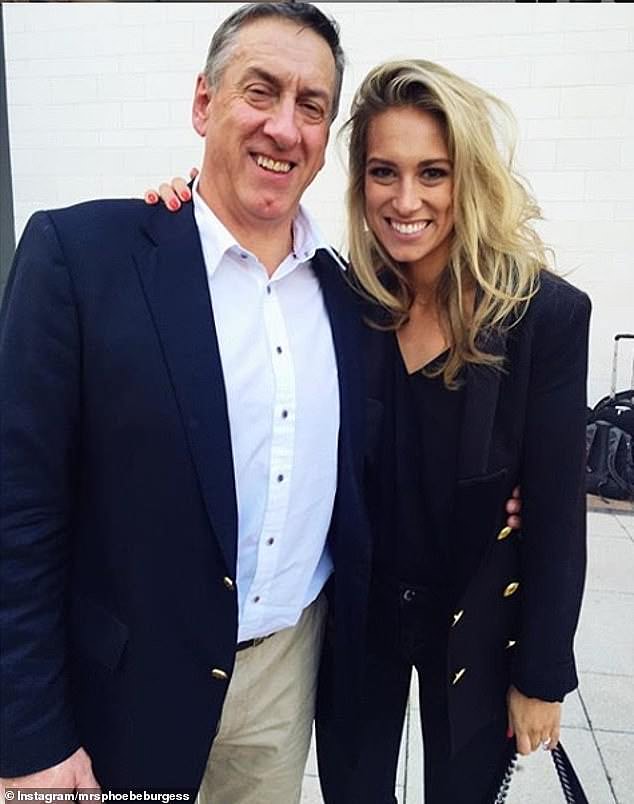 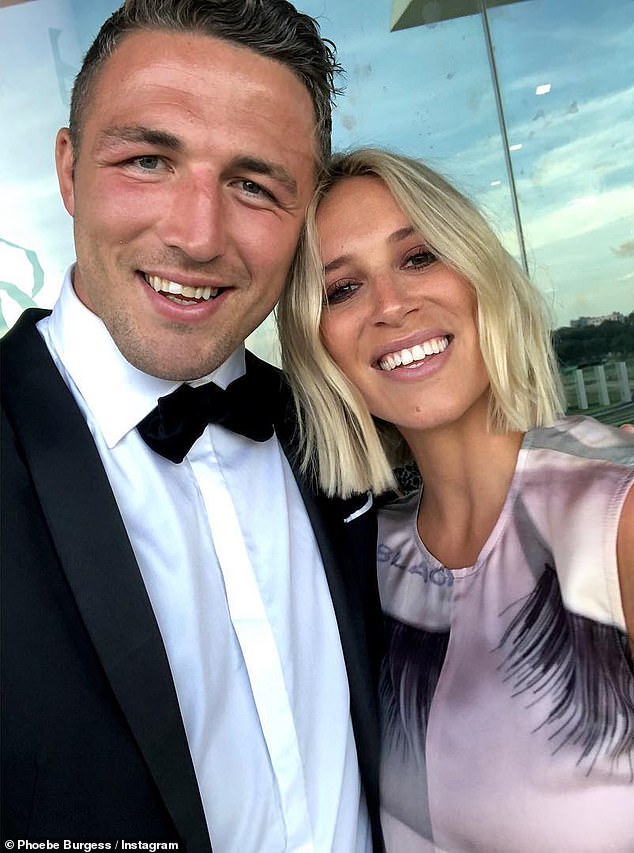 PREV Owner of a working mill says plan to build 120 new homes nearby will block the ...
NEXT Troubled girl, 16, takes her own life on school grounds