She was gorgeous. The young bride in the photograph caught my eye, but who was she? What was her story? The picture of the wedding of Sonya Paynter and Tim Bryant in 1959 that started the hunt

She was gorgeous. The young bride in the photograph caught my eye, but who was she? What was her story?

I picked up the print on a whim, from a pile of lost black-and-white wedding portraits we had found and bought online.

They were all of total strangers and this one had probably become detached from the family when somebody died and their house was cleared.

I had no idea it would lead to an astonishing tale of high-society scandal, wild parties, free love, fortune-hunters, crime and even a killing.

Einstein, Marconi and Lawrence of Arabia all feature in the story – as does Mary Wesley and her racy novel The Camomile Lawn, which we would learn was inspired by the world into which the bride in the photo was born.

This all started because my friend Charlotte Sibtain collects vintage wedding pictures from junk shops and online auctions and posts them on her Instagram account – part of the growing trend for younger people to be fascinated by the images and styles of the past.

As a journalist, she asked me to help her identify the people in the photos, uncover their stories and find out more about those featured in lost albums and pictures and – where possible – reunite these precious images with somebody who will love them.

Together, we are the wedding Detectives and have a new Radio 4 series of the same name.

Our first case turned out to be far more startling than we could have hoped when we spread the pile of albums and photos on Charlotte’s carpet and chose one at random. The bride looked like a Hollywood starlet in her sleek 1950s dress with a waspish waist. The groom was a handsome older man in morning dress with his hair slicked back.

The only clues to their identity were a few words written by hand on the back of the print: ‘Sonya and Tim Bryant, St Peter’s Eaton Square.’

There was another photograph of the bride, too, with a much older man who appeared to be giving her away. His name was written as Paull, with two Ls – an unusual spelling we thought might be a clue. 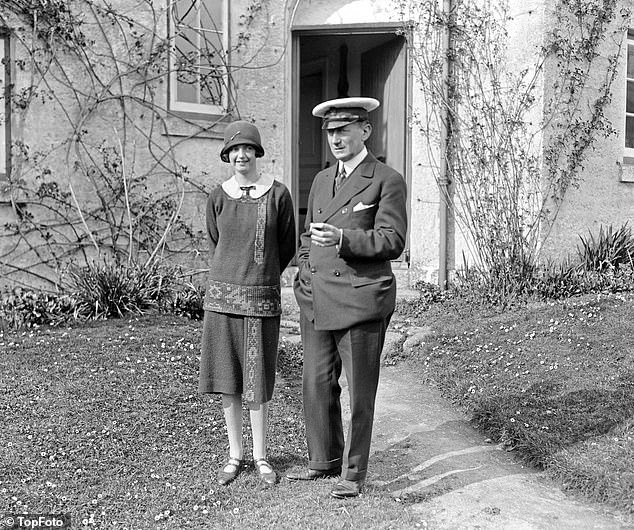 First, I searched the marriage records for the posh part of London where the wedding was held and found an entry for Timothy Bryant and Sonya Diana Fleur Paynter in December 1959.

Was this our couple? The marriage certificate showed that Tim was a 29-year-old company director, the son of a barrister, while Sonya was only 19.

Confirmation came when a long search online revealed a passing reference to Sonya who was the daughter of the gloriously named Elisabeth Narcissa Marie Paynter, known as Betty. Suddenly, things began to match. Betty’s second husband was Paull Hill, with that unusual spelling. Apparently, it’s Cornish.

This was the right family. The writing on the back of the photos seemed to be by the bride’s mother Betty, who, we would discover, had an extraordinary life.

Betty grew up in the far west of Cornwall, in a big house called Boskenna run by her father, the eccentric Colonel Paynter. Their family had been there for hundreds of years and owned most of the land in that finger of England west of Penzance, which is Poldark country.

The house still stands and the current owners kindly let us visit. They told us that when a relative bought the house in the 1950s, he tried to flatten the lawn for a tennis court but found it bumpy with hidden champagne bottles, which had been thrown out and left for the grass to grow over.

That was a clue to the epic parties held from the 1920s to the 1940s, when Colonel Paynter invited artists to live on his land and all manner of famous and infamous people came down.

She was also quoted, saying: ‘Lawrence of Arabia would roar up and down the drive on his motorcycle and he was quite mad about my mother. Einstein would come over when I was a small child and explain his complicated theories to me. D. H. Lawrence [author of Lady Chatterley’s Lover] would come here.’

What were they all doing there? Well, Boskenna was a long way from the gossips of London. The Colonel was a discreet and generous host. But this was also a place where thrilling things happened.

The scientist Marconi had built huge wireless transmitters nearby and sent the first signals to America and Australia. The Italian had other things on his mind, too, we discovered. Newspaper archives revealed he caused a sensation in 1925 by getting engaged to Betty, who was 17. Marconi was in his early 50s.

We found a picture of them together, with her in a flapper outfit and him dressed in the naval cap and double-breasted blazer he wore aboard his fancy yacht. They had been on a three-month cruise of the Mediterranean together and been seen dining at the Savoy.

A royal letter of a different kind mogaznewsen