Prostestors clashed with police in Naples tonight as a curfew was imposed to curb the growing spread of coronavirus.

Hundreds of activists, many wearing face coverings, took to the city's streets this evening to oppose a lockdown being imposed to tame the virus as new infections hit a record high.

Videos show crowds of people chanting and marching through the city centre, with car horns tooting in the background as demonstrators looked to make their case against the curfew, with similar restrictions also in place in Rome and Milan.

COVID-19 cases across Italy have risen seven-fold since the start of the month, jumping to 19,143 on Friday and raising fears that the pandemic is spiralling out of control.

The number of deaths is also climbing, albeit at a slower rate and less constantly. Fatalities totalled 91 on Friday, down from 136 the day before and far fewer than at the height of the first wave in March and April, when a daily peak of more than 900 deaths was reached.

But Italian law gives regional leaders leeway to establish their own curbs. Vincenzo De Luca, the head of Campania, based in Naples, has set the pace, shutting schools and announcing a nighttime curfew. Today, he said even more was needed. 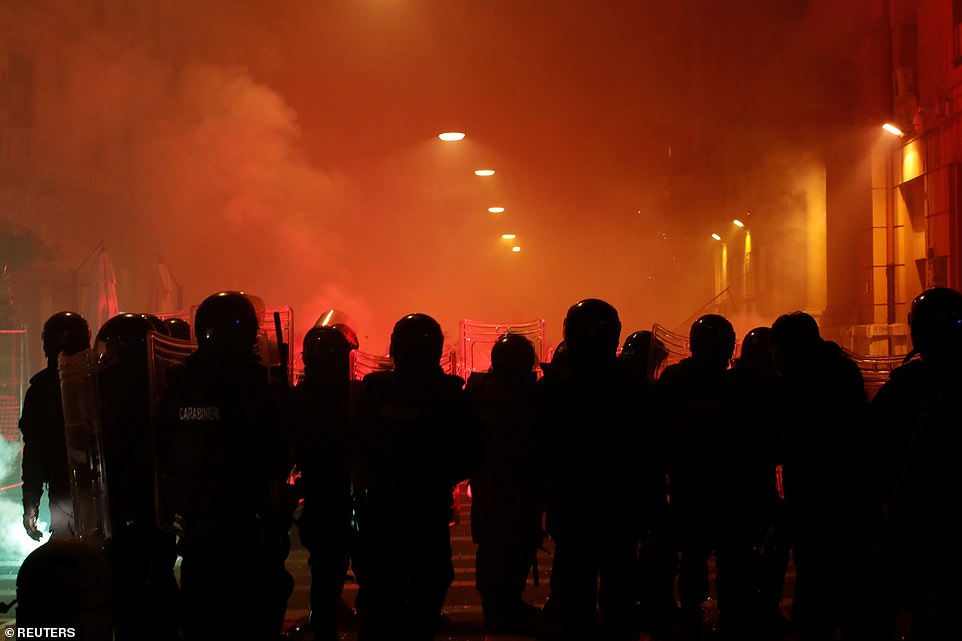 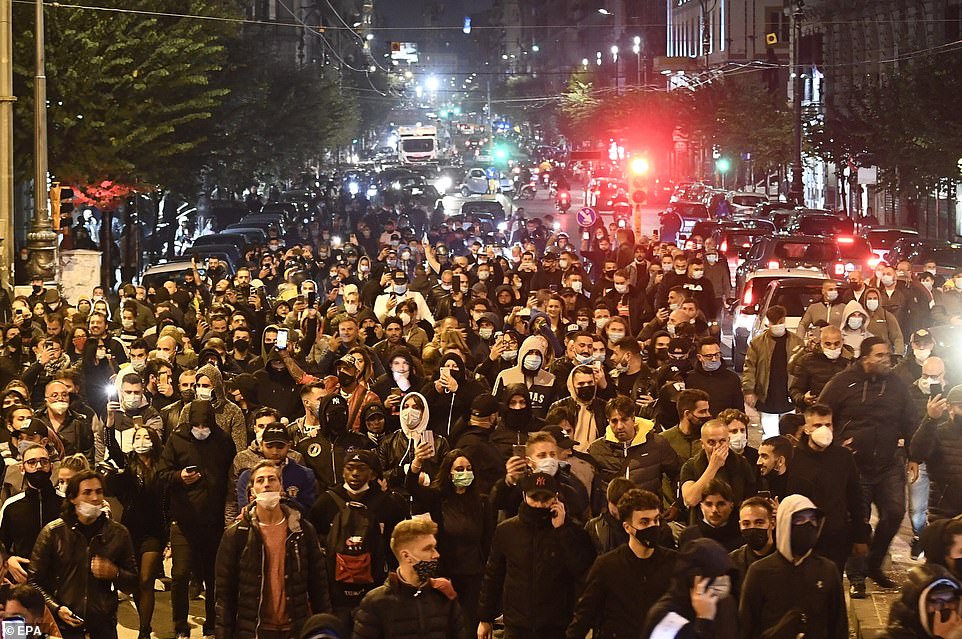 Hundreds of activists, many wearing face coverings, took to the city's streets this evening to oppose a lockdown being imposed to tame the virus as new infections hit a record high

'Current data on the contagion make any kind of partial measure ineffective. It is necessary to close everything, except for those businesses that produce and transport essential goods,' De Luca said on Facebook.

'We need to make one last effort to get things under control. We need to shut everything down for a month, for 40 days,' he added, without saying when the shutdown would begin.

The governor of Lombardy, which includes Italy's financial capital Milan, said on Friday his region faced a 'dramatic situation' and urged locals to respect a curfew that runs from 11pm to 5am, amongst other measures.

Lombardy, the epicentre of Italy's initial outbreak, remains the hardest hit region, accounting for 4,916 of the new cases on Friday. Campania was the second-worst hit, with 2,280.

Underscoring the growing concern, a group of prominent scientists and researchers urged the government to take immediate, forceful action at a national level, warning that hundreds might die each day without a tougher strategy.

'The longer you wait, the measures you eventually take will have to be tougher, last longer and thus inflict a greater economic impact,' the 100 academics wrote in an open letter to Conte.

By contrast, the streets of Rome and Paris were deserted tonight,

The streets of some of Europe's biggest cities were deserted tonight as curfews to battle the second wave of coronavirus come into effect.

Restrictions are in place in Rome and Paris in a bid to limit the spread of Covid,

Italian authorities tonight began enforcing a five-hour curfew for the next 30 days in Rome, as police flooded the capital's streets to move on anyone still in the city after 9pm.

In Paris, where rules prohibiting people leaving their homes between 9pm and 6am without a valid motive have been in place since October 14, the roads were again eerily quiet, with famous landmarks such as the Eiffel Tower left deserted.

Mirroring scenes in Cardiff earlier today, where a 17-day firebreaker lockdown began, pubs and restaurants packed away outdoor seating and shut up shop at a time on a Friday night where business would normally be booming. 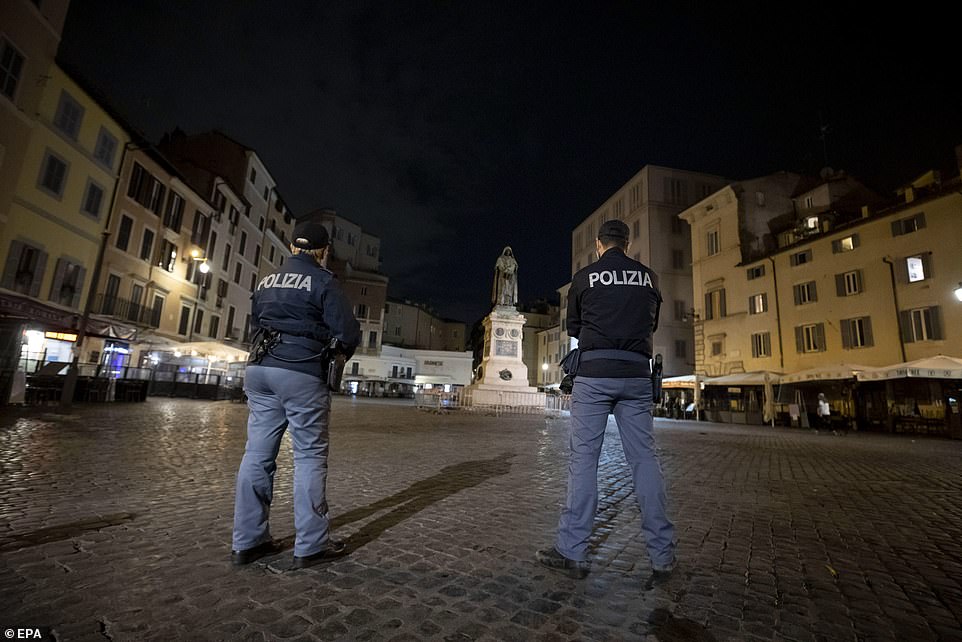 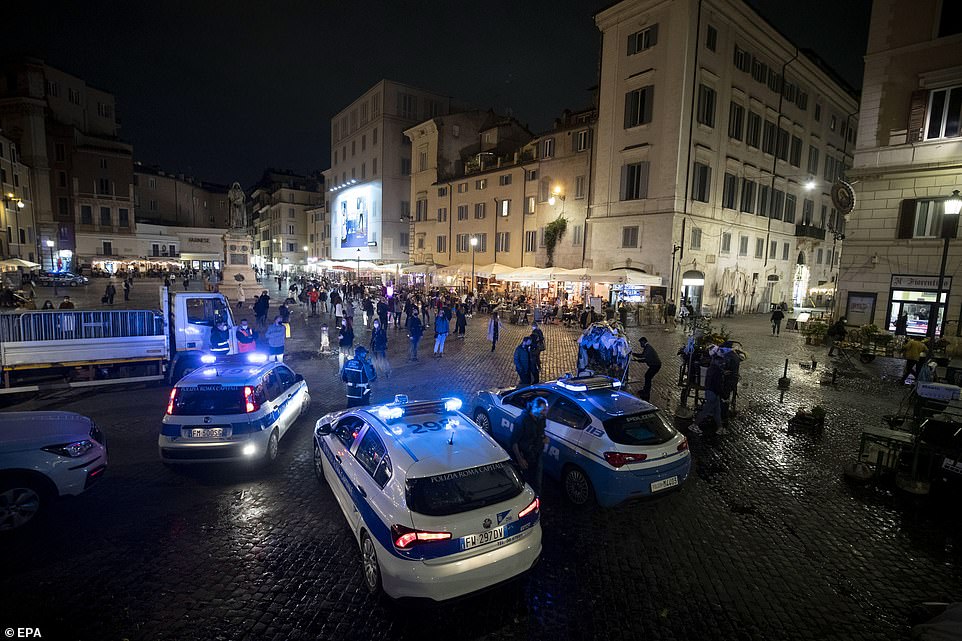 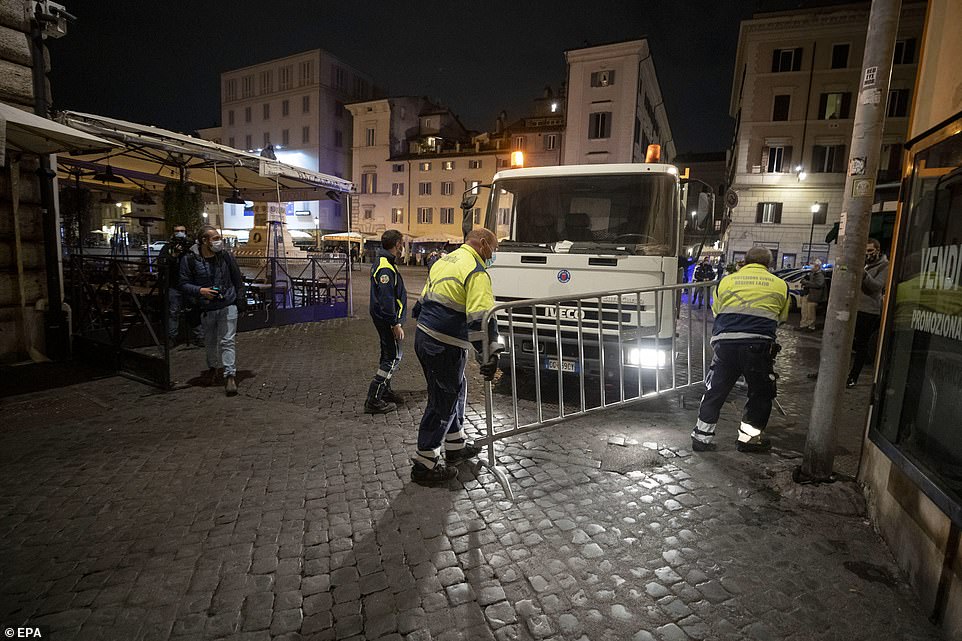 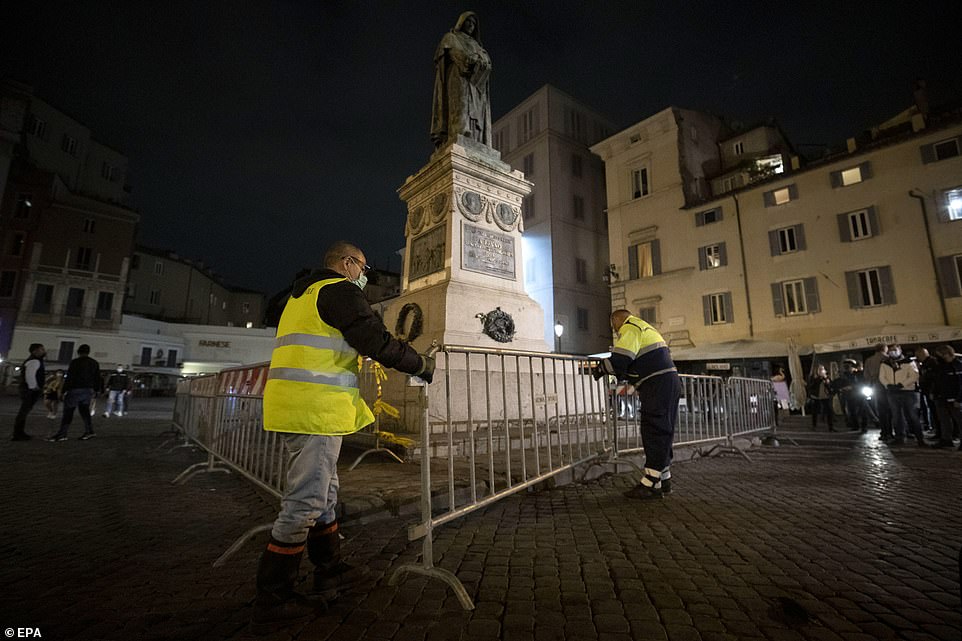 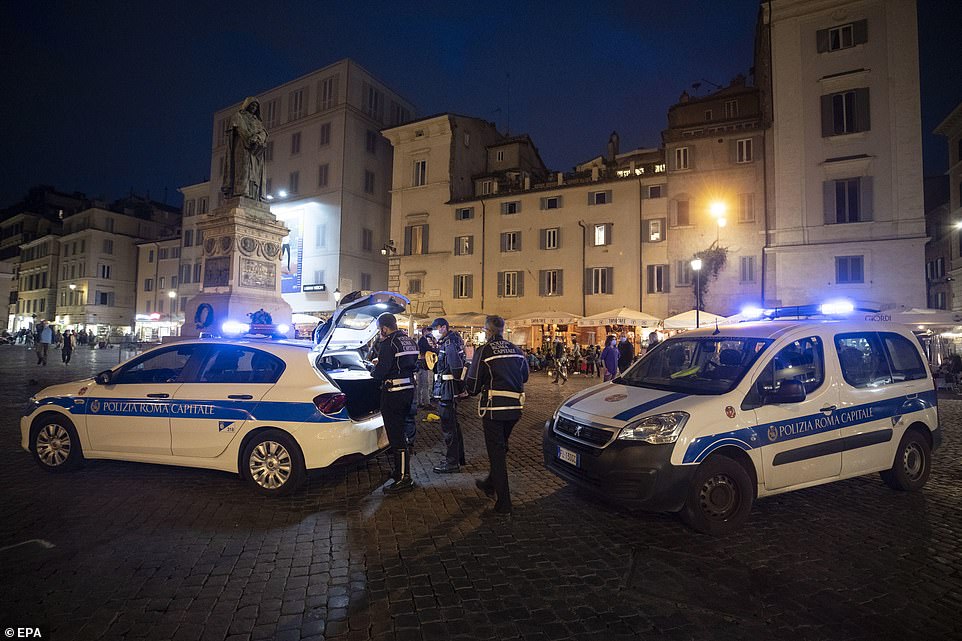 The new curfew in Rome comes as the number of cases across the continent hit 200,000 in a day for the first time 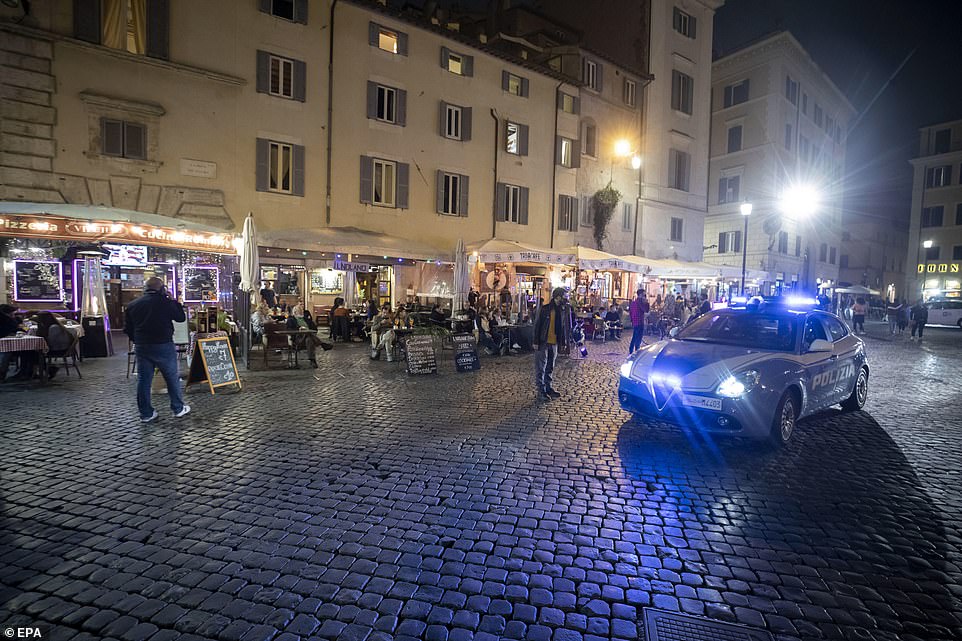 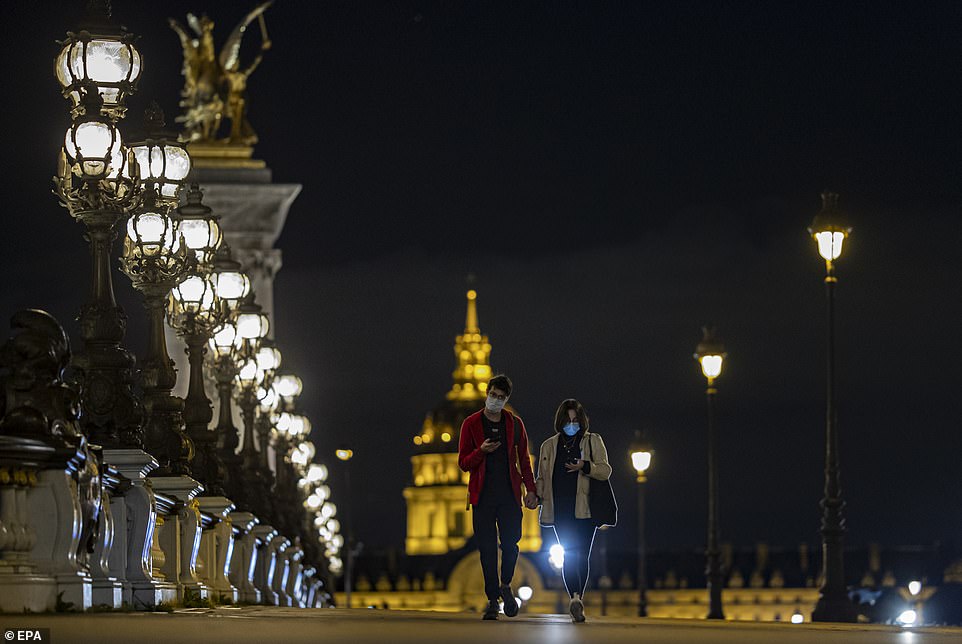