A hero father pulled a family of six including two children to safety and gave life-saving CPR after they were swept out to sea off Cornwall.

Kevin Viles, 44, was walking near Godrevy Point, Gwithian, on Tuesday afternoon when a whole family got into trouble off the coast.

The group has been standing on rocks when six of them were swamped by large waves and ended up in the water.

Mr Viles dramatically intervened by pulling all of them out and resuscitating one woman before emergency services arrived. 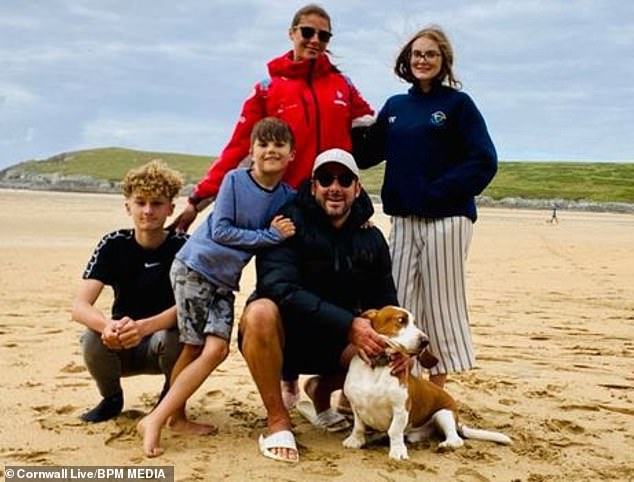 Kevin Viles, 44, (crouching in the cap) was walking near Godrevy Point, Gwithian, on Tuesday afternoon when a whole family got into trouble off the coast. He is pictured with his family, including his partner, Lisa. His children are Kaitlin, 16, (top right) and Fletcher, 9 (left - in blue)

Mr Viles, a businessman from Blackwater, said the ordeal was 'the worst thing he's lived through' as he was convinced that some of the group would die.

He said: 'We were walking the dog and walked there to see the lighthouse because my son is doing a school project about lighthouses.

'We were taking videos when my partner Lisa ran up to me saying: 'There are people in the water'.

'There were about six people out in different depths, two men in the shore who looked like they were drowning.

'There were two children, about six and eight years old, a boy and a girl.

'They were being tossed around in the waves. I can't really remember how I dragged them up. None of them had any energy.'

While Mr Viles was attempting to save the family, his partner Lisa, 37, alerted the coastguard at around 2.45pm.

The couple said one girl, aged roughly 12, was vomiting and collapsed afterwards.

Mr Viles said: 'I was passing them to my family and my family was helping them up the steps.

'A woman washed in, face down. The men wanted to help, but they were helpless, they were exhausted.

'It felt like she was gone. We had waves crashing over us still. I tried to give her CPR but her jaw was locked.

'Someone gave her chest compressions while I was trying to wake her up.