Don't look down! Workman dangles 150ft up as council sends ABSEILING team to remove windowsill plant pots - all in the name of health and safety Camden Council sent tenants a letter telling them to remove their window boxes  Warning letter said the pots were 'dangerous' and residents had eight days to act A housing officer said if the offending items were not removed by November 27 - the council would send in its 'rope access team' to clear them  He proposed a team of workmen abseiling down the six story block to take them  So when tenants saw a harness-wearing contractor dangling 150ft up on Friday morning they assumed it was the council carrying out its threat In the event, the Town Hall had made a last-minute U-turn and was simply carrying out some roof repairs Regardless, tenants of Gordon Mansions, central London, were unimpressed by the threats

By Nick Fagge For Mail Online

A workman dangles 150ft feet in the air after a council sent in its 'abseiling team'  to remove 'dangerous' window boxes from a block of flats – all in the name of health and safety.

Tenants at the central London block were met with the nerve-jangling sight of the workman wearing a harness and hi-vis jacket six floors up on Friday morning.

Camden Council sent residents of Gordon Mansions a letter giving them eight days to remove their plant pots - or the 'rope access team' would take them.

In the sternly worded warning to residents calling the pots 'dangerous', housing officer Abdulrahman Gesod warned they had until November 27 to remove them.

'The Council's Health and Safety department has assessed plant pots on window sills and balcony ledges and it was determined there is a demonstrable risk to pedestrians when pots are placed on such areas higher than the ground,' he wrote. 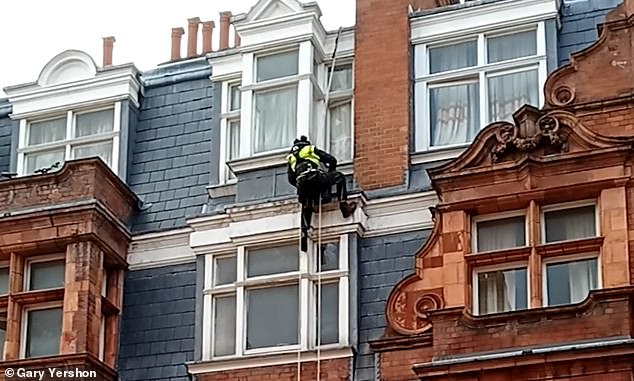 A workman in hard hat, hi-vis jacket and harness abseils down Gordon Mansions, central London on Friday morning - after Camden Council threatened to use its 'rope access team' to clear window boxes in the name of health and safety 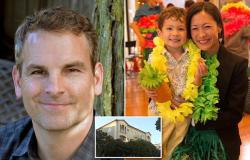