Furious delivery driver walks off with customer's food because he only gave her an $8 as a tip when ordering from one town over to his Long Island home The wild encounter was captured on a Ring doorbell in Smithtown, New York, but it is unclear on when exactly the incident occurred An irate driver voiced her displeasure with having to drive 40 minutes from the next town of Commack While she claimed the drive was over 12 miles long, Google Maps indicate that the distance is roughly seven miles away and just under 15 minutes 'I feel that is still very far, so you need to adjust your tip to make it right,' she declares. 'You gave an 8$ tip'  The customer scoffs at the notion, prompting the driver to take the food with her back to the restaurant in Commack

A food delivery driver refused to deliver food to a Long Island home after throwing a temper tantrum over an $8 tip that she felt was too low given the journey she took.

The wild encounter was captured on a Ring doorbell in Smithtown, New York, but it is unclear on when exactly the incident occurred.

In the clip, the woman can be seen ringing the bell and trying to get the residents to come out so she can speak to them.

'I don't think you realize where it is coming from so I need to speak with you,' she says to a man who is completely confused by the extended encounter. 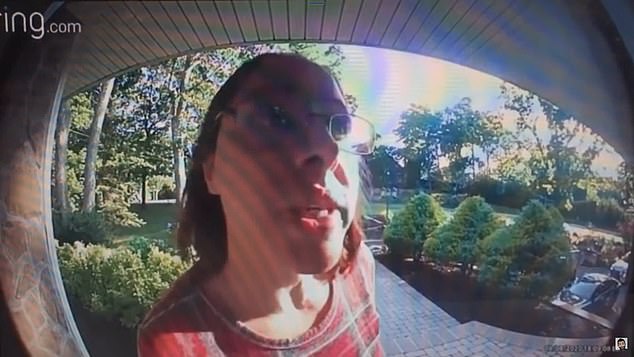 The wild encounter was captured on a Ring doorbell in Smithtown, New York, but it is unclear on when exactly the incident occurred

The woman continues:  'I don't think you realize the distance that it comes from because then you would have never given what you gave. So I think you can come see me face to face.

The woman then explains that she drove 40