The boss of one of Britain's largest pub chains has argued that there is now 'zero chance of the NHS being overwhelmed' because the government's modelling has been proved wrong by hard data on the vaccines.

Hugh Osmond, chief of Punch Taverns and formerly Pizza Express, said that Boris Johnson's roadmap was costing his industry £200 million each day on the basis of projections which now lag weeks behind the actual figures which prove the scientists were wrong about vaccines, hospitalisations, cases and deaths due to Covid-19.

'We were told it would be data not dates,' Mr Osmand told Radio 4 this morning. 'Well now we have some very hard data which the government has not denied.

'So there is now zero chance of the NHS being overwhelmed, simply because of all this data is further ahead of any of the models used.'

It comes after Sage analysis yesterday admitted that the risk of catching coronavirus in a pub or restaurant is 'relatively low.'

Sage found there had been just 226 outbreaks in pubs and restaurants in England since the pandemic began, despite the sector being heavily penalised throughout the Government's Covid response.

Britain's world-beating vaccine drive has meant just one in 1,000 people in England now have Covid, and the R rate is still below 1.

The drop in figures means the government will likely approve the next stage of England's lockdown easing on May 17, but Mr Osmond says that this date should have been brought forward.

He told the BBC: 'It's reaching the stage where it's becoming academic because unfortunately hospitality needs two weeks to open and it's scheduled to open on May 17 anyway.'

He added: 'Everyday it costs hospitality alone £200 million when it's fully closed, and hospitality has approximately 3 million people on furlough, so we don't know if they will have jobs to go back to.

'I have been walking round the high streets of the UK over the last three, four weeks and in 30 years I have never, ever seen this level of devastation to shops, hairdressers, cafes, pubs, bars. It's worse than coming out of the 1990s recession - so many closed places that will not reopen when lockdown ends.' 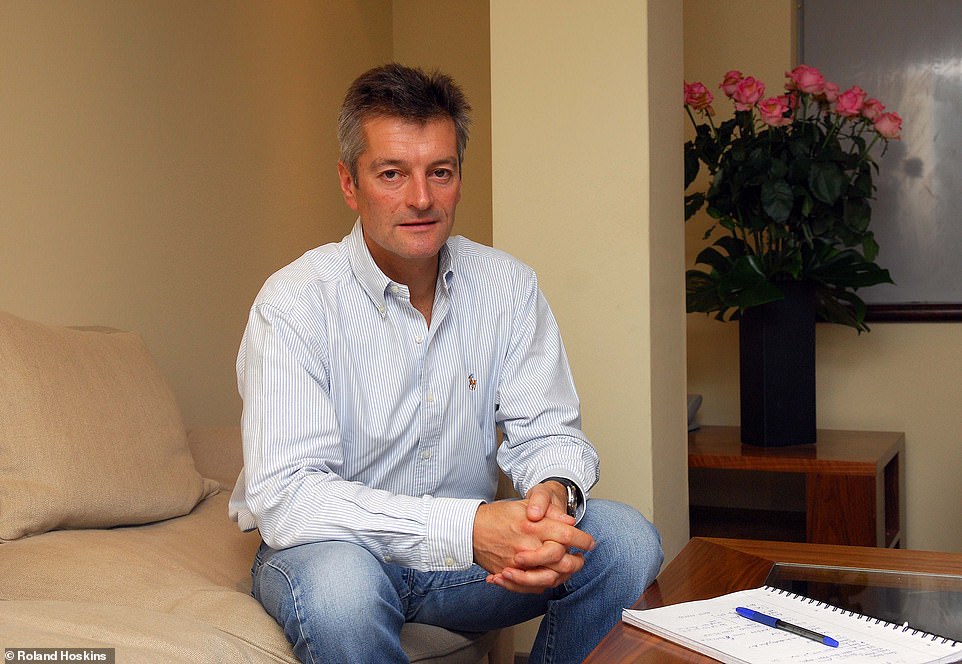 Hugh Osmond, chief of Punch Taverns and formerly Pizza Express, said that Boris Johnson's roadmap was costing his industry £200 million each day on the basis of projections which now lag weeks behind the actual figures which prove the scientists were wrong about vaccines, hospitalisations, cases and deaths due to Covid-19 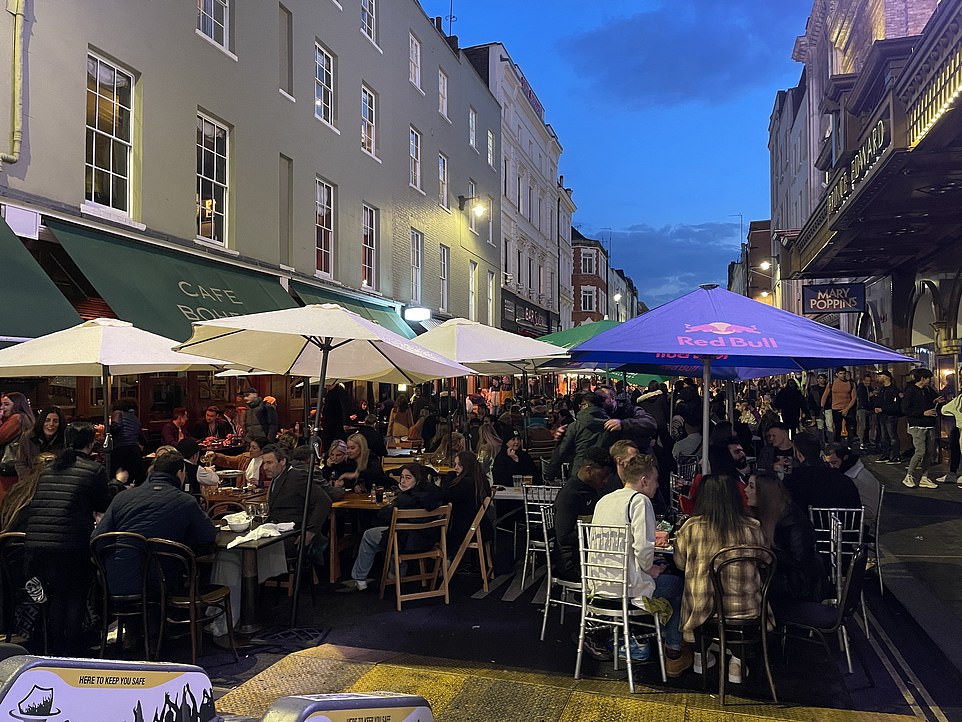 Britons will be allowed to hug their friends and family in just over a fortnight as ministers look set to follow through with the next stage of Boris Johnson's roadmap out of lockdown. Pictured: Revellers out in Soho, London, on Friday night 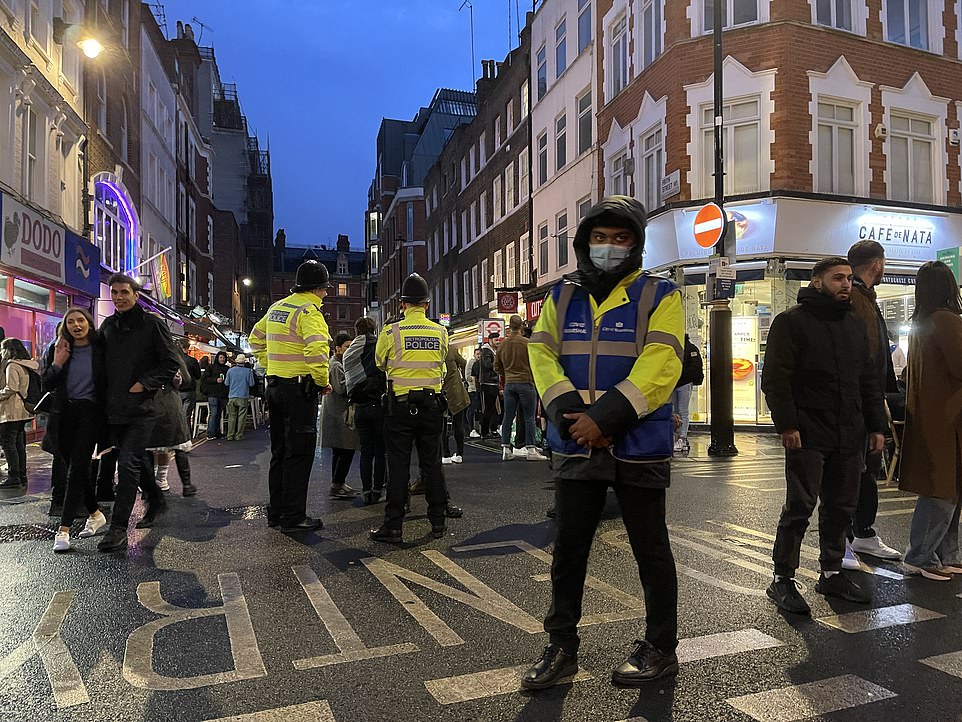 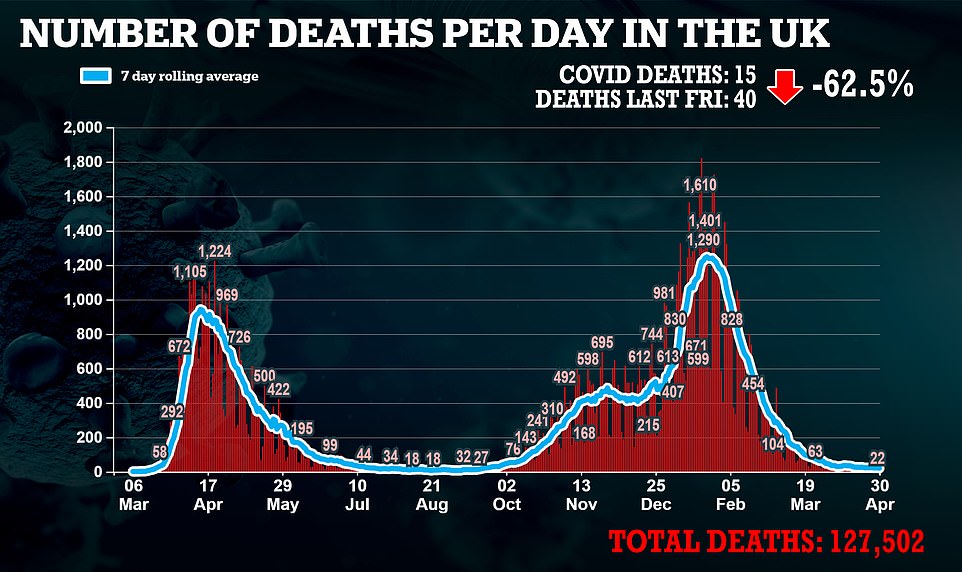 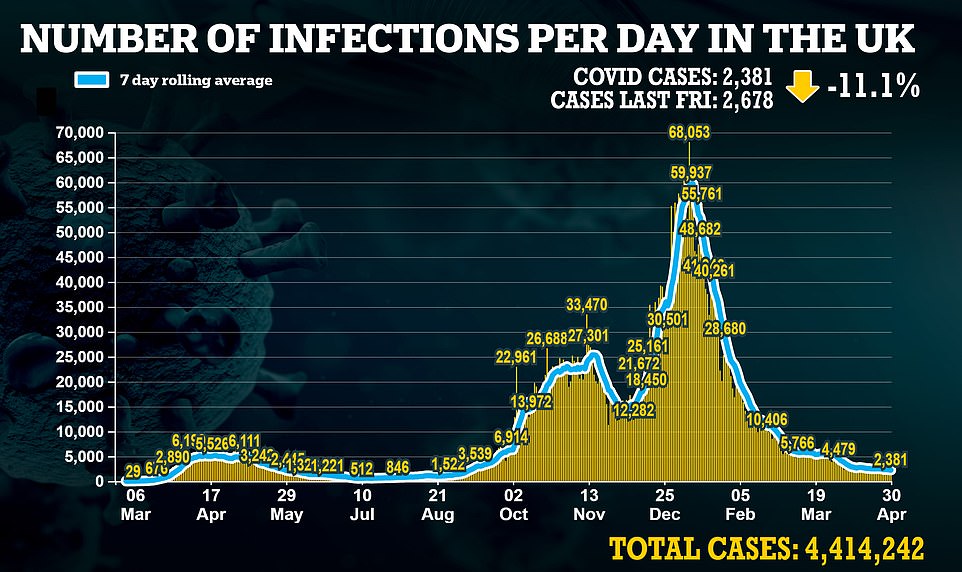 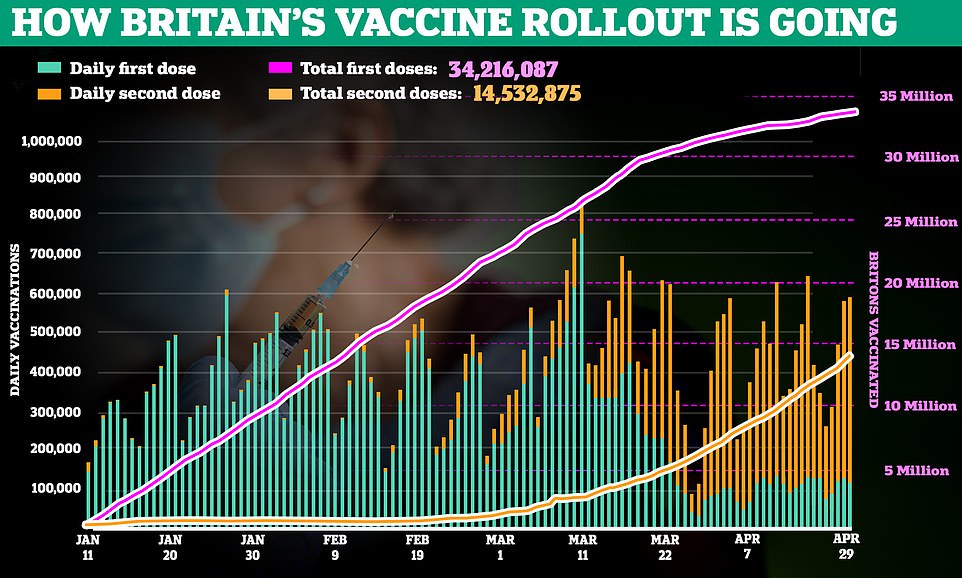 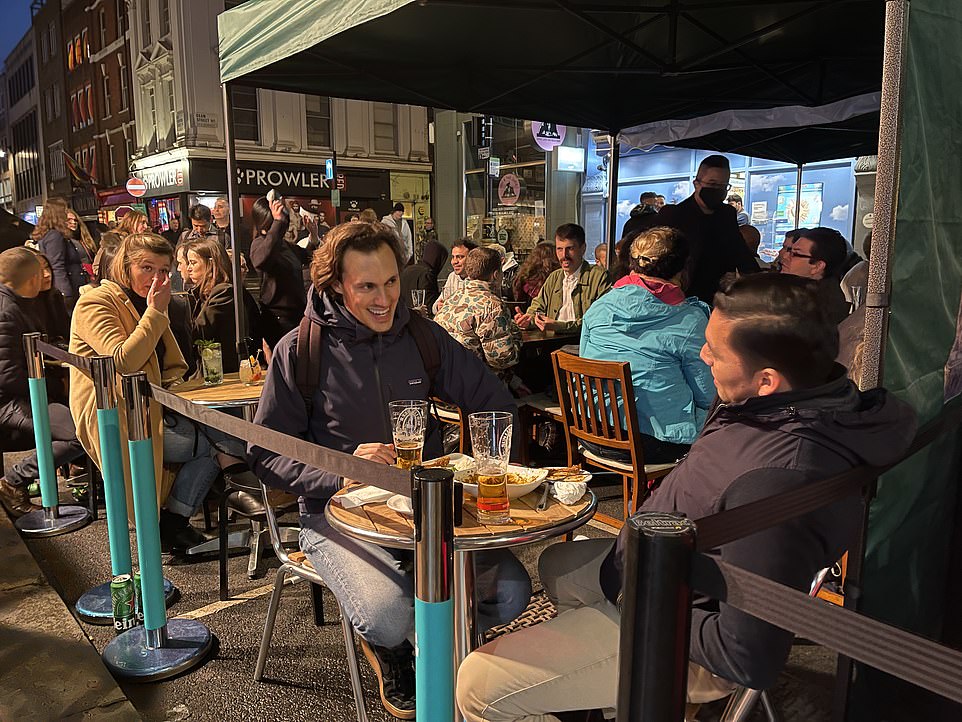 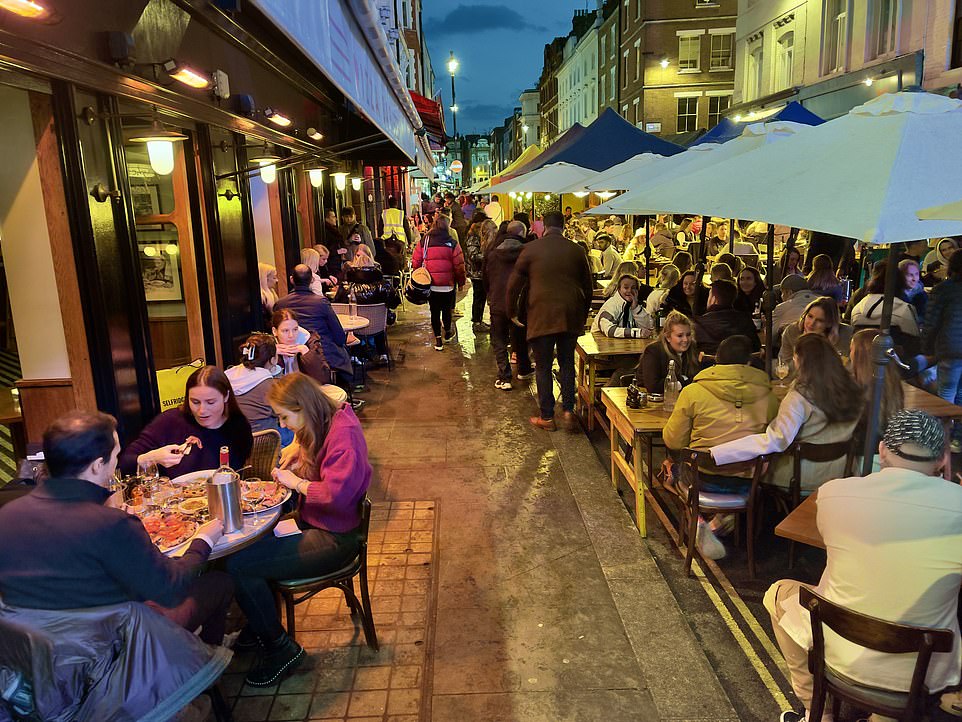 South Asian communities in England experienced greater levels of Covid-19 infection, severe disease and death during the second wave when compared to other minority ethnic groups, according to scientists.

Researchers said that while disparities for hospital admissions and death improved for most minority ethnic groups between the first (February to September 2020) and the second wave (September to December 2020) of the pandemic, it widened for those from South Asian backgrounds.

The findings, published in the journal Lancet, are based on 17 million adults in England and is thought to be the largest study to date.

Dr Rohini Mathur, of the London School of Hygiene and Tropical Medicine, UK, said: 'Despite the improvements seen in most minority ethnic groups in the second wave compared to the first, it's concerning to see that the disparity widened among South Asian groups.

The scientists said health factors - such as body weight, blood pressure and underlying health conditions - as well has household size could be some of the key factors for disparity in Covid-19 mortality for South Asian groups.

Based on their findings, the researchers are calling for more intensive strategies tailored to improve outcomes in South Asian communities in addition to reducing structural disadvantage and inequality and improving quality of and access to healthcare across all minority ethnic groups.

'In light of emerging evidence that minority ethnic groups are less likely to take up the Covid-19 vaccine, co-designing culturally competent and non-stigmatising engagement strategies with these communities is increasingly important.'

The Covid-19 pandemic is thought to have had a disproportionate impact on minority ethnic communities in the UK when compared with white groups - with living in deprived areas, working in front-line jobs, and having poorer access to healthcare putting them at higher risk of severe disease and mortality.

For their study, the researchers analysed partially anonymised electronic health data from 17,288,532 adults in the OpenSAFELY database.

Ethnicity was self-reported by participants and grouped into five main categories - white, South Asian, black, other, and mixed.

Data showed that during the first wave, nearly all minority ethnic groups had higher relative risk for testing positive, being admitted to hospital and intensive care units (ICU), and death, compared to white groups.

ICU admissions were more than doubled for all minority ethnic groups compared with white groups, the researchers said, with black people more than three times more likely to be admitted to ICU after accounting for other factors.

The researchers found these risks lessened during the second wave for all minority ethnic communities, with the exception of South Asian groups.

Mr Osmond launched a judicial review last month which claimed the government 'failed' to provide evidence for delaying the return to indoor drinking.

He says that, though the pubs are due to reopen indoors on May 17, he wants the government to lay out all the evidence it has used previously which 'destroys livelihoods' to ensure that it cannot be implemented again.

It comes as international travel looks set to also get the green light on May 17 as was pencilled into the roadmap out of lockdown unveiled earlier this year.

Ministers could also relax social distancing between friends and family on May 17 - meaning loved ones kept apart for months may finally be allowed to hug.

From that date, limits on outdoor meetings are set to be lifted while the rule of six - or two households rule - will apply indoors.

Government guidance states the advice 'on social distancing between friends and family' will be updated on May 17.

And a source told The Times: 'The data is looking very good. The scientists say we're on track for the next stage unless something changes dramatically.'

Department of Health bosses also posted another 2,381 cases, with the outbreak remaining stable.

Last Friday there were 2,678 infections and 40 deaths reported.

Another 610,000 vaccines were also dished out, with 14.5million Britons now fully vaccinated against coronavirus.

The Government today announced care home residents will be able to leave their home for 'low risk' visits without having to self-isolate for 14 days on their return.

From Tuesday, residents leaving their home for a walk or to visit a loved one's garden will no longer have to isolate for two weeks when they get back.

But those leaving for medical appointments and for overnight visits will still be required to self-isolate for 14 days.

The Department of Health and Social Care (DHSC) removed the requirement for outdoor, 'low risk' visits after being threatened with legal action by the charity John's Campaign.

Under the changes, residents on visits out must be accompanied by either a member of staff or one of their two nominated visitors, and follow social distancing throughout.

They cannot meet in groups or go indoors - except for the use of toilets - and public transport should be avoided where possible.

It is understood a resident would be able to eat outside at a restaurant or cafe with their care worker or nominated visitor if they agree this with the care home in advance.

Residents will also be able to vote in person in the upcoming local elections without having to self-isolate for 14 days.

The DHSC is expected to review the self-isolation requirement for more visits on May 17.

It comes as separate data showed England's Covid cases have plunged by 40 per cent in a week, with just one in every 1,010 people now carrying the virus.

Office for National Statistics data suggested the total number of infections is lower than at any point since early September and infections have been falling constantly for five weeks.

Its report showed that cases were still tumbling in all regions except Yorkshire and the East of England 'where the trends are uncertain'.

They also came down in all children and teenagers and people over 35, increasing only in young adults.

And SAGE yesterday estimated the R rate was between 0.8 and 1.1, meaning the outbreak is still flat.

It is up slightly on the 0.8 - 1.0 last week, and reflects the state of the outbreak a fortnight ago because the data takes time to filter through.

Health Secretary Matt Hancock tweeted about the numbers, saying: 'This data is hugely promising and shows that our strategy is working.'

Experts said the data 'should be celebrated' and were the first proof that, despite the reopening of outdoor hospitality and allowing the rule of six earlier this month, there was 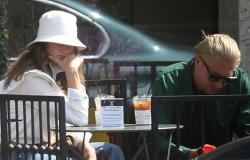 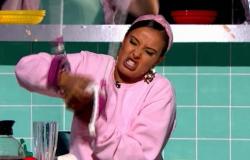 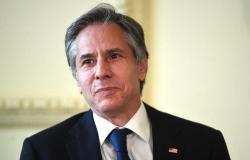 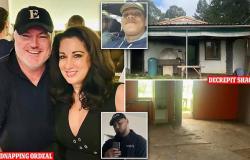 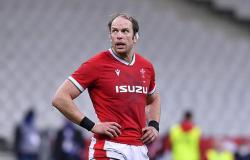