The NYPD cop killed in the line of duty by an apparent drunk driver who filmed herself saying 'f**k the police' and downing shots before embarking on a deadly hit-and-run has been posthumously promoted to detective at his funeral.

Hundreds of mourners gathered Tuesday morning to pay their respects to NYPD Highway Officer Anastasios Tsakos at St. Paraskevi Greek Orthodox Shrine Church in Greenlawn, New York, as his grieving widow gave an emotional tribute to the 'love of my life.'

Tsakos, a 43-year-old married father of two and 14-year veteran cop, died last Tuesday when Jessica Beauvais, 32, plowed into him in her Volkswagen on the Long Island Expressway.

The traffic cop was redirecting vehicles following a separate fatal car accident in Queens when Beauvais' car allegedly veered and struck him head on, hurtling him around 200 feet. He was rushed to hospital where he was pronounced dead.

Beauvais, who was allegedly intoxicated and driving with a suspended license at the time, allegedly sped away from the scene with a 'completely shattered' windshield before being stopped by police.

Police said she was almost double the legal alcohol limit at the time and later confessed to drinking wine, vodka and smoking weed before getting behind the wheel of her car.

Later that day, she was led out of the NYPD's 107th Precinct in handcuffs sobbing that she was 'sorry that I hit him and that he's dead.'

Hours before the fatal encounter, Beauvais posted a rambling video of herself on Facebook Live where she said police officers are 'signing up for potential death' as part of the job and boasted about carrying a knife while drinking unknown liquids throughout the footage. 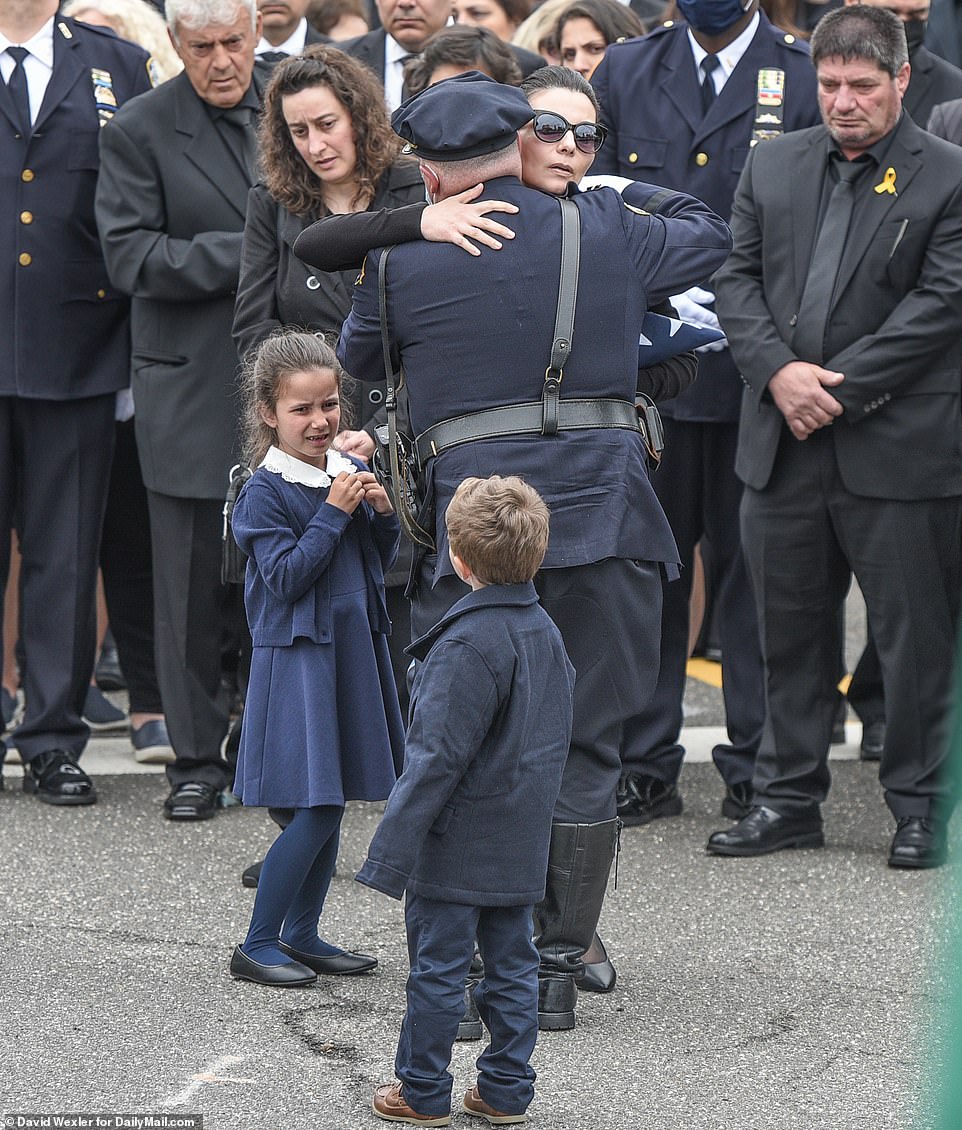 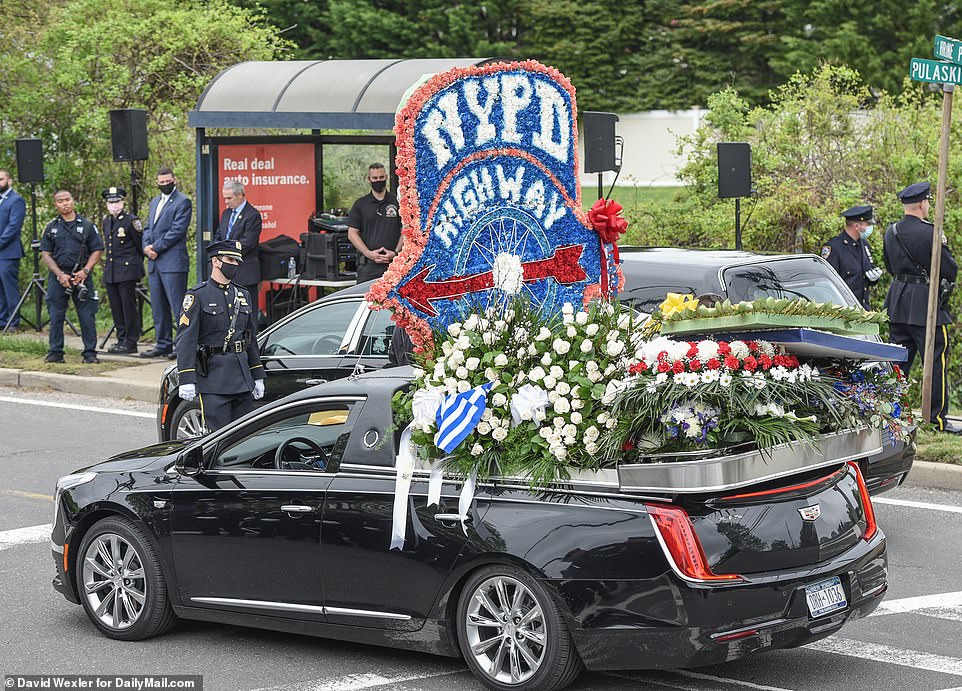 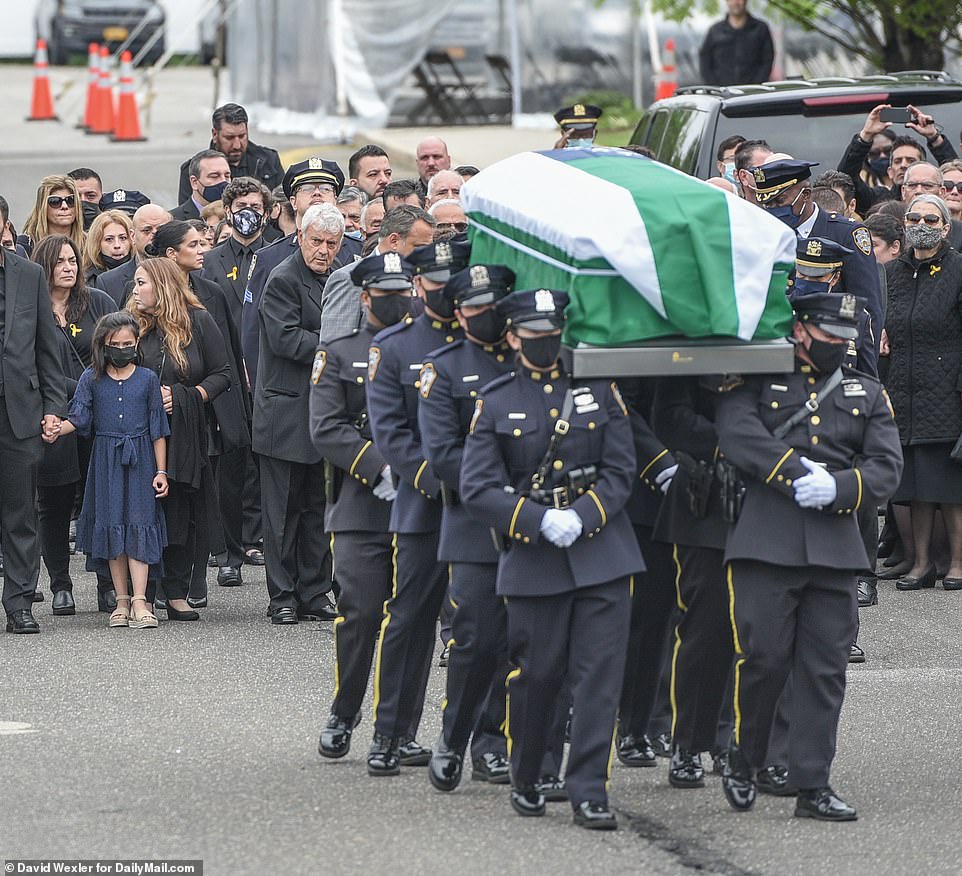 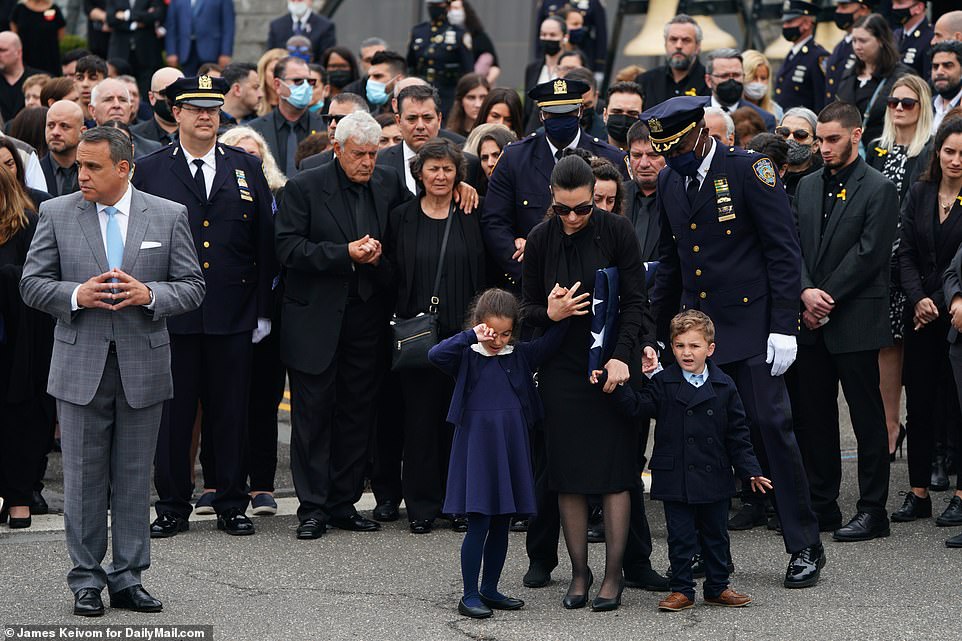 The officer's wife and two children gathered for the service. His grieving widow gave an emotional tribute to the 'love of my life'

New York City Bill de Blasio and NYPD Commissioner Dermot Shea spoke at Tuesday's nearly two-hour service which was limited to 180 attendees due to the pandemic.

Dozens more gathered outside the church with the streets around the area a sea of blue as fellow police officers and community members paid their respects to the fallen officer.

Tsakos lay in an open casket in the church flanked by large portraits and floral wreaths including one depicting the Greek and American flags in honor of the Greek native who moved to the US and became a law enforcement officer.

His work and personal motorcycles were also taken to the service for the keen motorcyclist.

During the service, Shea announced he was posthumously promoting Tsakos to detective first grade and presented a gold detective shield to his wife Irene.

Shea praised the officer who had made almost 200 arrests during his career and would chase down drunk drivers in the pursuit of justice.

'He was the one you were grateful to arrive at the scene, the one you could always rely on,' Shea said. 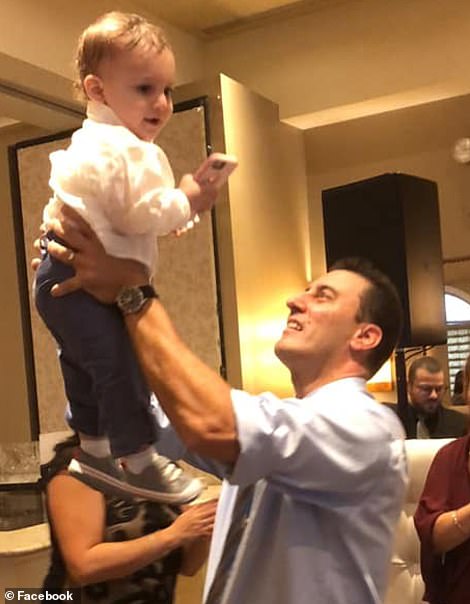 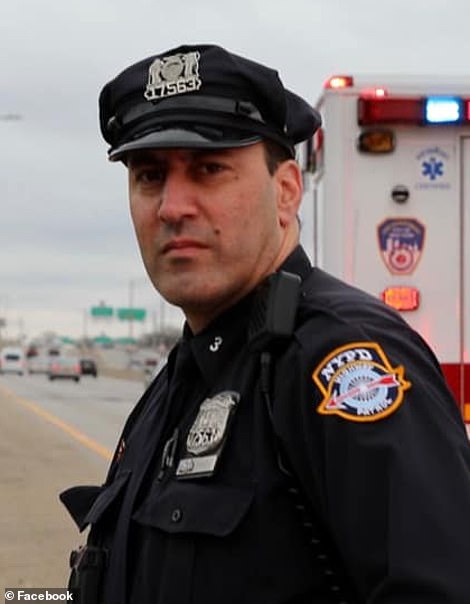 Tsakos, a 43-year-old married father of two and 14-year veteran cop, died last Tuesday when Jessica Beauvais, 32, plowed into him in her Volkswagen on the Long Island Expressway 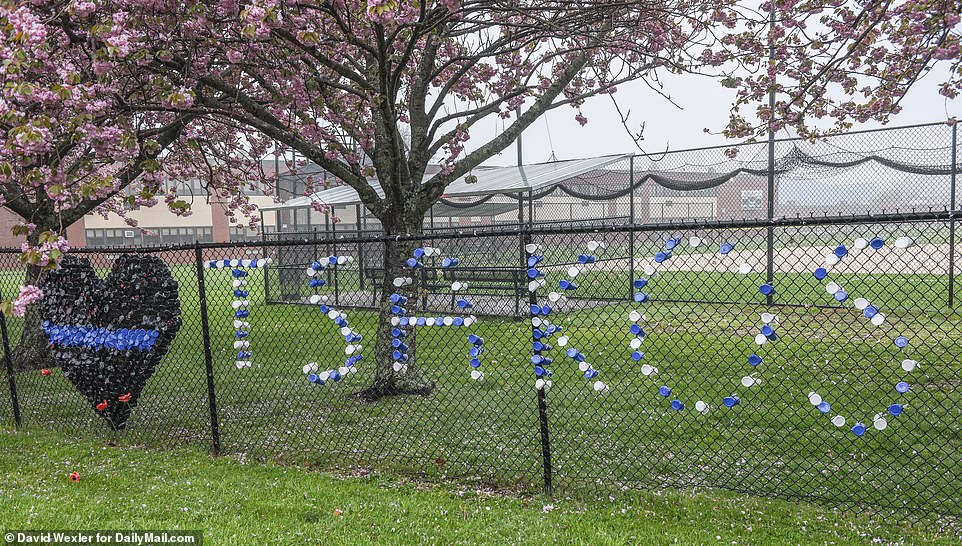 The officer's name is spelled out in paper cups along the fence at the High School in Greenlawn, New York 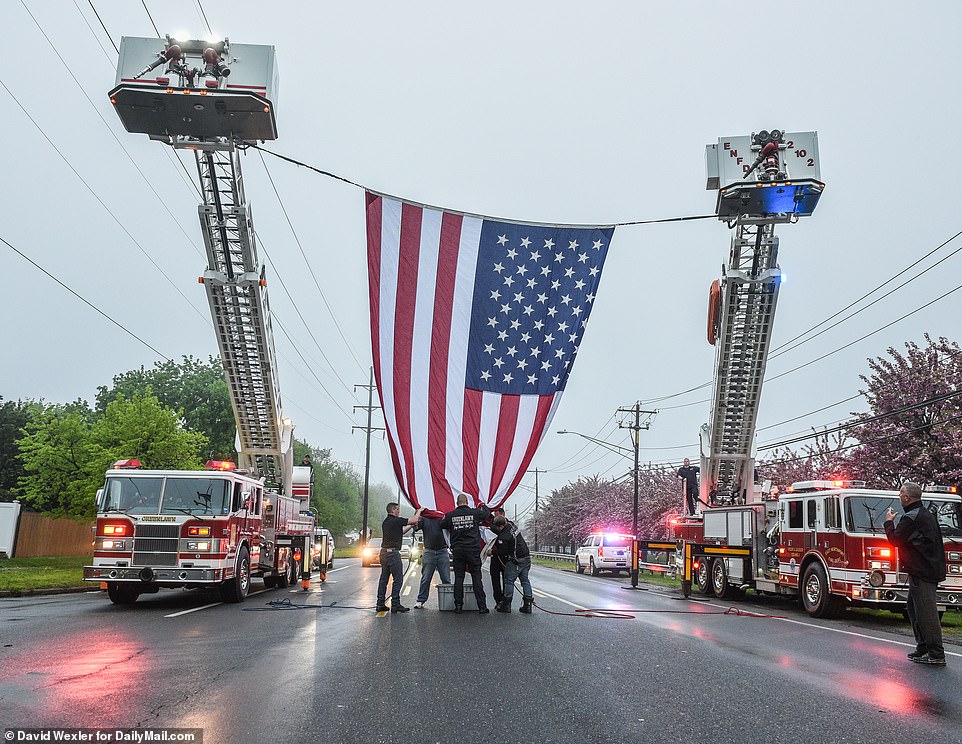 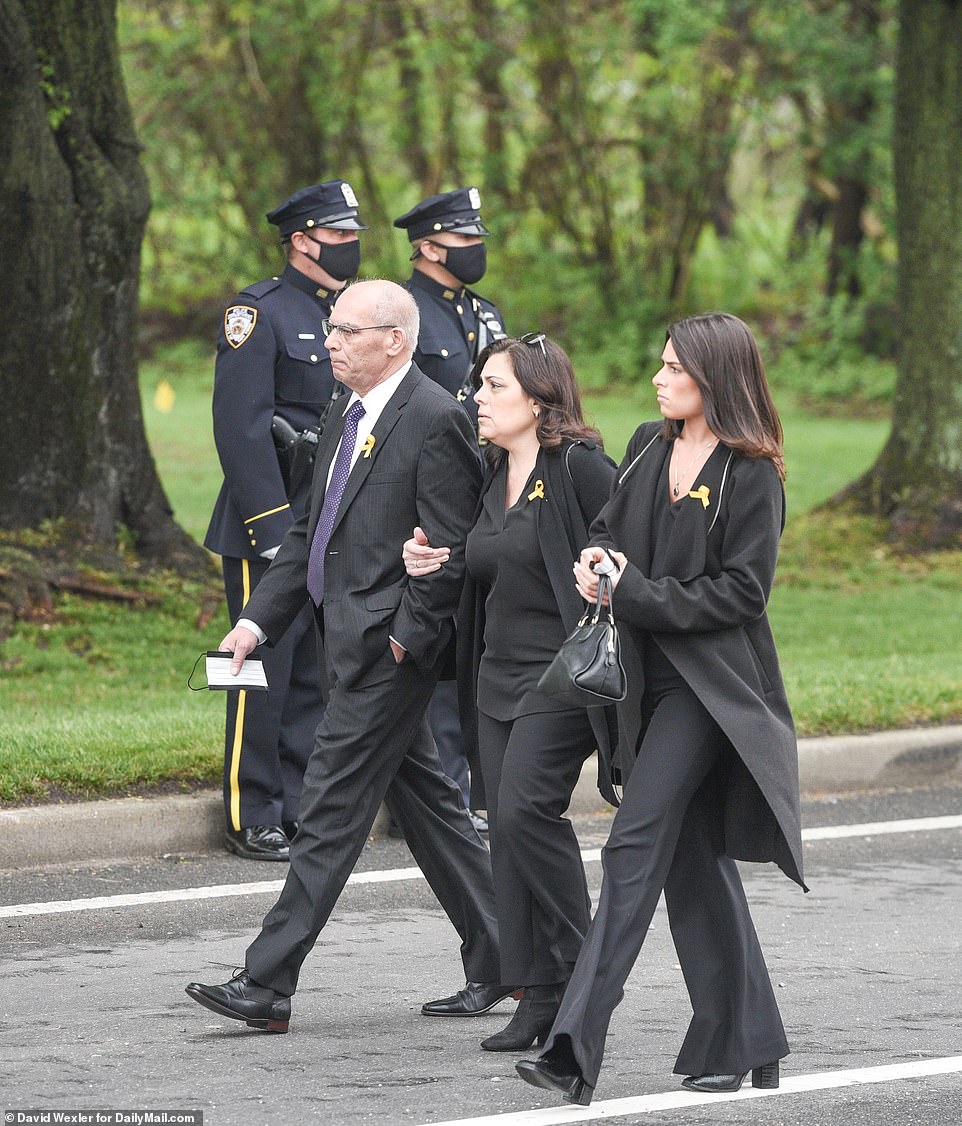 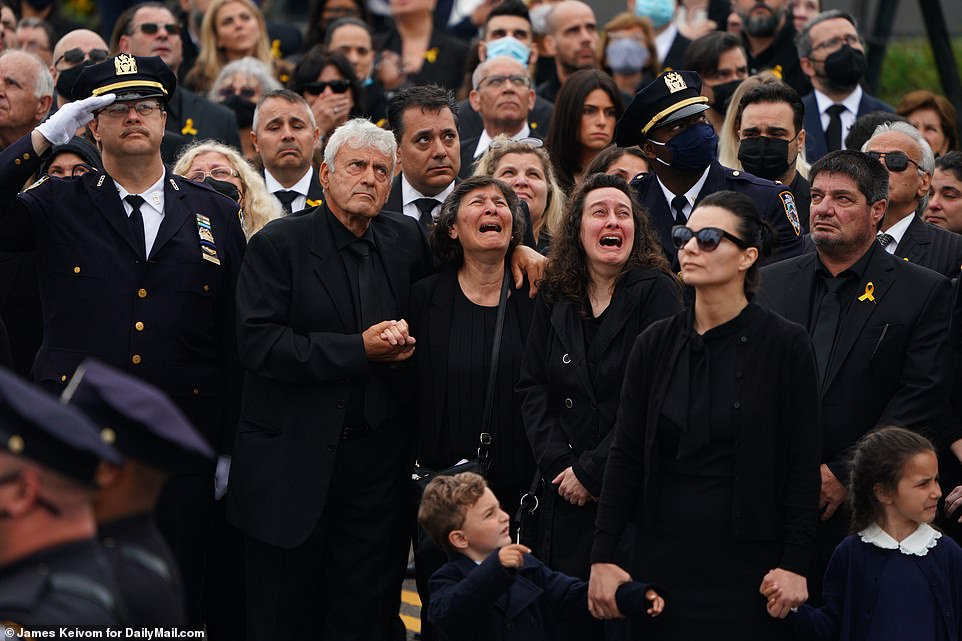 'He was the one who always asked 'what else could I do?… He always hated that anyone would get away with anything on his shift, when it was his responsibility.'

The NYPD boss described Tsakos as 'the perfect depiction of the American dream' after he moved from Greece for a new life in the US.

'He absolutely was a great cop. Taso was, from beginning to end, a very intelligent and hardworking man,' he said.

'He was the envy of his peers. He was really a perfect picture of the American dream. An example of our nation´s great diversity.

'Also, an example of the extraordinary call to service that so many courageous New Yorkers embrace.'

Tsakos grew up in Greece and New York City, before serving in the Greek army after high school. 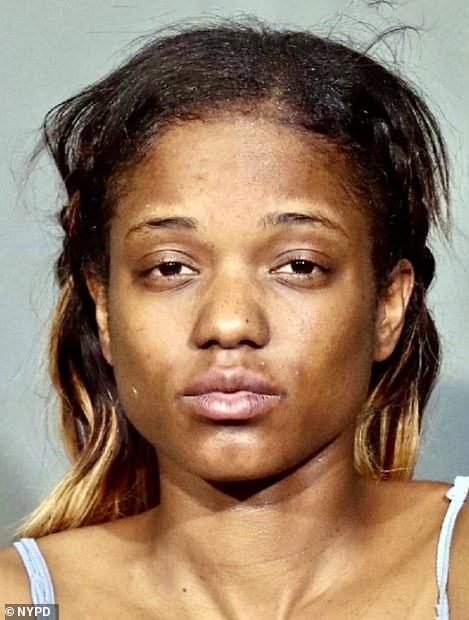 He then went on to work in his father's diner on Long Island, before studying aviation in college to follow his dreams of flying helicopters for the NYPD, Shea said. The officer and his family had just moved to East Northport last year.

De Blasio spoke of Tsakos' 'heroism' and hit out at his tragic loss of life.

'It does not make sense how someone could live his life right in every way and be taken from us so horribly,' he told mourners.

Tsakos' widow Irene also gave an emotional speech to mourners inside the church where she told how he was an adoring father to their 6-year-old daughter and 3-year-old son.

She recalled how he would help their children build houses out of cardboard boxes and let their daughter play hairdresser with his hair.

He had dreams of winning the lottery so he could buy a small plane and they could travel the world as a family, she said.

'I will miss everything about him. Everything. Most of all, I will miss his hugs,' said Irene.

'I wish he had more time - to watch our kids grow, see them off to college and get married. I wish we could grow old together. That was the plan. But he was taken from us too soon.'

She described him as the 'love of my life' and told him 'I hope I made you proud'.

Irene was supported by her husband's parents and other family members who flew in from Greece to say goodbye to the 43-year-old. 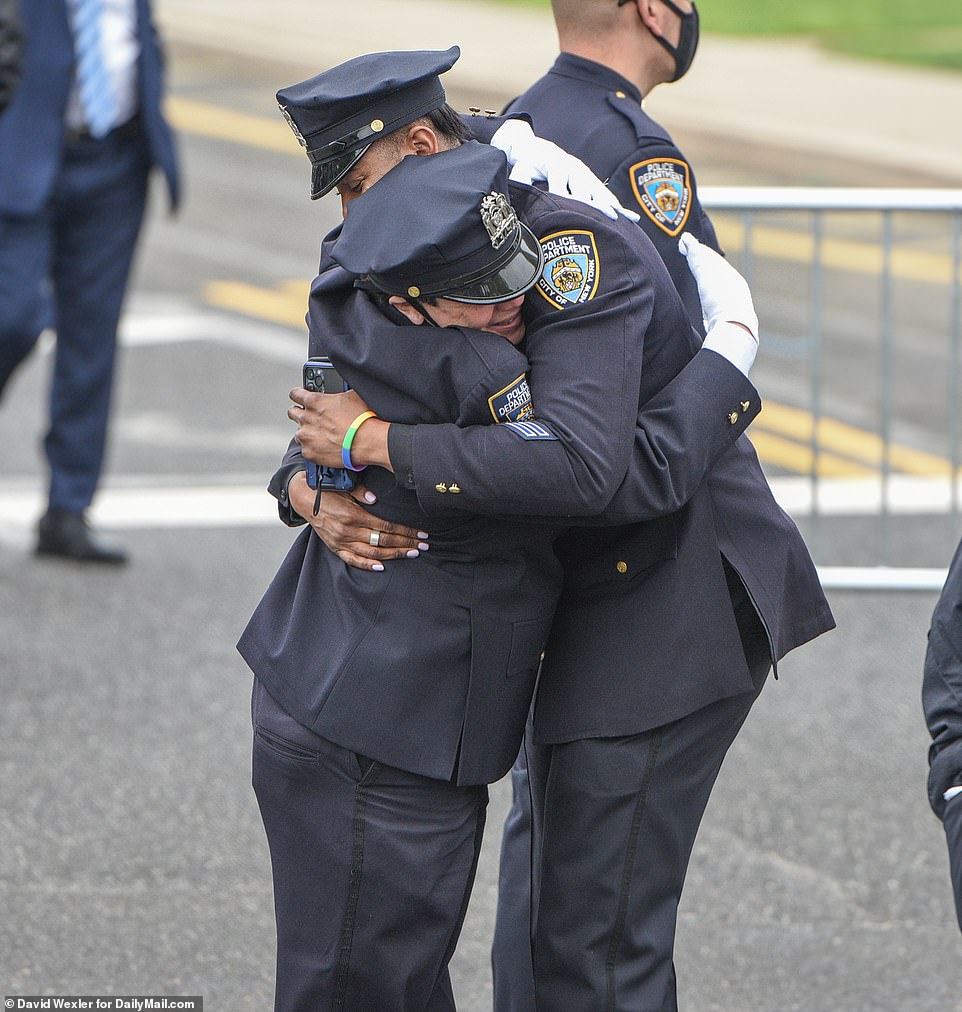 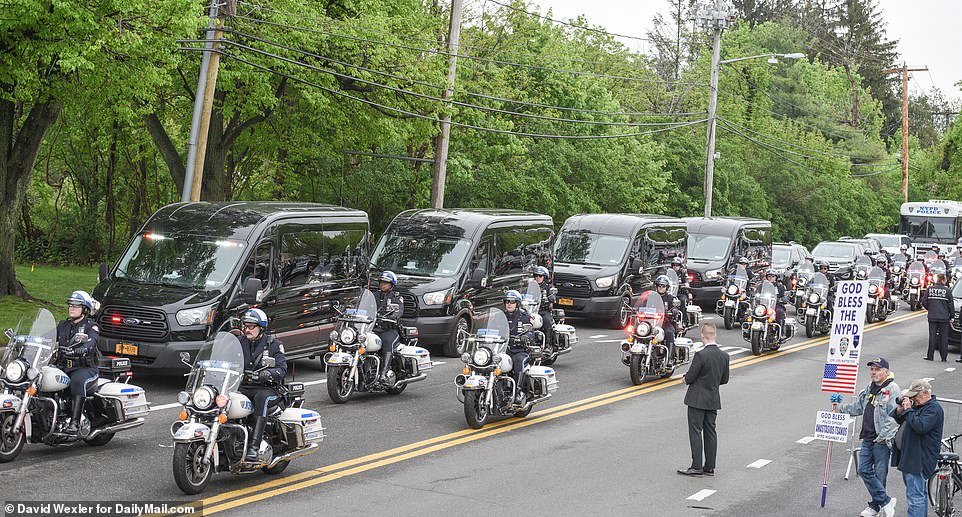 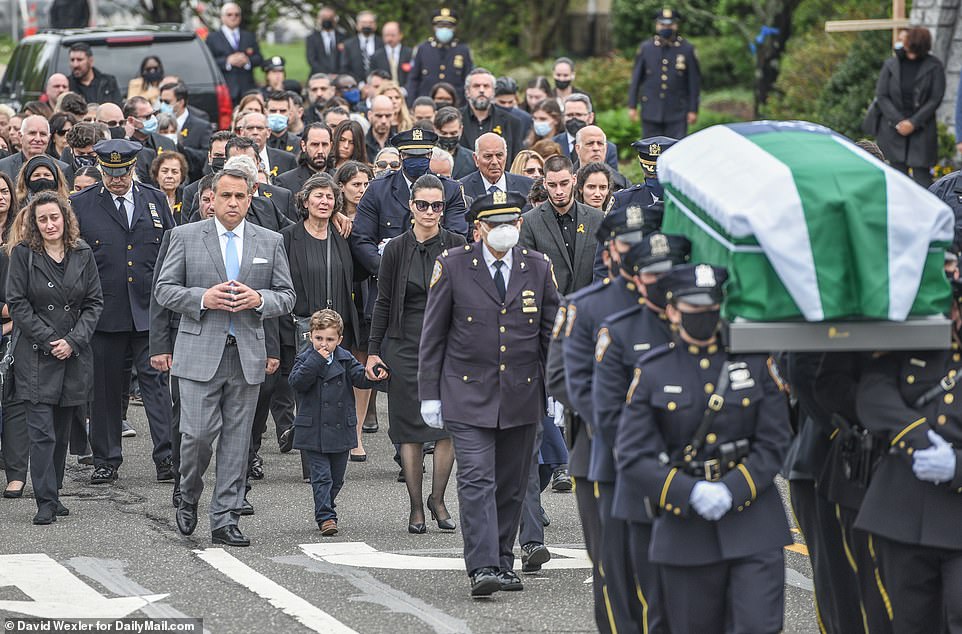 This marked the second day of memorial services for Tsakos after thousands attended a viewing Monday as the fallen officer's body was brought to the church.

Fellow NYPD officers lined the entrance and saluted as he was brought into the church.

The Stephen Siller Tunnel To Towers Foundation, which was set up in the wake of September 11 to provide support to families of fallen first responders, has said it will pay for the remainder of the mortgage on the family's home.

According to the criminal complaint, Beauvais was speeding along the Long Island

PREV Britain drops demand for 5m jabs from India where Covid cases have soared past ...
NEXT Convoy of carnage: MAX HASTINGS writes about one of the most dramatic forgotten ... 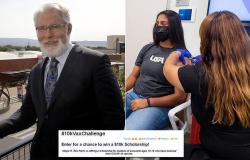 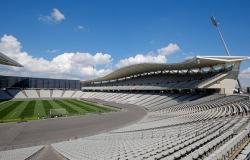 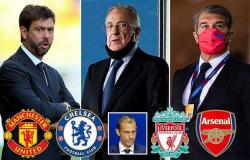 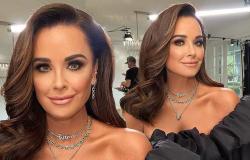