Ten adorable ducklings had to make a five-foot leap of faith to the ground after being born in a hanging basket, where their mother had made a nest.

Staff at van conversion company Fleetshields in Colchester, Essex, had a pleasant surprise after watching ten ducklings hatch in a wall-mounted flower basket.

A mallard duck made a nest in the hanging basket over the Easter weekend and laid ten eggs over the following days, which finally hatched on May 10 after 25 days of incubation.

Just two days after hatching, the staff watched with delight as the chicks decided it was time to leave the nest - and bravely leapt the long five-foot to the ground below.

Sweet video footage showed the mother easily jumping to the floor from the basket before waiting for her nervous ducklings to make the leap of faith and join her. 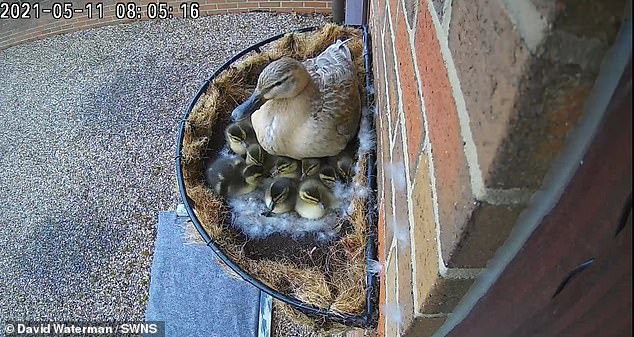 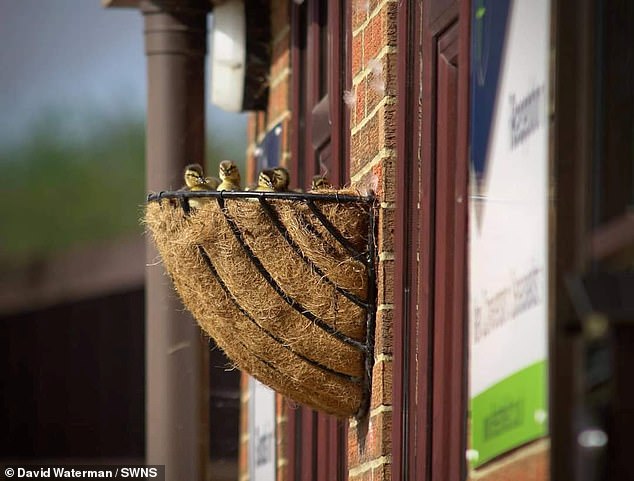 A mallard duck made a nest in a hanging basket over Easter weekend and laid ten eggs, which finally hatched (ducklings pictured) on May 10 after the mother incubated them for 25 days

The Fleetshields team had even set up a 'crash mat' on the ground for the newly-hatched chicks, stuffed with hay, so they could have a soft landing.

In the clip, the fluffy ducklings left the nest and dropped out of the hanging basket one at a time to join their mother, who was patiently waiting below.

Meanwhile, eager Fleetshields staff could be seen taking a break from work to watch the incredible scene intently from behind a nearby wall.

Operations director David Waterman, 49, said the team had set up wildlife cameras outside so they could keep an eye on the mother duck while she incubated the eggs.

He continued: 'It was fantastic to watch. It was about 30 minutes of absolute joy as they all leapt from the nest.

'We'd set up wildlife cameras outside to keep an eye on the mother duck as she incubated her eggs - so we all feel a bit like we've become wildlife experts over the past few weeks.

'It's been a magical five weeks, getting to see the process from the beginning.' 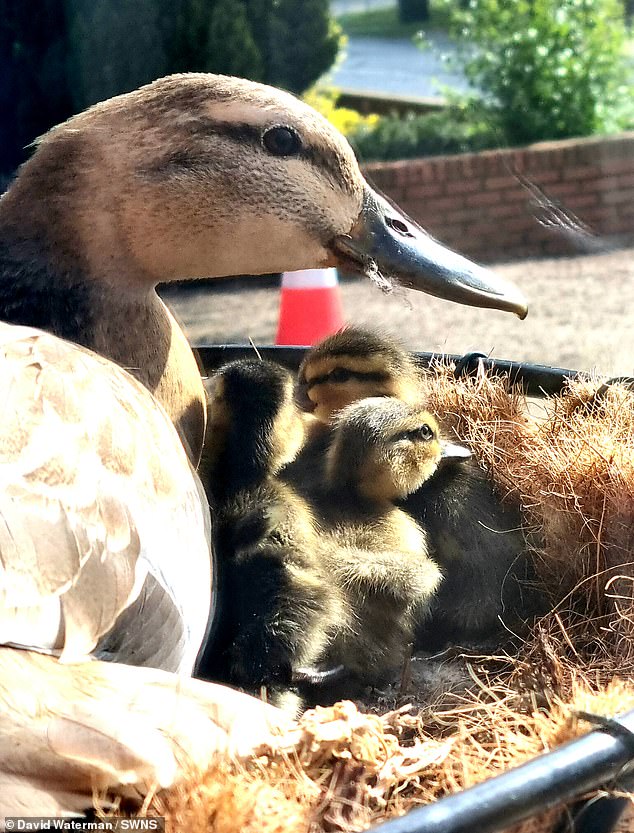 Despite the height of the hanging basket, operations director David Waterman said