Martin Roberts is a presenter who is best known for being one of the hosts on the BBC property auction series, Homes Under the Hammer. He also made a name for himself appearing on shows including Celebrity Masterchef and I’m A Celebrity… Get Me Out of Here!. As well as a television career, Martin has racked up a fortune working as a property developer. How much money does he have in the bank?

Sarah Willingham net worth: How Dragon’s Den star made her millions 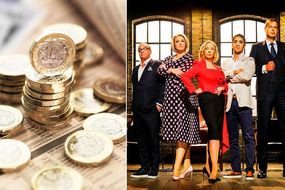 Dragons' Den net worth: Who is the richest dragon of all time?

Martin Roberts net worth: Homes Under the Hammer property expert has made this fortune

The TV star has a fortune of £1.2 million, according to Spear’s magazine.

After working for his university radio station, he landed a job on air at BBC Radio Manchester.

When he wasn’t on the radio, Martin explored his interest in property and began working as a property developer in the early 1990s.

Martin Roberts net worth: The Homes Under the Hammer star has worked on the show for 16 years (Image: GETTY)

Martin has used his expertise to contribute to many different publications on the subjects of property development and travel.