EastEnders viewers are set to say goodbye to one Walford resident next week after a dramatic showdown in the Queen Vic results in a mystery victim being shot.

The pictures show Ben Mitchell (Max Bowden) and Jay Brown (Jamie Borthwick) standing by a hearse preparing for a funeral.

In other scenes, Lola Pearce (Danielle Harold) can be seen arguing with Jay before comforting him on the BBC soap. 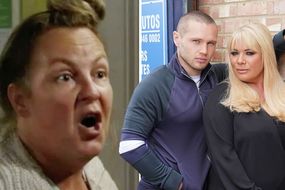 The trio are joined by Lola’s grandfather, Billy Mitchell (Perry Fenwick) yet it is unclear who has met their maker.

Will a member of the Mitchell family be killed off?

In several of the pictures, the Mitchell men can be see wearing poppies so it is likely these scenes will air in November.

The sad occasion seemingly doesn’t go to plan and aside from Jay and Lola’s bust up, the group are faced with a flat tyre.

Meanwhile, with Hunter out for revenge in EastEnders next week, this will be the second death to rock Walford in only a matter of months.

Hunter is on the run after escaping from prison and seeking help from his mum Mel Owen (Tamzin Outhwaite).

EastEnders spoilers: Will Sharon, Lola or Keanu be left heartbroken by shock death?