BEATLES had a huge amount of attention from the ladies when Beatlemania struck - but who were their girlfriends before they got famous?

The Beatles each had a great deal of female attention when they made it big. Beatlemania was a global phenomenon which likely took them by surprise, though many of the girls would be disappointed to know how most of them had girlfriends in the early days. So who were these women, and what was it like to be the one dating a Beatle?

Cynthia Lennon, then known as Cynthia Powell, first met John Lennon as a student at the Liverpool College of Art in 1957.

The pair were in the same calligraphy class, but Cynthia was taken by another man at the time, who was her fiancé.

Despite this, Cynthia fell for John and dumped her fiancé to be with him, but things weren’t plain sailing and they had struggles in the first few years of their relationship.

John said in The Beatles: The Authorised Biography: “I was in sort of a blind rage for two years. I was either drunk or fighting.

Inside Beatles' relationships before they were famous (Image: Getty) 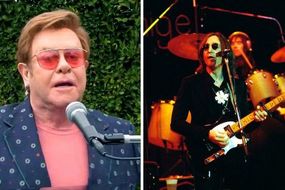 John Lennon Elton John: Did they ever collaborate? Story behind songs

“It had been the same with other girlfriends I'd had. There was something the matter with me."

Despite these difficulties, Cynthia and John got married, after she became pregnant with their son, Julian Lennon.

Speaking about how Cynthia felt about their marriage when Beatlemania hit in her 2006 book, John, she said: “I was usually dismissed as the impressionable young girl who fell for him, then trapped him into marriage.”

Cynthia also claimed she was told to pretend she was someone else to keep her marriage to John secret in their early days, telling NPR: “I was asked many times if I was John’s wife, and I had to refuse and say, 'No, no, I’m somebody else.’"

Julian was born on April 8, 1963, but John said unsavoury things about him in his 1980 interview with Playboy.

He said: “I'm not going to lie to Julian. Ninety percent of the people on this planet, especially in the West, were born out of a bottle of whiskey on a Saturday night, and there was no intent to have children…