MIRANDA season 4 hasn't been confirmed but with the BBC repeating episodes of the classic sitcom, many fans have been wondering whether there will be another series of the comedy.

Comedy series Miranda is being repeated on BBC One this evening (Friday, August 14) at 7.30pm. The long-running series may have ended in 2015 with the character getting the happy ending she’d longed for. But could fans of the show see more of Miranda in the future?

{%=o.title%}
Will there be another series of Miranda?

Season three was the last full series to air and was broadcast between 2012 and 2013.

This was followed by a series of specials which saw the cliff-hanger at the end of season three resolved.

Miranda concluded back in 2015 with a series of festive specials in which the title character (played by Miranda Hart) wed her long-term love interest Gary Preston (Tom Ellis).

Hart has not completely ruled out the idea of her accident-prone creation making a screen comeback.

Miranda: The cast of the hit BBC sitcom (Image: BBC) 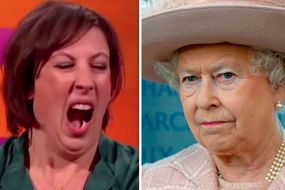 Queen savaged Miranda Hart after 'yawning like a dog' at comic

But from the looks of it, Miranda fans might be waiting some time for a full series.

Instead, another one-off specials look more likely with the star’s 70-minute programme Miranda: My Such Fun Celebration, which was recorded at the London Palladium, airing on New Year’s Day.

Miranda: My Such Fun Celebration was shot to mark the 10-year anniversary of the show but wasn’t a new episode.

Comic Hart has previously spoken about the future of the show and her character, suggesting she is open to make a return at some point.

She told the Radio Times in 2015: "I can’t say with confidence [Miranda won’t return] because it feels too sad. I think she’ll always be the best part I’ll play,"

Writer Anand Giridharadas on tech's billionaires: "Are they even on the same team as us?"