MEGHAN MARKLE and Prince Harry have been attacked by critics on social media who claim the couple's deal with streaming giant Netflix undermines their calls for a more private life.

The couple announced their intention to “step back” from their royal roles earlier this year and have since spoken out against perceived press intrusion. On Wednesday it was announced the Duke and Duchess had agreed a multi-year deal with Netflix to make documentaries, films and children’s shows.

Meghan Markle joy: How Meghan will be celebrating special event 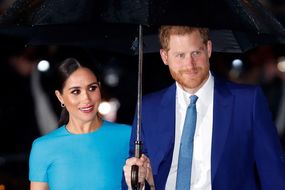 Whilst Meghan has previously ruled out a return to acting, there is speculation they could end up appearing on the screen in some capacity.

Whilst the value of the deal has not been published many have compared it to a similar agreement Netflix reached with Barack and Michelle Obama to produce programmes.

However, a number of social media users criticised the move which they claimed will thrust the couple back into the public spotlight.

Meghan and Harry have been mocked by critics on social media (Image: GETTY)

After discussions with senior royals the couple agreed to repay the taxpayer money spent renovating Frogmore Cottage, their former home near Windsor, and to stop using their ‘Sussex Royal’ brand.

Recently they moved to a new £11.2m home they brought in a town to the north of LA.

Reacting to the deal with Netflix the couple said: “Our lives, both independent of each other and as a couple, have allowed us to understand the power of the human spirit, of courage, resilience and the need for