PRINCE CHARLES is expected to be Britain's next king but may still choose to abdicate in favour of William, according to a body of constitutional experts.

Prince Charles, 71, is first in line to the throne and is the oldest heir apparent in British history. While the Prince of Wales is due to take over from his mother Queen Elizabeth II, 94, when she can no longer serve, his age has prompted speculation he could choose to hand the crown to straight to Prince William instead.

A body of constitutional experts has claimed that while the notion of abdication is "unthinkable" for the Queen it could one be an attractive option for Charles.

The Royal Family's tentative relationship with abdication is said to be the key reason the Queen would never step down.

The Queen's uncle Edward VIII triggered a constitutional crisis in 1936 when he abdicated from his role as king in order to marry American divorcee Wallis Simpson.

The painful event is considered to be a blot on the Windsor Family's history and is one the Queen remains keenly aware of to this day.

READ MORE: Prince Louis may miss out as George & Charlotte prepare for change

King Charles: Prince Charles is first in line to the throne (Image: GETTY) 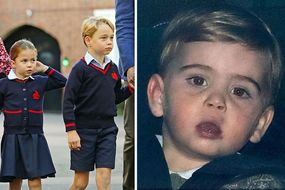 Prince Louis may miss out as George & Charlotte prepare for change

To this end, the Queen is expected to keep her role of sovereign until death when it will pass to Charles.

Constitutional experts at University College London's Constitution Unit have explained why the Queen is unlikely to abdicate and the process by which Charles might.

In answer to the question "Might Prince Charles abdicate in favour of William?"

The UCL constitution unit website states: "That would be a matter for Prince Charles, and for Parliament."

King Charles: The Queen's son could choose to abdicate in favour of Prince William (Image: GETTY)

The explanation continues: "For the Queen, abdication is said to be unthinkable, for two reasons.

"The first is the bad example of Edward VIII: his abdication brought the Queen's father onto the throne, unexpectedly and most reluctantly.

"The second is her declaration on her twenty-first birthday that she would serve for her whole life whether it be long or short.

"She is also said to regard her oath at her coronation as imposing a sacred duty to reign as long as she shall live."