GILLIAN ANDERSON is currently appearing in The Fall which came to Netflix recently. However, some fans of the series are curious about the actress' love life and whether The X-Files stars Gillian Anderson and David Duchovny dated in real life?

Netflix dropped all three seasons of BBC crime drama The Fall with many viewers coming to the show for the first time. The Fall concentrates on the efforts of brilliant Metropolitan Police Detective Stella Gibson (played by Gillian Anderson) as she tries to catch serial killer Paul Spector (Jamie Dornan), who has been murdering women under the moniker of the Belfast Strangler. However, viewers are curious to know more about Gillian and her life away from the cameras.

British-American actress Gillian first shot to fame in the 1993 sci-fi series The X-Files playing the iconic FBI Special Agent Dana Scully, a character modelled on Jodie Foster’s portrayal of Clarice Starling in The Silence of the Lambs.

Scully was a scientist and a doctor as well as a sceptic, who had been hired by FBI bosses to debunk the work of another FBI agent and The X-Files – the name given to cases which fell into the realms of the paranormal and unexplained, verging on conspiracy theories.

The pair provided a nice foil for one another with Scully as the non-believer and Mulder open to the possibility of other things not explained by conventional science. 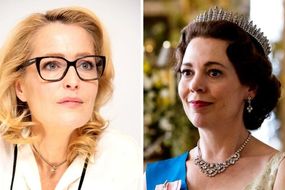 The X-Files also played with an unresolved sexual tension between the two FBI agents with fans tuning in for the will they/won’t they storyline as much as the compelling cases themselves.

Many fans also wondered if Gillian and David were also dating in real life with some hoping life would imitate art.

In a 2016 interview with The Telegraph, Anderson addressed whether she and co-star David had ever been together, telling the publication she had “never been romantically involved with Duchovny.”