THE LAST KINGDOM season 5 has been given the green light and fans are excited to hear what progress has been made on filming. Where is The Last Kingdom being filmed? Has filming started?

The Last Kingdom season five will be arriving in the near future and fans of the Anglo Saxon series are keen to find out the latest on filming. The series is based on The Saxon Stories by Bernard Cornwell and it is recognised for its huge battle scenes and periodic sets. Express.co.uk has everything you need to know about where The Last Kingdom is being filmed.

{%=o.title%}
Where is The Last Kingdom being filmed?

Filming for The Last Kingdom has taken place in Hungary since the series began in 2015.

Although the series is set in Anglo-Saxon England, many of the old English towns and villages are actually based near Budapest.

Filming for season five is also likely to take place in Budapest, with the iconic sets already picked out as filming locations.

The set for Winchester is built near Göböljárás, a village near Budapest. Similarly, Wessex is located in Dobogókő - a popular tourist spot. 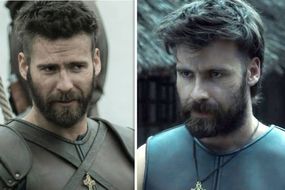 Nigel Marchant, executive producer, had explained how filming had taken place in Hungary as it was difficult to judge what England during that time period would look like.

He said the sets in Hungary created a sense of 'otherness', and the locations definitely have a feeling of history behind them.

Filming for the series usually takes place in the summer, and the cast revealed how much they enjoyed taking in the scenery of the beautiful Budapest during the summer months.

Cavan Clerkin, who plays Father Pyrlig in the series, said: "The best part of the show for me is working with such a fantastic bunch of people. We shoot abroad in Budapest and we’ve become very close, we all love the job so much."

Last Kingdom season 5: Timothy Innes and Alexander Dreymon will be back for season 5 (Image: Netflix)

Has filming started on The Last Kingdom season 5?

News of the season five renewal came to light at the beginning of July, in 2020, and fans of the series were delighted to hear they will be seeing more of Uhtred of Bebbanburg (Alexander Dreymon).