THE FALL has been captivating a new wave of audiences since arriving on Netflix UK a couple of months ago. One questions viewers of the British-Irish crime drama series have is about the fate of police chief Jim Burns.

BBC series The Fall has been given a new lease of life after it arrived on Netflix UK recently. The show might have finished airing back in 2016 but since it landed in its entirety on the streaming service, many people have been watching the show for the first time. While season three wrapped up the horrific tale of the Belfast Strangler (played by Jamie Dornan), there were still question marks over some of the other characters.

{%=o.title%}
The Fall season 3 explained: What happened to Jim Burns?

WARNING: This article contains spoilers from all seasons of The Fall

Season three ended with Assistant Chief Constable Jim Burns (John Lynch) stepping down from his position from the Police Service of Northern Ireland.

Burns was the one who drafted in Metropolitan Police Detective Stella Gibson (Gillian Anderson) to catch Paul Spector.

His career hinged on the success of the taskforce he’d set up and ultimately Gibson managed to catch the killer.

However, Burns clearly had many personal demons he was trying to come to terms with, which ultimately led to his resignation. 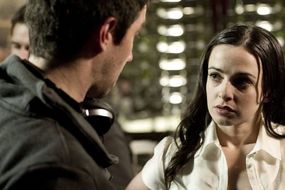 The Fall cast: Who is Laura Donnelly? Meet the Sarah Kay star

During the drama, viewers found out Burns had had an affair with Gibson which almost resulted in the end of his marriage.

Burns had even suggested he was willing to leave his wife for Gibson but she turned him down.

The officer had resorted to the bottle for comfort until finally he started attending Alcoholics’ Anonymous.

Sadly, during the manhunt for Spector – also know as Operation Music Man – and working with Gibson again, all wounds were reopened.

Burns started drinking again after falling off the wagon and compromising his career.

He even made a drunken pass at Gibson in her hotel room, but she gave him the cold shoulder with Burns profusely apologising too little too late.