LEO VARADKAR was brutally shamed over the strategy he used to persuade the EU that the Irish border was an issue of utmost importance by DUP leader Arlene Foster, who said his actions were "wrong".

The then Taoiseach Leo Varadkar, who is now the Tanaiste, negotiated the Northern Ireland Protocol with Prime Minister Boris Johnson last year.The protocol aimed to prevent a hard border arising on the island of Ireland, by ensuring a customs border would go down the Irish Sea instead. Northern Ireland would still leave the EU along with the rest of the UK, but would continue to follow the bloc’s trade rules for the single market and customs union.

This agreement was seen as a breakthrough at the time, and meant the withdrawal agreement could be passed into law.

However, the issue of the Irish border has returned to the forefront of ongoing Brexit rows recently after Mr Johnson proposed the Internal Market Bill.

The bill showed the Prime Minister had been true to his word in allowing Northern Ireland “unfettered access” to British markets — but it does breach elements of the protocol in the process.

Downing Street claimed the EU was even threatening to blockade British goods from entering Northern Ireland.

First Minister and DUP leader Arlene Foster spoke out about the matter this week and said it was important for the bill to establish “unfettered access” across the UK.

She explained: “The EU needs to stop using Northern Ireland to get their own way.

She went on to attack Mr Varadkar for using an old newspaper report of an IRA terror attack on the border in conversation with the EU back in 2018.

Brexit news: How customs were expected to work under the NI Protocol (Image: Express.co.uk) 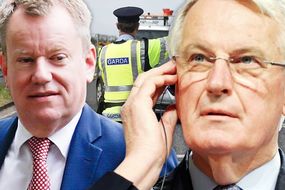 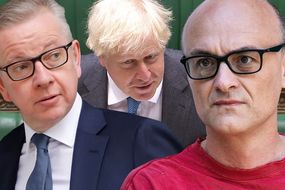 How Cummings and Gove planted seeds for withdrawal agreement row

This was during the most intense negotiations for the withdrawal agreement.

Mr Varadkar had passed a copy