TOBY REGBO is known for his role as Aethelred in The Last Kingdom TV series, and fans are keen to find out more about his relationships away from the show. Who is Toby Regbo from The Last Kingdom dating?

Toby Regbo was one of the main characters in The Last Kingdom on Netflix, but his character Aethelred died in season four. The 28-year-old actor is also known for his roles in the historical dramas Medici and Reign. Fans are keen to find out if Toby Regbo has a girlfriend, and Express.co.uk has everything you need to know.

{%=o.title%}
Who is Toby Regbo from The Last Kingdom dating?

Regbo is known for his role as the Mercian ruler Aethelred in the Anglo-Saxon hit series The Last Kingdom.

He was a fan-favourite in the series as his character's personality changed drastically before he died in season four.

Regbo, who is also a theatre actor and a musician, is from Hammersmith in London and his interest in acting started when he was at school.

His first TV role was in 2006 in the ITV film Sharpe's College and one of his better-known roles was in the film Mr Nobody in 2009.

Fans may also recognise him as a young Albus Dumbledore in the film Harry Potter and the Deathly Hallows - Part One.

The critically acclaimed actor is on social media and fans have been keeping an eye on his profiles for updates on his relationship status.

Toby Regbo: The Last Kingdom actor is not believed to be dating (Image: Getty) 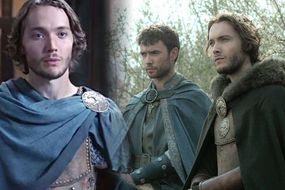 Last Kingdom: What did Toby Regbo think of Aethelred?

He was believed to have been dating Adelaide Kane between 2013 and 2014, and the Australian actress starred alongside Regbo in Reign.

However, in a Comic-Con interview back in 2014, Kane and Regbo dispelled these rumours, with Kane saying: "Fans really want us to date and it's just never going to happen and they are just going to have to live with [it].

"It will break their hearts, but we are married on TV and that's it." Fans picked up on the fact Regbo had responded with "don't say that" when Kane suggested they would never be together in real life.

One fan said on YouTube: "Toby's face when she said, 'It's just never gonna happen'."

Another fan said Kane thinks of Regbo as more of