LORRAINE KELLY, who is a host on her self-titled ITV show, has claimed she was criticised by a BBC boss over her Glaswegian accent after being told it was "terrible" and "offensive".

Lorraine Kelly has been entertaining viewers for the past three decades on the small-screen. The ITV favourite has addressed her earlier years working in television, where the presenter claimed she was rejected and mocked for her accent when she landed a job as a correspondent at BBC Scotland in the 1980s.

The 60-year-old presenter spoke candidly about her early career at the BBC and revealed she went for a role as a reporter.

But the Scottish-born broadcaster explained she rejected the gig amid claims her accent was considered "offensive".

"I went from East Kilbride News to BBC Scotland for a while - only for a year - and then I joined TV-am as their Scottish correspondent," Lorraine explained.

"When I went to work for BBC Scotland as a researcher, I got called into the boss's office and I thought he was going to give me a job as a reporter, because that's what I really wanted to do." 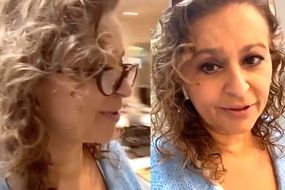 Lorraine continued to the Blank podcast that she ended up applying for a job at TV-am.

"So when I got told that, I just applied for a job at TV-am, and luckily the boss was an Australian and didn't really care how people spoke."

Lorraine Kelly has fronts her own daytime programme on ITV (Image: GETTY)