DONALD Trump has pointed out Joe Biden's embarrassing gaffe after the Democratic candidate said "we need to stop four more years of George".

US President Donald Trump took to Twitter to address his adversary’s mistake after he seemed to forget the President’s name. Mr Biden was speaking at a virtual concert when he apparently called Mr Trump by the name of “George”.

Mr Biden’s wife, Jill, who was sitting next to him at the time of the address, appeared to try to correct him, whispering “Trump” under her breath.

Tweeting from his controversial Twitter account, President Trump mocked his opponent, claiming he “could not remember my name”.

“Got some help from the anchor to get him through the interview.

“The Fake News Cartel is working overtime to cover it up!”

The Republican leader’s comments divided Twitter users, with many coming up with their own theories for the blunder.

Some claimed Mr Biden was referring to George Lopez, one of the hosts of the rally for Latino voters, and whose question he was answering. 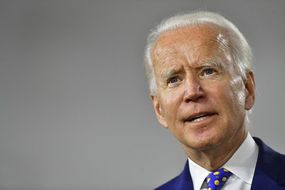