ANGELA MERKEL is under mounting pressure over her coronavirus strategy after Germany was plunged into a second nationwide lockdown.

On Wednesday, Ms Merkel announced Germany will enter a four-week national lockdown from November 2. It comes as Germans have taken to streets to protest Ms Merkel’s coronavirus measures – in a sign the German Chancellor is losing control of her lockdown plan. The dramatic shift back to draconian measures, which includes the closure of the hospitality sector, comes following a gruelling meeting between government officials and health experts for 29 hours.

During the summit, Ms Merkel held talks with leaders of the 16 federal states, in order to abandon local measures in favour of a centralised approach to tackle the virus.

Details of the discussions have since emerged showing huge divisions within the German government.

Lothar Wieler, president of the Robert Koch Institute (RKI), had warned Ms Merkel against the closure of restaurants, citing it is not a hotspot for the spread of the virus, German newspaper BILD reports.

The RKI is the disease control and prevention government body responsible for collecting data on the coronavirus.

Angela Merkel is under mounting pressure of her coronavirus strategy (Image: GETTY)

Under the new restrictions bars, restaurants, theatres, swimming pools and fitness studios will be closed for a month.

Social mixing will also be limited to two households or up to 10 people.

It is also understood Ms Merkel was in favour of going further, with police given the powers to inspect households to see if the rules were being followed.

Volker Bouffier, a member of Ms Merkel’s Christian Democratic Union party and leader of the German state of Hesse, led calls against the intrusive idea and forced a climb-down.

Pubs will be forced to close in Germany (Image: GETTY) 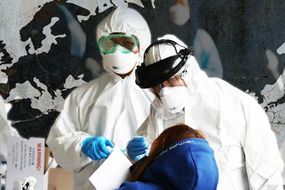 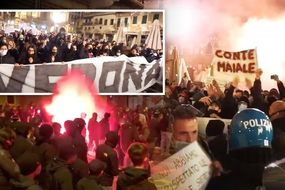 PREV Covid vaccine: Official warns there is ‘no evidence’ jab will stop someone ...
NEXT No new coronavirus cases in SA as Victorian border opens