Daryl Dixon and Alpha brutally stabbed each other on Sunday's episode of The Walking Dead and they both hovered near death from their severe wounds.

The Whisperers' leader while wounded received an unexpected visit from her daughter Lydia [Cassady McClincy], who'd been hiding in the woods for months. 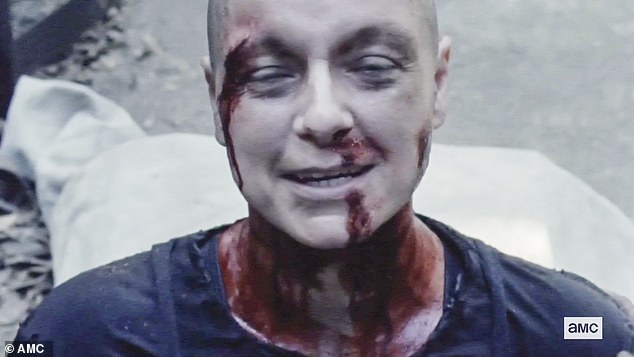 Bloody battle: Alpha was stabbed by Daryl Dixon on Sunday's episode of The Walking Dead on AMC

Lydia detested her mothers' violence, and had defected to Alexandria before going to live in the forest.

When Alpha [Samantha Morton] saw her again, she wanted Lydia to help her die, placing her daughter's hand atop a knife pressed to her stomach. 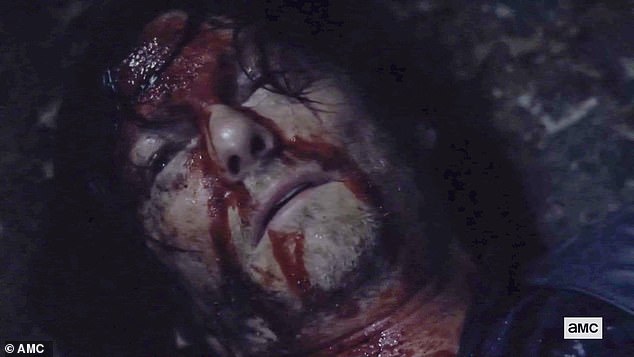 Head wound: Daryl also was gashed by Alpha in the head 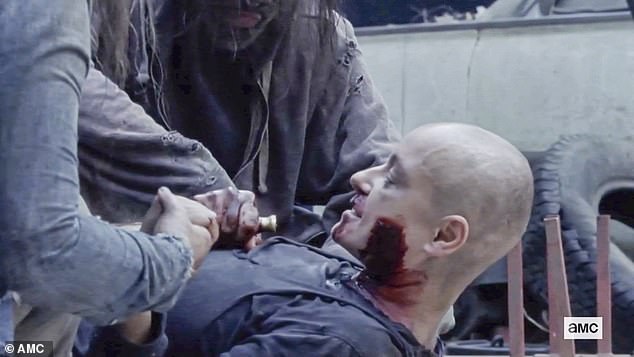 Severely wounded: Alpha survived the attack but was left behind by her daughter Lydia

Alpha understood that Lydia had come for Daryl [Norman Reedus], who once befriended her.

'They're human,' Lydia said of Daryl and his fellow survivors. 'Not perfect. Just human. It's all I ever wanted. It's what you never gave me.'

'I need you,' Alpha said, as Lydia stood and everything faded to black. 'I want you to… stay.' 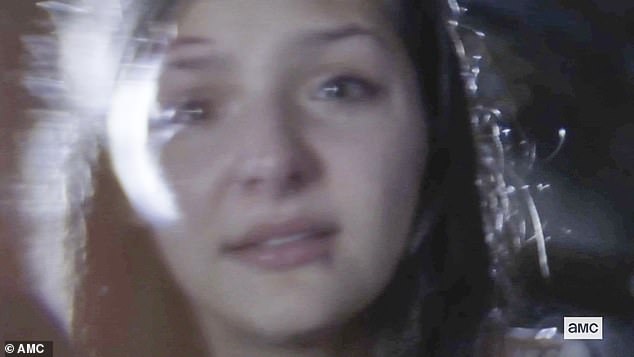 She's back: Lydia had been living in the woods for months before approaching her mom

When Alpha opened her eyes again, the sky was bright, and Lydia was gone.

As she stumbled, she reached for a knife stuck in a table, and saw that Lydia had carved a message with it, reading: 'Your Way is Not The Only Way.'

For the first time, Alpha looked shaken, and she knew that Daryl had disappeared with her daughter. 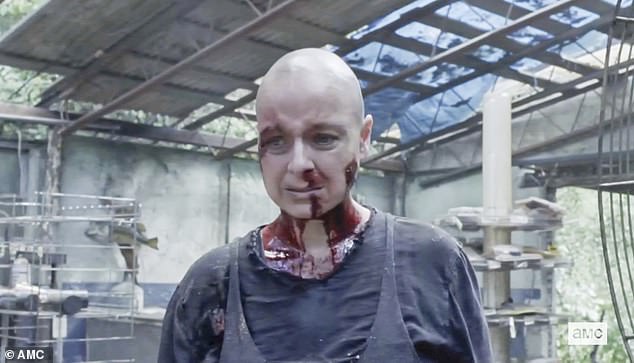 Girl gone: Alpha opened her eyes and found that Lydia was gone 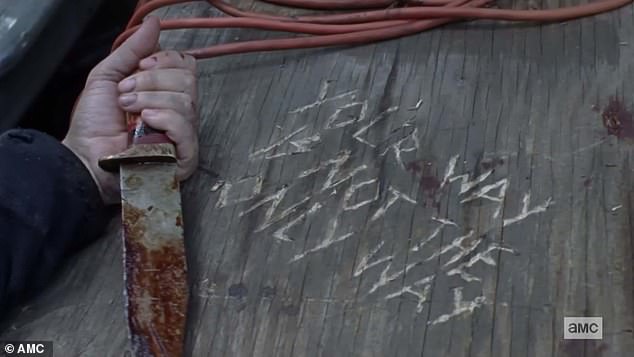 Wood carving: Alpha reached for a knife stuck in a table, and saw that Lydia had carved a message with it, reading: 'Your Way is Not The Only Way'

Her vulnerability reflected her increasing powerlessness as a leader, a theme explored throughout the season 10 episode, entitled Stalker.

Not only did Lydia abandon Alpha, but a confidante betrayed her, and even Beta went on the run.

Daryl wasted no time in attacking Alpha when he ran into her in the woods, either. 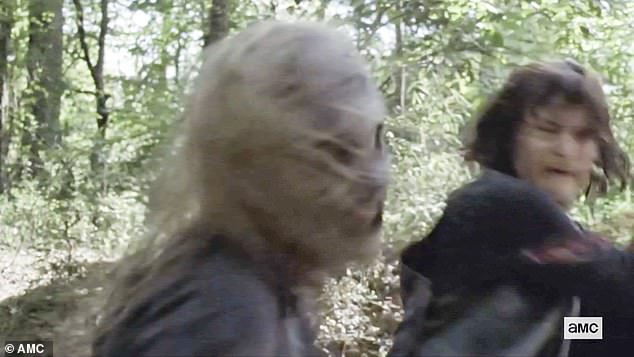 Outdoor battle: Daryl wasted no time in attacking Alpha when he ran into her in the woods

He had been tracking The Whisperers to find the entrance to the cave where they kept their horde, as two of his friends were trapped there.

With a crossbow, he shot one of the Whisperers as they led zombies out of the cave.

The group went after him, and one of them slashed his forehead, releasing a gush of blood. 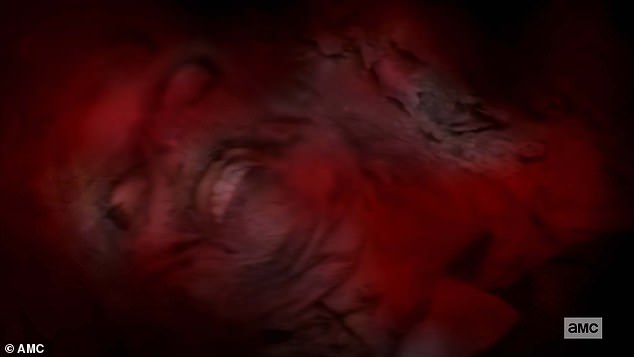 Bloody view: The slash on his forehead caused blood to cover Daryl's eyes and blurred his vision

Daryl tackled Alpha to the ground and stabbed her through the shoulder with a tree branch.

'Where are they?' he asked Alpha, referring to his missing friends. 'Tell me!'

Zombies approached Daryl, and he pivoted, giving Alpha a chance to stab his thigh. 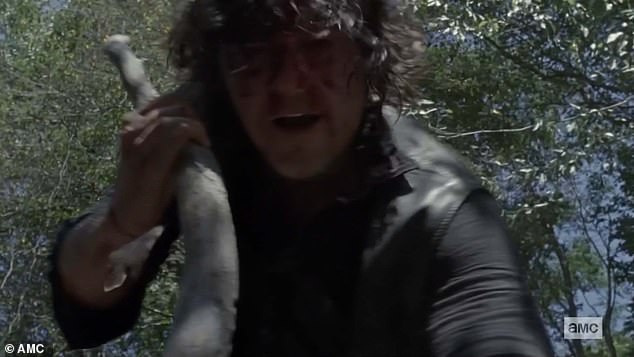 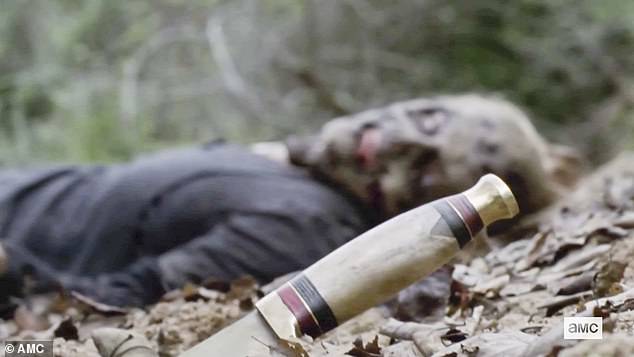 Knife handle: Lydia was down but still spotted the knife

Injured, Daryl limped off to a nearby gas station, with Alpha dragging behind him.

Once there, she smacked a pipe with her gun, drawing zombies to attack Daryl.

He took down three of them, even yanking the knife from his leg to dispatch one. 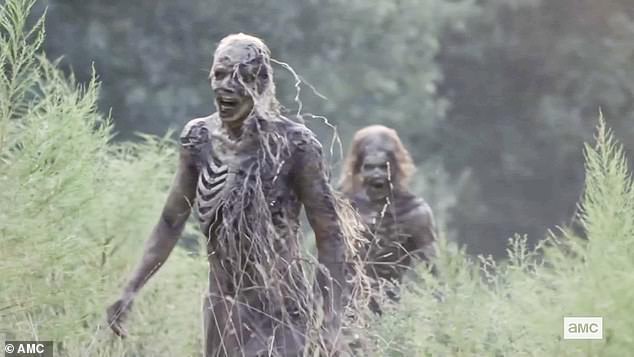 Walkers incoming: Walkers were attracted by Lydia to attack Daryl 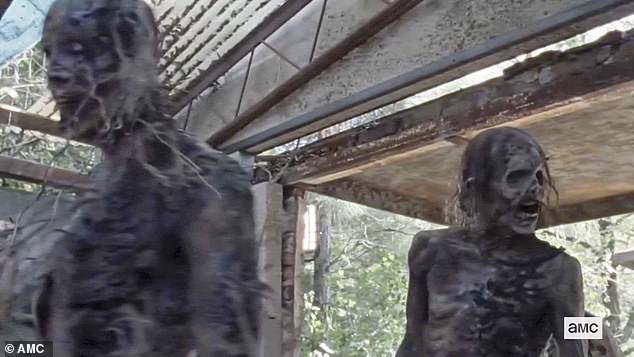 Getting closer: Alpha was able to attract walkers that soon discovered Daryl 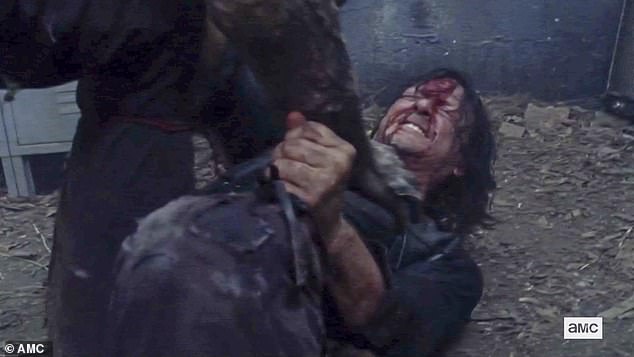 Leg wound: Daryl pulled the knife out of his leg and used it on a zombie

Alpha lay on the floor, suffering from her wounds, and began to fade in and out.

As she weakened, her once-total authority was already being challenged outside.

Gamma [Thora Birch], her trusted soldier, had slipped off to Alexandria, where she told the survivors about the cave accident and promised to help. 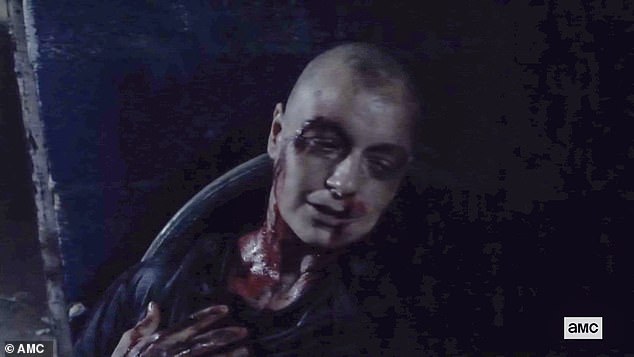 Fading out: Alpha was fading in and out from her wounds

She wanted to see her nephew, whom they'd adopted when the Whisperers abandoned him.

Rosita Espinosa [Christian Serratos] thought Gamma was lying, and punched her before getting her thrown in Alexandria's prison.

She told Gamma that the last Whisperer held there had killed the father of her baby, though Gamma denied knowing about that. 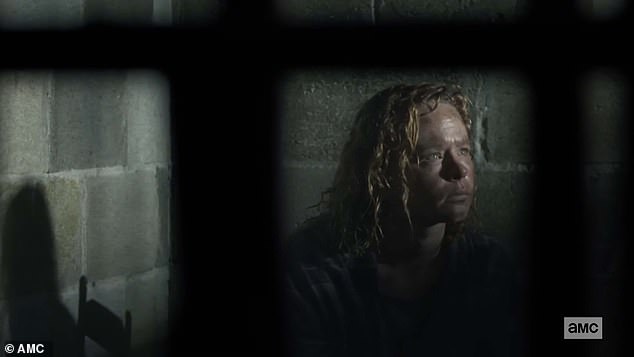 In custody: Gamma [Thora Birch] had slipped off to Alexandria, where she told the survivors about the cave accident and promised to help

'It's amazing how much you say you don't know,' Father Gabriel [Seth Gilliam] mused, emphasizing that she'd have to prove she was different from the other Whisperers.

'Then you die,' Rosita answered. 'No torture. No games. No second chances.' 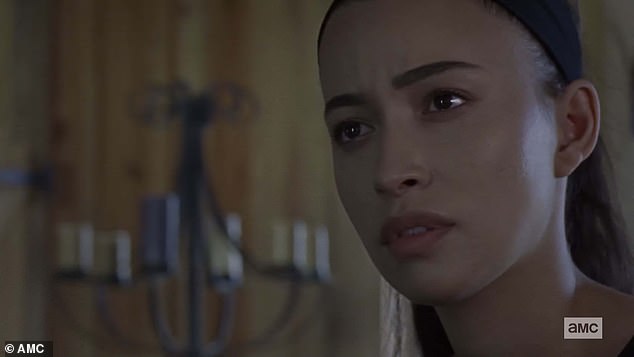 Intense questioning: Rosita Espinosa [Christian Serratos] thought Gamma was lying, and punched her before getting her thrown in Alexandria's prison

She and Gabriel told Gamma that hiding information from them was the same as lying. 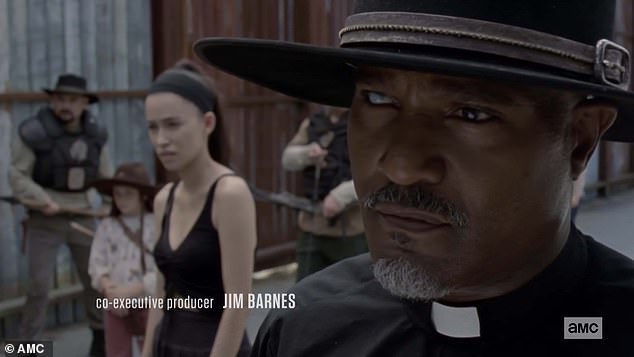 Gamma paused for a minute, tears falling from her eyes, and made a startling confession.

'I killed my sister,' she admitted. 'I killed her for Alpha. She didn't even have to ask. I just did it.'

Growing distraught, Gamma asked for a map to show the survivors how to infiltrate Whisperers territory, explaining that the borders were unguarded and most of the patrols near the cave.

Later, she spoke to a friendly Judith Grimes [Cailey Fleming] through the prison window. 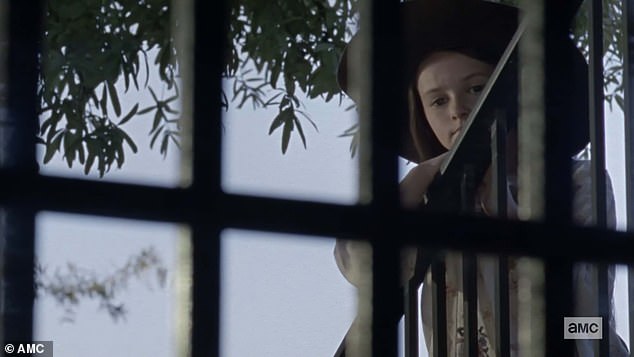 Gamma told Judith that her name was Mary, her