A couple of months ago my mum Michele had a minor operation. It wasn’t anything serious – just the correction of muscle weakness on her left eye. But it involved a heavy sedation and affected her sight. Barely 60, she’s a sharp, self-assured woman. A little anaesthetic was no big deal, she assured me. Yet when I met her at the hospital post-procedure, she was uncharacteristically feeble. ‘You’ll have to take your daughter’s arm to walk to the toilet,’ instructed the nurse.

Later, as I bundled her out of the taxi and into her house, a painful thought occurred. Soon I’d have to leave her – and she’d be all alone.

I’ve written in these pages before about the death of my father Jeff when I was 12. It left Mum, at just 48, a widow. For six years before that she’d been thrust into a life she’d never planned for, as my father battled a rare and debilitating form of cancer. 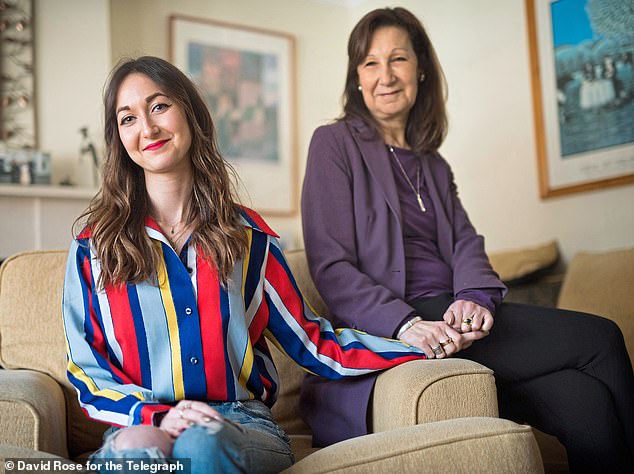 Eve Simmons with her mother, Michelle, at home. It’s clear that despite appearances, she never found the answer to the all-important question after the death of a partner: what’s next?

Forced to leave her senior role in publishing to care for him, the colleagues she’d left behind were making vital contacts, climbing the career ladder and being offered 30 per cent pay rises in the years to come. My mother, on the other hand, was schlepping Dad to radiotherapy and chemo sessions, concocting creamy puddings to keep his energy levels up and attempting to slot in some freelance work.

Much of her ingenuity went into protecting my brother Sam and me from the ghastly realities of Dad’s illness, keeping our childhood ‘normal’ for as long as possible.

Since Dad died, she’s tried to fill the carer gap with various job roles, visiting friends abroad and voluntary work. Most of the time, I have to trust that she’s fine, mainly because, as a 28-year-old woman with my own partner and career, I have to. But sometimes, the bleak reminders of the reality of our family tragedy – and its endless repercussions – are unavoidable. Seeing Mum forced to sell our family home five years ago, because it was too big and expensive to run on her own, was one.

More recently I watched as, still barely conscious after her eye op, she stockpiled a mound of pills, water bottles and snacks on top of her duvet, before shooing me away. ‘There’s no one here to bring anything up to me,’ she said, candidly.

It’s clear that despite appearances, she has never found the answer to the all-important question after the death of a partner: what’s next?

In a bid to help her – and the two million other Britons who every year find themselves in a similar position – this newspaper called on readers for advice.

In November, our resident GP Dr Ellie Cannon asked readers to get in touch about how to cope after the loss of a terminally ill life partner. Hundreds of you did, and here we’ve gathered some of your best suggestions and advice.

There are also some tips of my own, and from qualified experts. We hope that sharing them will make the next, bewildering chapter that little bit less scary.

When I asked Mum if there’s something she wished she’d done differently, she replied: ‘I should have thrown myself into work and meeting new people sooner, rather than later. But at the time, I had two kids who needed me around and they mattered more.’

Of course it wasn’t long after Dad died that Sam and I were at university, leaving Mum home alone.

Spending time on your own, she says, gives your confidence a knock. ‘Then you get used to your own company and become a bit apprehensive of going into a room of people you don’t know, or trying new things,’ she says. 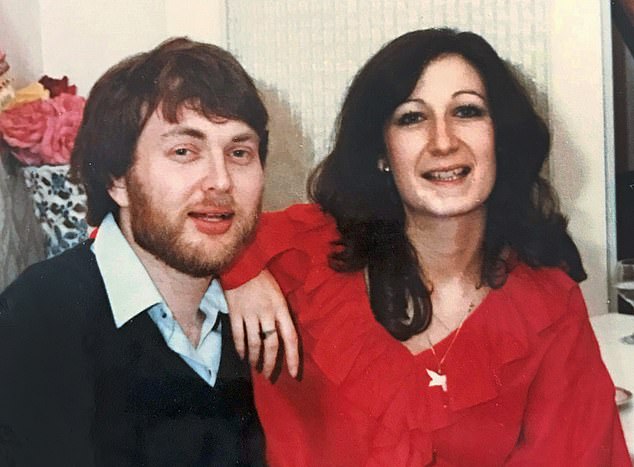 Planning a life together: Eve's parents, Jeff and Michele, at their engagement party in 1981

Yet studies show that diving head first into the thing you’re most scared of is the most effective way to conquer social anxiety.

So try going to local clubs – found on noticeboards in churches or local shops – with a good friend to ease you in.

And there’s no such thing as ‘too quick’, say the experts. Dr Paula Smith, a health psychologist with an interest in carers, says: ‘The latest research about grief shows that immersing yourself in normal life soon afterwards is a positive thing. It gives people a break from being immersed in the sadness.

‘You can’t talk about it all the time, it becomes overwhelming. Even going back to work can bring you back into your life.’

For women of working age, organisations such as the Carer’s Trust, local hospices and Citizens Advice can offer advice about how to get back on to the career ladder, step by step.

You don’t have to find a new partner

People often ask me: ‘Why hasn’t your mum remarried?’ Finding another partner seems like an obvious next step and I’ve often hoped Mum would, for my own peace of mind. Yet despite countless set-ups and a few short relationships, it never happened.

One of the most common difficulties in the immediate aftermath of losing a loved one is sorting through the endless reams of so-called ‘death admin’.

The easiest way to tackle it? Do it in advance.

Emma Aldridge, from Carers UK, says: ‘It’s not always possible, but if you can, prepare wills, power of attorneys and third-party financial agreements before the inevitable. It then leaves space for you to just focus on grieving when the worst does happen.’

Your local branch of the charity Age UK can help, as can online advice services such as moneysavingexpert.com, the goodgrieftrust.org and the NHS website.

For legal aid, contact the Law Society. Citizens Advice can also provide a case worker to work alongside you and tell you about benefits you might be entitled to, such as a widow’s pension.

I’ll always remember the large, lever-arch folder, bursting with papers, on the shelf in my mum’s home office.

The label on the spine read: ‘What Michele Did Next.’

Practical as always, my father had detailed specific instructions for the logistics, meaning she didn’t have to turn to good old Google.

Some people aren’t as lucky.

‘I already met the person that I wanted to spend my life with and he’s not here any more,’ she says.

‘In the end, no one else has compared to him.’

One, a man in his 40s who lost his wife to brain cancer five years ago, wrote of the pain he felt without his ‘dream girl’.

Others said they couldn’t even fathom the idea of letting another person into the life they shared with their beloved.

And experts agree that a new partner isn’t always the answer. ‘There’s often a sense that three people are in the relationship,’ says Dr John Troyer, Director of the Centre for Death and Society at the University of Bath.

‘Just because a person is dead doesn’t mean you don’t still have a relationship with them. It can be tricky to know how much is an appropriate amount to talk about them, and new partners feel threatened. For some people it feels right to meet someone else, for others it doesn’t. Both standpoints are equally valid and normal.’

Routine is your friend in times of grief