Britain has recorded nearly 4,000 new Covid-19 cases for the first time since the start of May and the number of people being admitted to hospital has risen once again, adding to mounting fears the outbreak is spiralling out of control again.

Official data shows infections have risen 40 per cent in a week. The seven-day average of daily infections currently stands at 3,286, a massive jump on the 2,358 last Wednesday.

The UK hasn't recorded more than 4,000 new cases a day since May 8 after the crisis fizzled out and dropped to record lows in July.

The outbreak slowly started to grow after restrictions were lifted on 'Super Saturday' at the start of July, allowing the nation to finally enjoy some of their summer after being in lockdown since March. Infections have soared in the past fortnight after teachers and pupils went back to school and workers dashed back to their offices.

Health chiefs also announced 20 more laboratory-confirmed Covid-19 deaths across all settings today. Wales was the only home nation to declare no new victims.

Separate figures show hospital admissions in England — another way of measuring the severity of the pandemic — are starting to rise again. Another 172 newly-infected patients needed NHS treatment on Monday, with the figure being above 100 for almost a week. For comparison, the average number of admissions dropped to just 45 at the end of August.

It come as government figures reveal Covid-19 cases are soaring among middle-aged people in England and have risen by upwards of 90 per cent in a fortnight as the outbreak continues to grow, official figures show. But adults in their twenties — who aren't as vulnerable to the disease — are still driving the outbreak, according to Public Health England.

Government officials say a second wave of Covid-19 in Britain would not be nearly as bad as the first — which killed between 40 and 55,000 people — because we are better at containing the virus through local lockdowns and social distancing measures, and that medical breakthroughs have helped to slash the death rate. 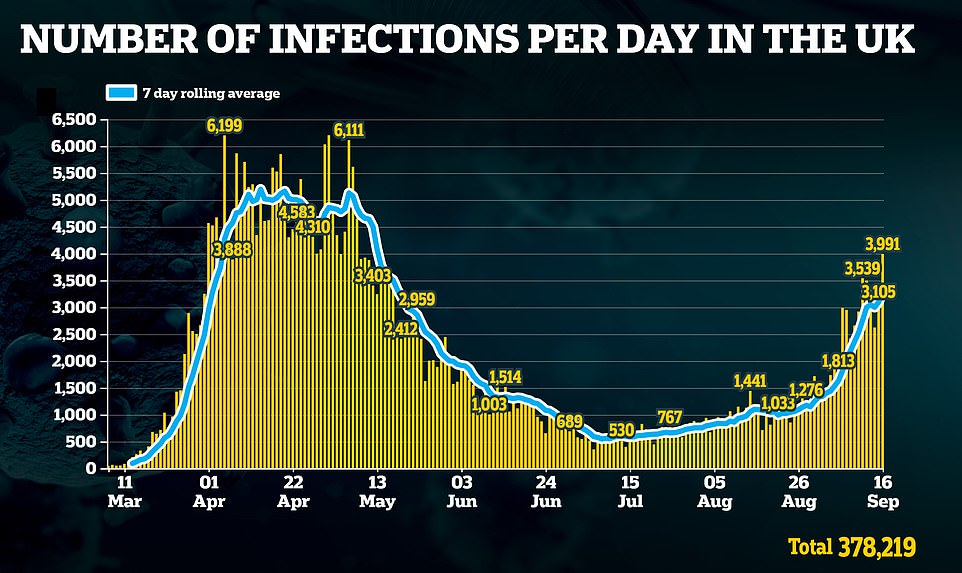 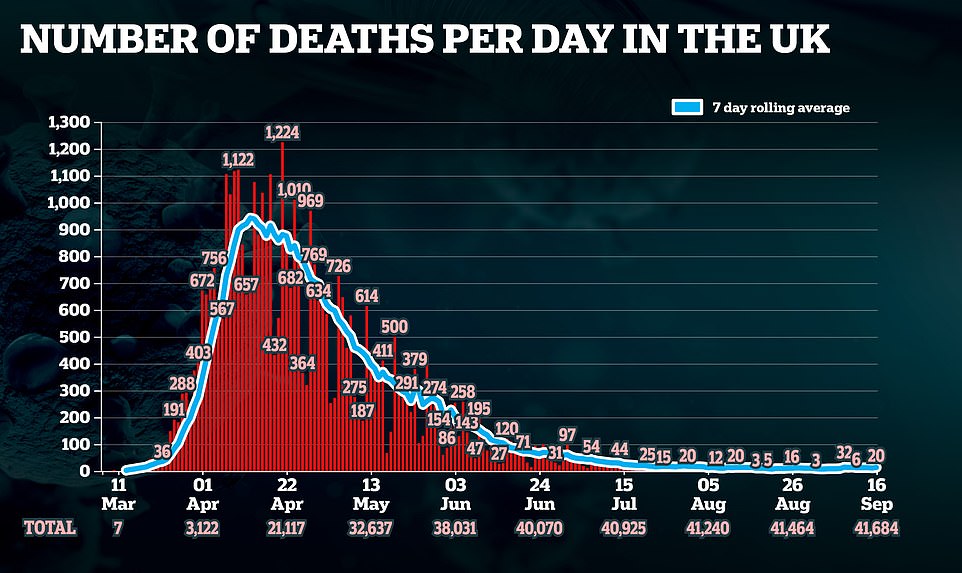 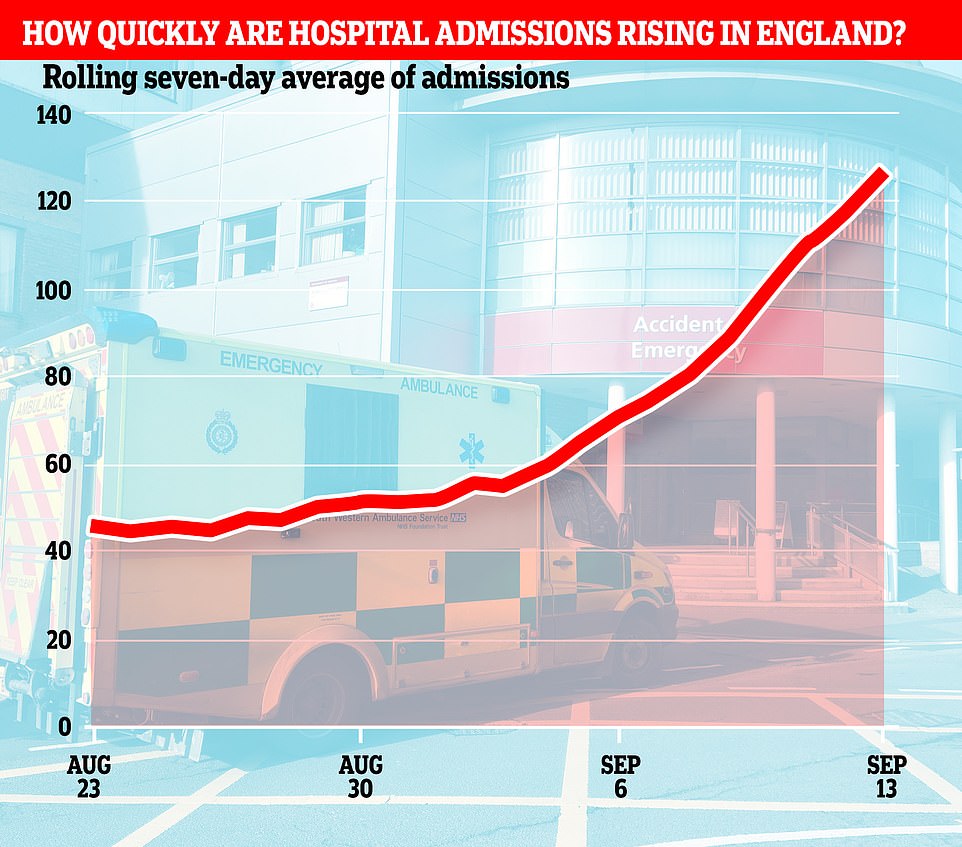 Hospital admissions — another way of measuring the severity of the pandemic — have doubled in England over the past ten days. More than 150 newly-infected patients required NHS treatment on Sunday, up from a rolling seven-day average of 52 on the last day of August

How hospital admissions have changed over time: Data shows how they peaked at more than 3,000 admission a day at the start of April. Circled in red is the most recent four weeks worth of data 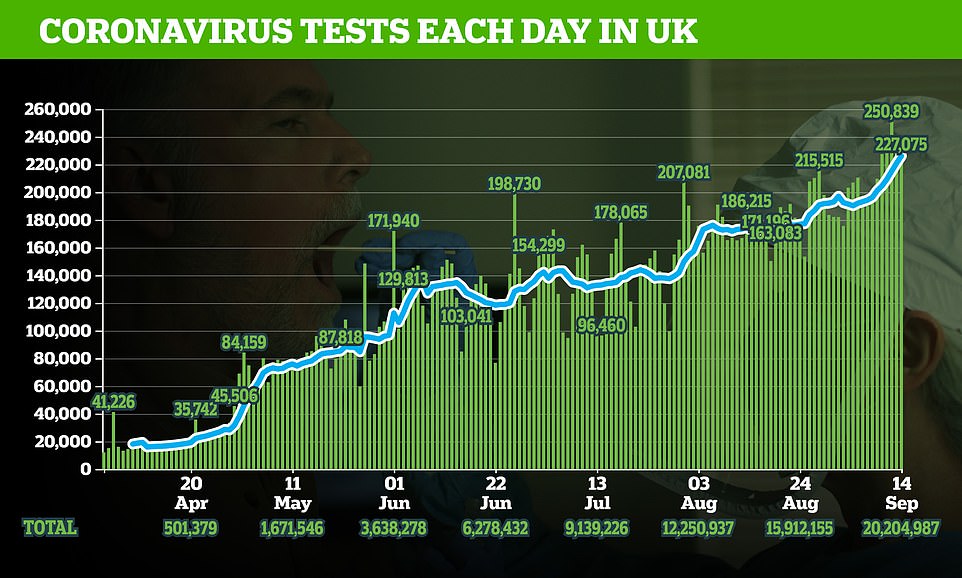 In other coronavirus news today:

Britons could face an even tougher lockdown within two weeks unless the Rule of Six brings down coronavirus cases, it was claimed today, with a possible option being a 10pm curfew on pubs;   Rhondda in south Wales will be placed under a local lockdown from 6pm on Thursday following an increase of coronavirus cases;   A hospital in Manchester accounted for a third of all Covid-19 deaths in England last week, it was revealed today amid fears the life-threatening disease is spreading between wards.
SECOND WAVE WON'T BE AS BAD, GOVERNMENT OFFICIALS CLAIM

A second wave of Covid-19 in Britain would not be nearly as bad as the first because we are better at containing and treating the virus now, Government officials have claimed.

One reason for this prediction is the fact that we now know so much more about the virus. This includes medical advances, such as the discovery that steroid treatment dexamethasone can cut the risk of death from coronavirus by a third.

Nonetheless, they stress that it is wrong to assume that the virus is only circulating among the young. While many new cases are patients aged between 17 and 21, the latest statistics show infection rates for those in their 50s and 60s are now as high as they were for those in their 20s several weeks ago.

The drastic rise of 3,991 cases today is the highest daily figure since May 8, when

It comes amid continuing concerns over the inability to access tests in England, and delays in getting results back quickly.

A surge in demand for coronavirus tests following the lifting of several lockdown restrictions this summer, coming to a head in the past few weeks with schools re-opening and a back-to-work drive, has led to local shortages. Many people with symtoms have reported being directed to test sites hundreds of miles from home.

Boris Johnson defended the troubled Covid-19 testing system today as the Government draws up a list setting out who will be at the front of the queue for coronavirus tests after a 'colossal spike' in demand.

Care home residents and staff are likely to be near the top of the list, as Mr Johnson acknowledged fears of a fresh coronavirus crisis in care homes.

Deaths being announced each day by the Department of Health have tumbled since the peak of Britain's Covid-19 crisis, with more than 1,000 patients killed on some days in April.

The most up-to-date government coronavirus death toll — released yesterday afternoon — stood at 41,637. It takes into account victims who have died within 28 days of testing positive.

The deaths data does not represent how many Covid-19 patients died within the last 24 hours. It is only how many fatalities have been reported and registered with the authorities.

And the figure does not always match updates provided by the home nations. Department of Health officials work off a different time cut-off, meaning daily updates from Scotland and Northern Ireland are out of sync.

The toll announced by NHS England every day, which only takes into account fatalities in hospitals, doesn't match up with the DH figures because they work off a different recording system.

For instance, some deaths announced by NHS England bosses will have already been counted by the Department of Health, which records fatalities 'as soon as they are available'.

The government's official toll is different to the figures compiled by the ONS, which includes suspected fatalities where coronavirus was mentioned on a death certificate and not just lab-confirmed ones.

ONS data released yesterday also revealed the total number of deaths in England and Wales has also fallen below the five-year average for the first time in a month, dropping 15.7 per cent below the average expected. Experts said this was because it contained the August bank holiday, which would have caused a recording lag. 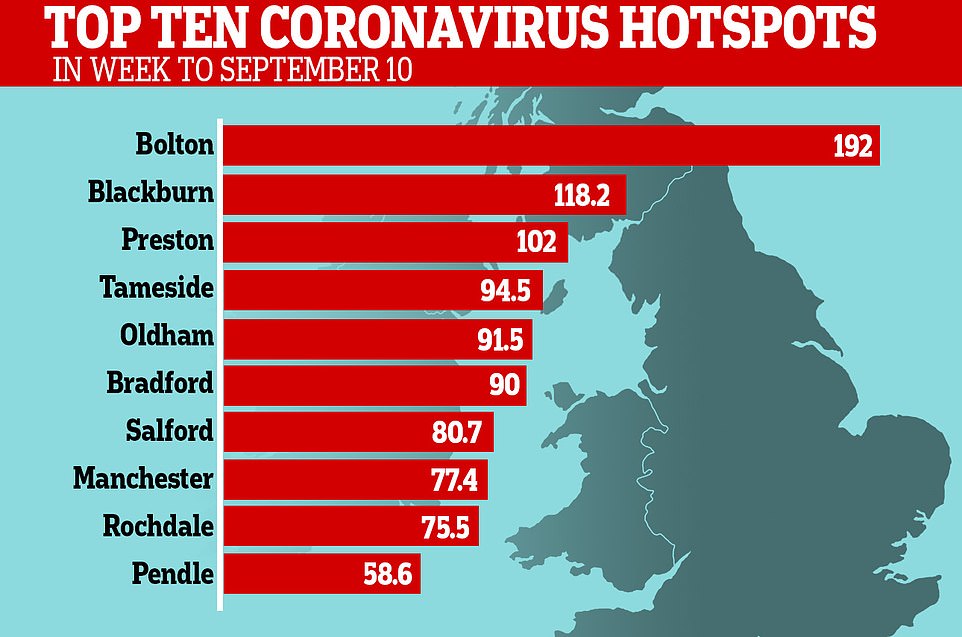 Curfews, pub closures and small gatherings only: how the UK could throttle second wave

Britain could follow the example of Belgium in taking steps to throttle the rising number of coronavirus cases.

Brussels was able to curtail a second wave of coronavirus by limiting the number of people who could socialise together and imposing a nationwide curfew.

The European country experienced a resurgence of the virus in mid-July that was comparable to the UK's current trajectory.

On July 29, officials there brought in new rules reduced the number of people who could socialise together from 15 to five and introduced a 10pm curfew on the entire population.

Coronavirus infections started to rise in Belgium in mid-July, with the weekly case rate going over 35 per 100,000 by August- the level currently being felt in Britain - and daily infections breaching 1,000. The numbers have fallen over recent weeks, with only 194 new cases reported on September 1.

Chief Medical Officer Chris Whitty is among those who have praised the actions of the Belgian Government to  tackle the outbreak.

Last week he said Belgium was a 'clear indication that if you act rapidly and decisively when these changes are happening, there is a reasonable or good chance of bringing the rates back down under control.' Such a move would allow people to go still go to work and school but would place curbs on nightlife, which could place high pressure on the hospitality industry, with pubs and restaurants forced to close early.

A further 11 people who tested positive for coronavirus have died in hospital in England, bringing the total number of confirmed reported deaths in hospitals to 29,687, NHS England said on Wednesday.

Patients, who died between September 11 and September 15, were aged between 69 and 98 and all had known underlying health conditions.

Public Health Wales said no further deaths had been reported, with the total number of deaths since the beginning of the pandemic remaining at 1,597.

However, there have been a further 199 cases of Covid-19 in Wales, bringing the total number of confirmed cases in the country to 19,880.

Today the Welsh Government announced that Rhondda Cynon Taf will be placed under a local lockdown from 6pm on Thursday following an increase of coronavirus cases.

Residents of the South Wales region will be banned from meeting households indoors, travelling outside of the council area and face masks must be worn in shops, similar to Caerphilly which is also under a local lockdown.

The local authority area's incidence rate hit 82.1 per 100,000 people over the past seven days.

The increase goes well above the infection rate of 50 per 100,000 people marked as the threshold that saw nearby Caerphilly go under local lockdown on September 8.

Health minister Vaughan Gething said: 'We have seen a rapid rise in cases in Rhondda Cynon Taf in a very short space of time, linked to people socialising indoors and not following social distancing guidelines.

'We now have evidence of wider community transmission in the borough, which means we need to take urgent action to control and, ultimately, reduce the spread of the virus and protect people's health.'

Meanwhile Britons could face an even tougher lockdown within two weeks unless the Rule of Six brings down coronavirus cases, it was claimed today.

Ministers and government officials insist they are ready to take more draconian steps to stop the spread, despite a wave of criticism. 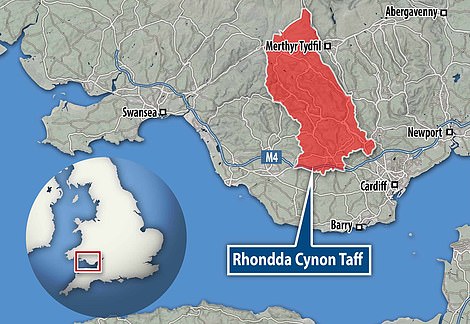 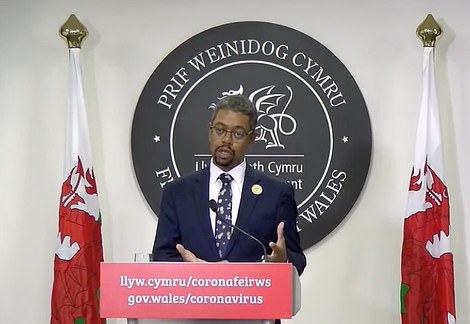 One hospital in Manchester accounted for a third of all Covid-19 deaths in England last week, it was revealed today amid fears the life-threatening disease is spreading between wards.

Tameside General Hospital, in Ashton-under-Lyne, suffered 18 laboratory-confirmed coronavirus fatalities in the week to September 10, treble the six fatalities the week prior.

Figures from NHS England, which records all deaths in the country's hospitals, show a total of 52 victims were registered in the same week.

Some of the infected patients who died at the 500-bed Tameside General Hospital had been admitted for other illnesses before catching the coronavirus during their hospital stay, sources have claimed.

Health chiefs are now investigating the spate of deaths but the hospital insists it is a 'routine review' during the pandemic.

The deaths at Tameside General Hospital, which serves the surrounding area of Tameside and the town of Glossop in Derbyshire, were described by The Guardian as 'sudden and unexplained'.

It is currently unclear how many of the 18 Tameside patients died after catching Covid-19, while at hospital for another reason.

Well-placed NHS sources confirmed that at least some of the cases were the result of nosocomial infection – transmission within a hospital.

But hospital sources insisted that 'the majority' of the 18 people had Covid-19 before they came in, suggesting there has been an increase in admissions for the disease in Tameside as a result of rising cases.

The NHS checked last week whether the hospital has stringent infection control, preventing

PREV How to get a private Covid-19 test in the UK (but it could cost you £350)
NEXT People who wear eyeglasses FIVE TIMES less likely to be diagnosed with COVID-19 ...