'We would love that opportunity': Great Britain captain Tim Henman relishing potential quarter-final meeting with Australia after beating Moldova in ATP Cup... but will have to wait before their spot is confirmed Great Britain put themselves in a strong position to qualify for ATP Cup last eight  Tim Henman's side romped to a 3-0 win over bottom team Moldova on Tuesday Should they go through as group winners, they will face Australia on Thursday For them to progress as winners Belgium will have to beat Bulgaria 2-1 If not then they will watch on for other results before learning their fate

Tim Henman's Great Britain team put themselves in a strong position to qualify for the quarter finals of the £12million ATP Cup after a comprehensive mauling of Moldova on Tuesday.

They romped to a 3-0 win over the bottom team of their qualification group at the Ken Rosewall Arena, with every rubber a straight sets win, including Dan Evans taking down world No 46 Radu Albot 6-2 6-2.

It meant that they were waiting for the final group match between Bulgaria and Belgium, being played on Tuesday evening local time, to find out if they would go straight through as winners. 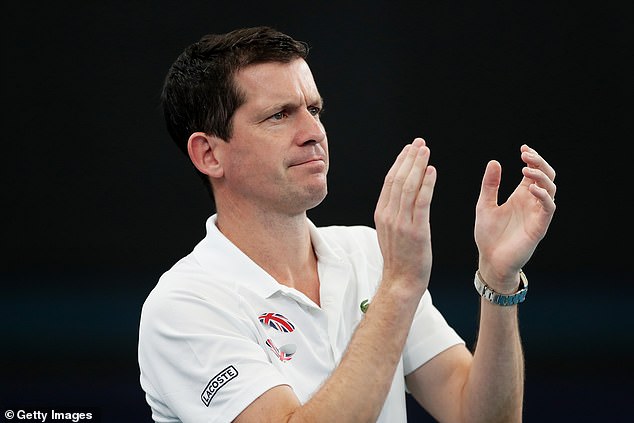 If not they would have to wait and see if they would make one of the two quarter final places open to the highest-scoring runners up from the six groups.

For them to progress as winners Belgium will have to beat Bulgaria 2-1, which is a feasible enough scenario, meaning a match on Thursday versus hosts Australia. If not then they will be watching on anxiously for other results.

While a multitude of outcomes are possible GB looks mathematically well-placed to take one of the last two spots in the last eight, which would result in a tough quarter final, against either Spain featuring Rafael Nadal, or Serbia featuring Novak Djokovic.

Regardless of what happens Henman pronounced himself pleased with the

Video shows rescue workers help an injured hiker get down from atop of 400-foot ...