'Nobody is more frustrated than me': Oli McBurnie insists call to withdraw from Scotland squad was 'out of his hands' after injured striker then played in Sheffield United friendly McBurnie played for the Blades two days after pulling out of the Scotland squad His appearance in a friendly win over Derby angered some national team fans Steve Clarke said he was nowhere near fit enough to start up front against Israel

By Brian Majoribanks For The Scottish Daily Mail

Oli McBurnie has stressed his commitment to Scotland after returning to club action just two days on from pulling out of Steve Clarke's national squad.

However, Clarke moved quickly to defuse the situation, explaining how a conversation with Bramall Lane manager Chris Wilder left him convinced McBurnie was nowhere near fit enough to start up front against Israel in the Nations League on Friday night. 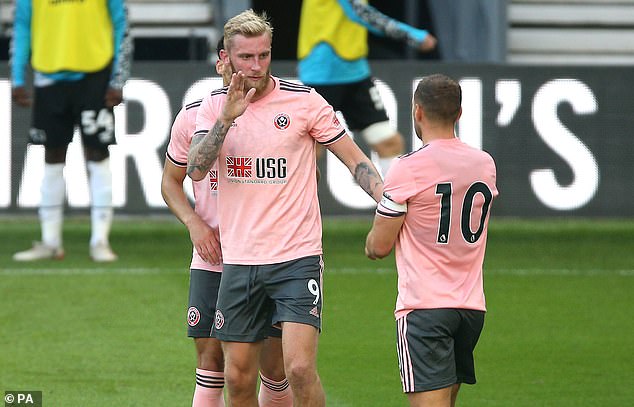 With the 24-year-old needing to work on his conditioning following a foot injury, the Scotland boss agreed with his Blades counterpart it was best for him to do so at his club.

Keen to add his side of the story, McBurnie insisted he would never let his country down and vowed to work his hardest to be fit for next month's Euro 2020 home play-off semi-final against Israel then the Nations League visits of Slovakia and Czech Republic to Hampden.

In a statement posted on social media, McBurnie said: 'Nobody is more frustrated than me at having to withdraw from the Scotland squad for this double header.

'I know both my club and international managers have explained the situation but I feel it's important I do too.

'The reality is I haven't been able to train at all for the last two weeks due to a cut in my foot that became infected.

'Given that pre-season coincides with the Nations League matches as a result of the Covid-19 impact on football, the last thing I wanted to do was to let myself

PREV sport news OLIVER HOLT: Pep Guardiola does not have the answers to the question of how to ...
NEXT sport news Bath 23-27 Wasps: Late penalty try drama gives Lee Blackett's side a lifeline