The US military is testing bullets that can be fired underwater, potentially enabling Navy SEALs to engage in submarine combat and sink enemy boats from below.

Water is 800 times denser than air at sea level, meaning normal bullets slow down underwater to the point that they’re rendered ineffective.

The bullets manufactured by DSG Technologies are made from tungsten – a metal with a high resistance to corrosion – and have a small hole in the tip.

This allows a bubble to form around the bullet as it travels through the water – a process called supercavitation.

The bubble reduces the drag of the bullet, allowing it to move more rapidly through water. 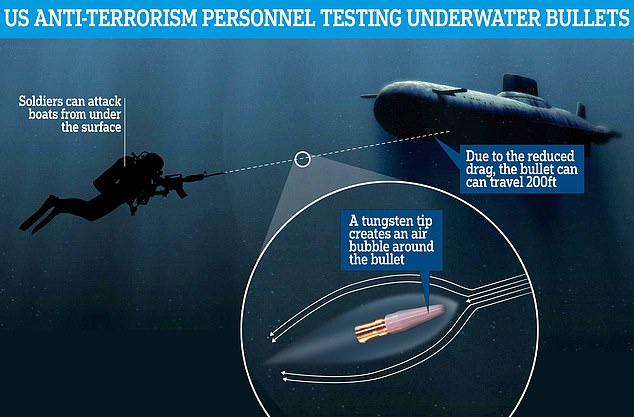 US military SEALs are will be able to attack boats from under the water, while tests are also reportedly underway to determine their effectiveness while shot from above

Norway-based DGS claims its ammo can travel 200 feet underwater and pierce through two centimetres of steel, fired from 55 feet away through water.

Supercavitation is an extreme form of cavitation – a physical phenomenon in which rapid changes of pressure in a liquid lead to the formation of vapour bubbles.

It can happen when water is accelerated to high speeds, like when turning a sharp corner around a moving piece of metal such as a ship's propeller.

The bubbles can be large enough to encompass an object travelling through the liquid, greatly reducing drag on the object. This enables it to achieve very high speeds as it travels.

The bullets also have an 'unconventional shape' and significant mass that give the bullets 'great armour piercing capability' against multi-layer structures, such as