The next meteor shower to light up the sky will be the Eta Aquariids and it will see dozens of shooting stars per hour this weekend - ending at the peak on Tuesday.

Eta Aquariids are created from the debris left behind by Halley's Comet and happen every year from the middle of April until the end of May.

Astronomers say to watch the shower you should 'get a comfy chair' and be prepared to sit outside for hours - but you won't need binoculars or a telescope. 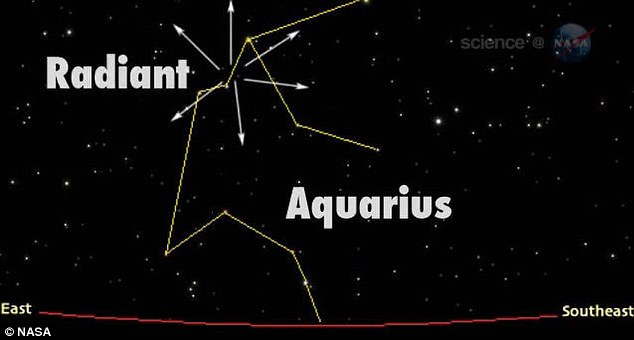 The meteors originate from Eta Aquarii – one of the brightest stars in the Aquarius constellation. For people in mid to northern latitudes, the radiant won't be very high in the sky, so you should be able to spot the meteors on the southern horizon

The Eta Aquariids are named after the constellation Aquarius as they fall from that point in the sky and specifically the star Eta Aquarii.

'For the best conditions, you want to find a safe location away from street lights and other sources of light pollution,' according to the Royal Museums Greenwich.

The Moon will be in its waxing gibbous phase during the peak of the shower but it will be below the horizon before dawn and shouldn't damper the viewing.

When out watching them don't just stare in on direction as

Justin Bieber takes his custom Drew motorcycle for a solo joyride around ...