Coronavirus may cause an increased risk of blood clots and blockages in the brain and could lead to a stroke, according to a new study by University College London.

The small study focused on six patients with confirmed COVID-19 who had suffered a stroke caused by the sudden loss of blood circulation to the brain.

The team, that included neurologists from the National Hospital for Neurology and Neurosurgery, saw an increase in D-dimer - a blood protein linked to clotting. 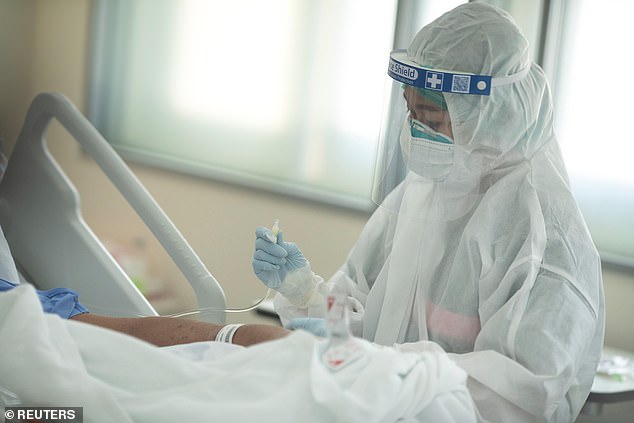 Coronavirus may cause an increased rick of blood clots in the brain and lead to stroke in some patients, according to a new study by University College London. Stock image

The article, published in the Journal of Neurology, Neurosurgery, and Psychiatry, couldn't confirm a direct link between coronavirus and stroke as it was a small study.

'It is also possible that the effects of social distancing measures and anxiety about attending hospital might have influenced the spectrum of ischaemic stroke mechanisms in patients seen at our hospital,' the authors wrote.

However, they say there was evidence of raised D-dimer in the blood - that is a production of antibodies created from an abnormal immune system response.

Corresponding author, Professor David Werring and colleagues looked at six patients with acute ischaemic stroke due to blockage of a large brain artery.

Acute ischaemic stroke is caused by the sudden loss of blood circulation to an area of the brain, resulting in loss of neurological function.

The findings suggest early testing for D-dimer in COVID-19 patients, could enable clinicians to prescribe specific treatments at a much earlier stage.

They say this might reduce the number of people subsequently having further strokes or blood clots elsewhere in the body.

Professor Robert Storey, Professor of Cardiology, Department of Infection, Immunity & Cardiovascular Disease, University of Sheffield, said finding a link between COVID-19 and stroke isn't surprising as the infection can cause inflammation in the body.

He said inflammation is linked to increased risk of blood clots forming in blood vessels which is the most common cause of heart attack and stroke.

'Inflammation can also accelerate the build-up of fatty deposits in blood vessels supplying the heart and brain, which can eventually lead to blood clot forming and blocking the blood vessels.'

All six patients (aged between 53 and 85) had a large arterial blockage, with markedly elevated blood levels of D-Dimer and confirmed COVID-19.

Researchers say this indicates the presence of abnormally high 'fibrin