Boris Johnson's war on 'Whitehall waste': PM launches tough review of EVERY government project, vowing to AXE those that do not represent value for money Boris Johnson told Cabinet ministers they must review every ongoing project Review focus is on making sure all government work represents value for money Means thousands of Whitehall projects and work streams will now be assessed  Conclusions will be presented to the Treasury ahead of the Budget on March 11

Boris Johnson has launched a massive review of every ongoing government project to make sure each one represents value for money, with those judged to be a waste due to be axed or overhauled.

The Prime Minister has tasked his entire Cabinet with assessing all of the work being done in their respective departments in a new war on frivolous spending.

Mr Johnson and Chancellor Sajid Javid told ministers at a meeting of the Cabinet this morning that 'tough decisions' will be taken ahead of the Budget on March 11 'in order to prepare the economy for the next decade'.

It means that thousands of projects will now be scrutinised in the coming weeks to see if they should continue.

The announcement of the review comes amid growing concerns about the cost of a number of big ticket government spending items, most notably the planned HS2 high speed railway project.

However, it is understood that no specific projects were mentioned by name during today's Cabinet meeting. 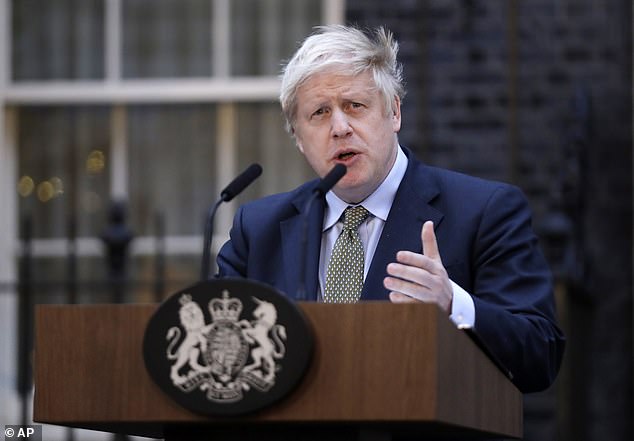 Boris Johnson, pictured in Downing Street on December 13 after his election victory, has instructed all of his ministers to conduct a review into the value for money of each and every government project

Every so-called 'legacy project' - those started under a previous government - will also be rated on whether they fit with the new administration's priorities and the latest Tory manifesto which propelled Mr Johnson to an 80-seat majority at the election last month.

The Prime Minister's Official Spokesman said: 'Cabinet held a discussion on the economy and upcoming fiscal events. The Prime Minister said the Budget will focus on delivering the priorities set out in the manifesto.

'This is a new government with a new mandate, including to level up across the country, invest in infrastructure and tackle climate change.

'The Prime Minister said there is a massive