Hundreds of passengers today arrived in Australia from the Chinese city of Wuhan, the epicentre of a new deadly virus which is spreading around the world.

The passengers from China Eastern flight MU749 were wearing masks as they made their way through Sydney Airport's arrivals hall just before midday after a 10-hour night flight on an A332 plane that can hold 234 people.

The passengers were screened in China before they boarded and, when their aircraft landed, they were asked by the pilot to declare if they felt unwell.

NSW Health had a team of four nurses and doctors, who wore masks but not full HAZMAT suits, at the airport to interview anyone who had cold-like symptoms before they went through customs.

The passengers were also screened by thermal imaging to check their temperatures - and given leaflets in English and Mandarin telling them to see a doctor if they suffered sweats, breathing difficulties or chills.

A plan was in place to take any passenger suspected of being infected to Westmead Hospital - but nobody was found to be sick.

One international student from Wuhan who was on the flight told Daily Mail Australia he was quizzed by officials on the way into the airport.

'A group of doctors wearing masks asked me if I had a cold and if I felt unwell, which I didn't,' he said. 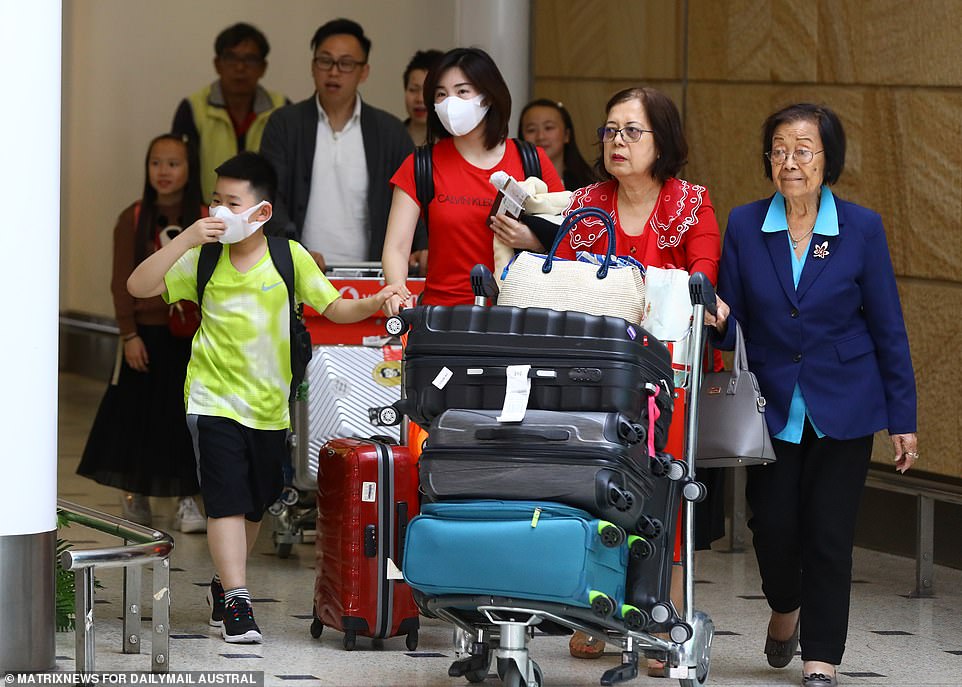 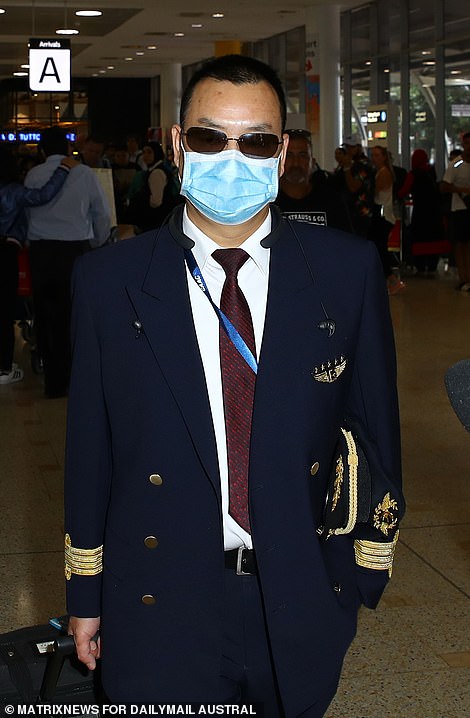 'They checked my temperature and then let me through. I got lucky because I'm on the last flight out of Wuhan.

'The situation isn't that bad there, it's not as bad as all the scare stories.'

Another passenger said they realised the situation was bad in Wuhan when the city was isolated. 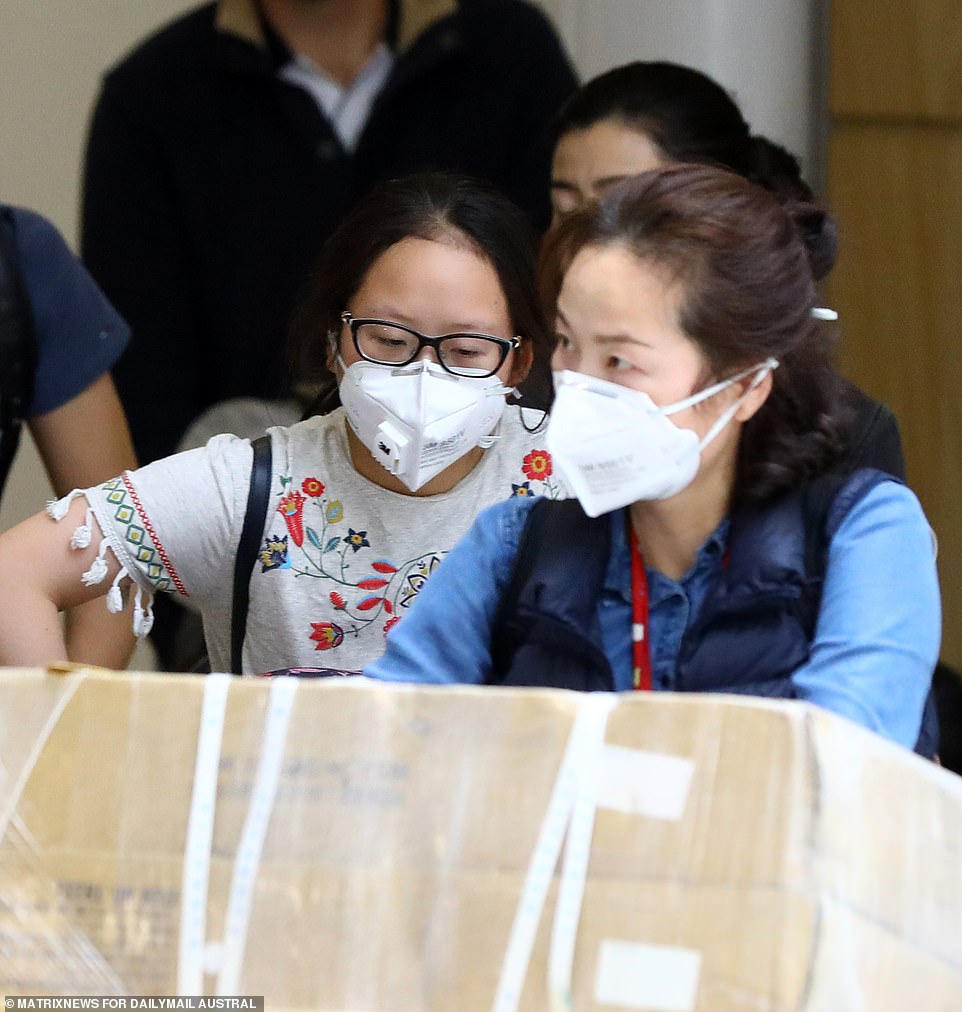 'I was shocked when I heard that flights and trains were cancelled. To tell people not to leave during New Year is a drastic measure.'

One passenger said officials went up and down the plane when it landed, quizzing all the passengers.

'They checked everyone but I wasn't really worried,' she said.

A passenger named Kevin, who held up his information leaflet as he posed for photos, said people travelling to Australia are worried about going home if the virus spreads. 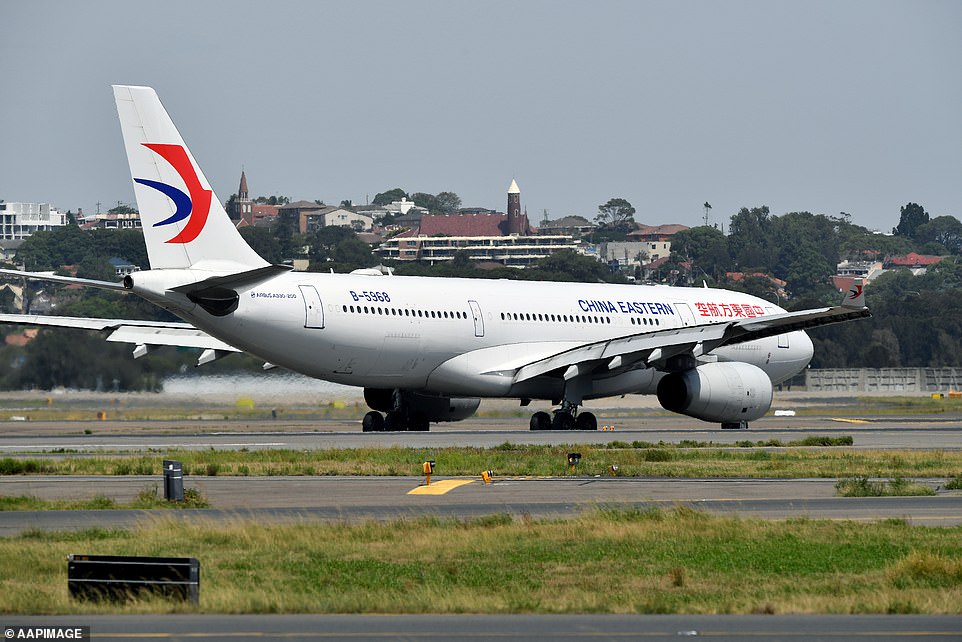 Flight crew were seen walking through the arrivals hall with masks and gloves. The captain, wearing sunglasses and a mask, was directed though the hall as a scrum of photographers took pictures.

Dozens of the passengers are likely to be visiting Australia as tourists or for family re-unions ahead of the Lunar New Year on Saturday, raising fears they will be traveling to places with large crowds such as Bondi Beach and the Sydney Opera House.

Staff working at shops in the arrivals hall said they were on high alert as the flight from Wuhan landed.

One mobile phone shop worker, who asked not to be named, told Daily Mail Australia: 'We're very concerned about it and we're taking precautions such as regularly washing our hands'. 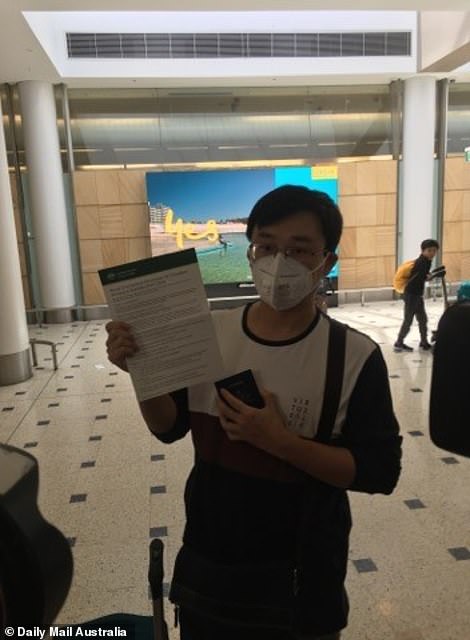 A currency exchange worker said she was concerned because she had been getting more ill more than usual since working in the airport.

She said: 'It's really scary and I'm really worried about the virus because it's easy for us working in the airport to catch infections. I would say I get a cold every few weeks - just because of the number of people passing through.

'Cancelling flights from Wuhan is a good thing,' she added.

Workers at the Sydney Airport information desk said they had been told by their bosses not to speak to the media under any circumstances.

The new coronavirus was discovered in Wuhan last month. It is believed to have spread from animals in the city's market and has already killed 17 and spread to five countries including the US.

Doctors on Wednesday said the number of cases around the world may be as high as 10,000.

Today's flight from Wuhan is the last one to enter Sydney because the Chinese government has now cancelled all planes and trains due to leave the city in a bid to control the infection.

'The rise in the mobility of the public has objectively increased the risk of the epidemic spreading,' Chinese National Health Commission vice minister Li Bin said.

Experts fear the new coronavirus, which is not yet named, may already be in Australia even though no-one in the country has been diagnosed. 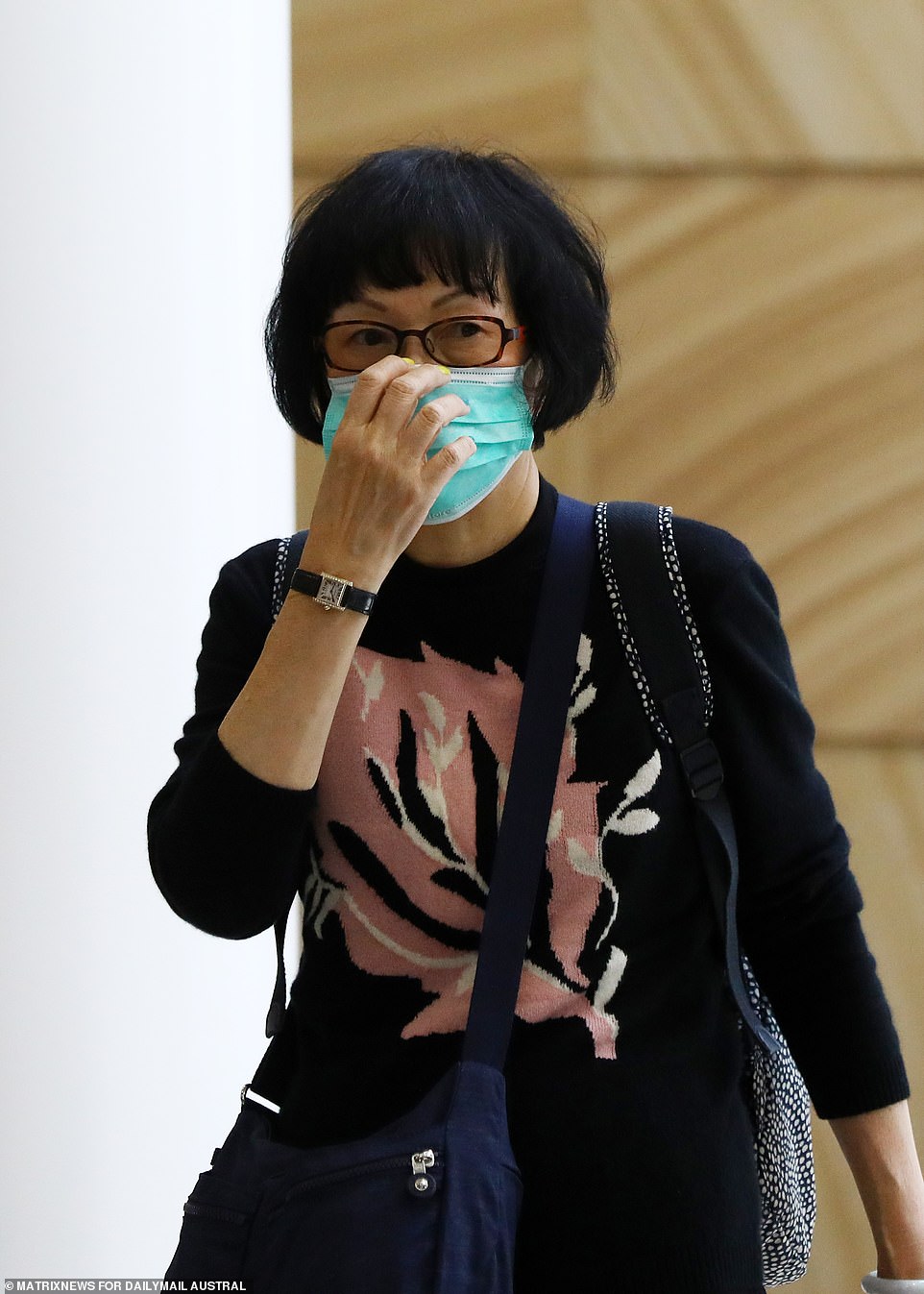 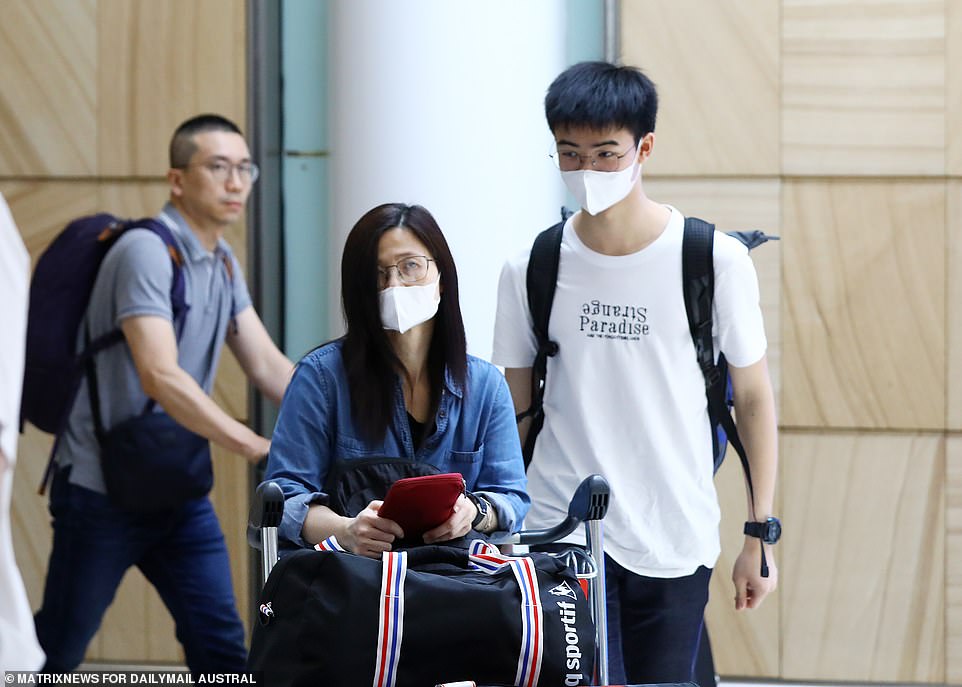 In a chilling warning, professor of global biosecurity at UNSW Dr Raina McIntyre said even using thermal imaging to detect passengers with high temperatures may not stop the virus getting into Australia

In an interview with Daily Mail Australia on Thursday morning, Dr Raina McIntyre, professor of global biosecurity at UNSW, said: 'It is possible that someone who is incubating the infection but is not yet ill is in the country.

'People can be incubating the disease and not have fever when they enter the country.'

In a chilling warning, Dr McIntyre said even using thermal imaging to detect passengers with high temperatures may not stop the virus getting into Australia.

She said: 'Some infections involve transmission of virus before any symptoms appear - influenza is a classic example of this.' 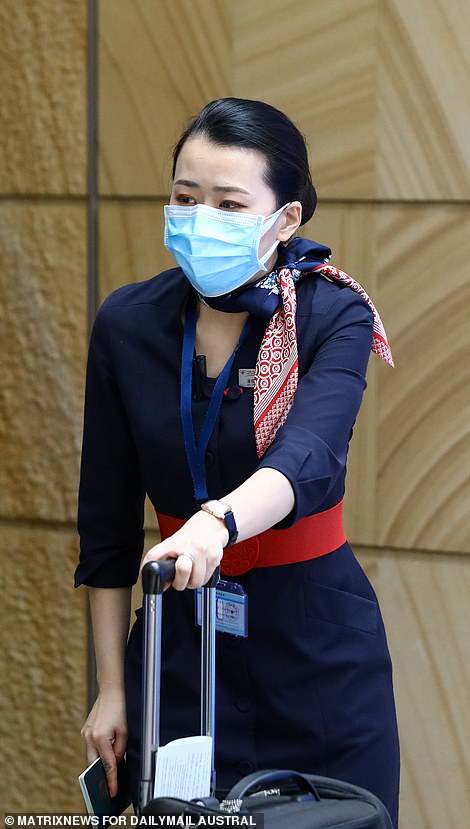 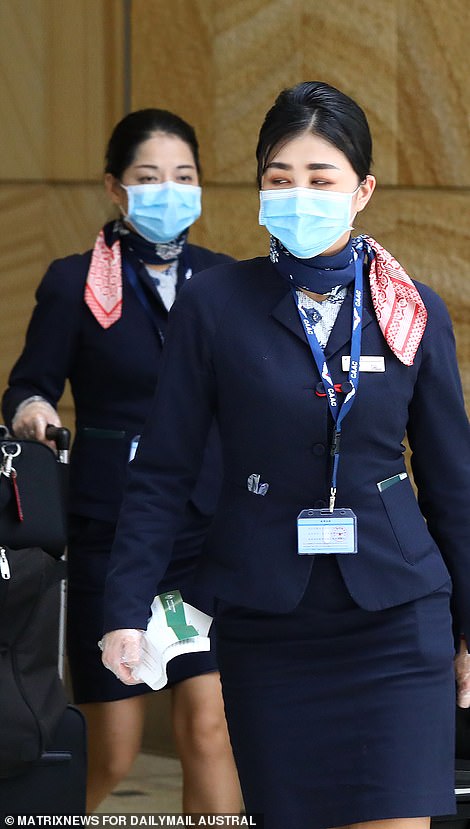 The flight's cabin crew are pictured walking into arrivals. Workers at the Sydney Airport information desk said they

PREV Iconic Hosier Lane is returning to its former glory days after it was attacked ...
NEXT Former Belgian-Nicaraguan political prisoner calls for probe into Ortega government