When he was jailed for 13 terror offences, Sudesh Amman couldn't stop laughing.

The teenage extremist with a fascination for knives refused to stand for the judge at the Old Bailey and spent his sentencing hearing in December 2018 smiling and waving to his mother and brother in the public gallery.

Wearing a black prayer cap and long black tunic, Amman smirked when he was told that he was facing a sentence of just three years and four months.

The then 18-year-old Islamic State fanatic kept a notebook in which he wrote that his 'goals in life' were: 'Die as a shuhada', which means martyr, and 'go to jannah', which translates as paradise.

The Old Bailey heard the maths and science student at North West London College told his girlfriend to kill her parents and tried to radicalise his younger brothers.

He also sent Isis recruitment material and shared an Al Qaeda magazine to a family WhatsApp group that included his three younger brothers aged between 11 and 15, telling one of them he wanted to 'blow myself up'. 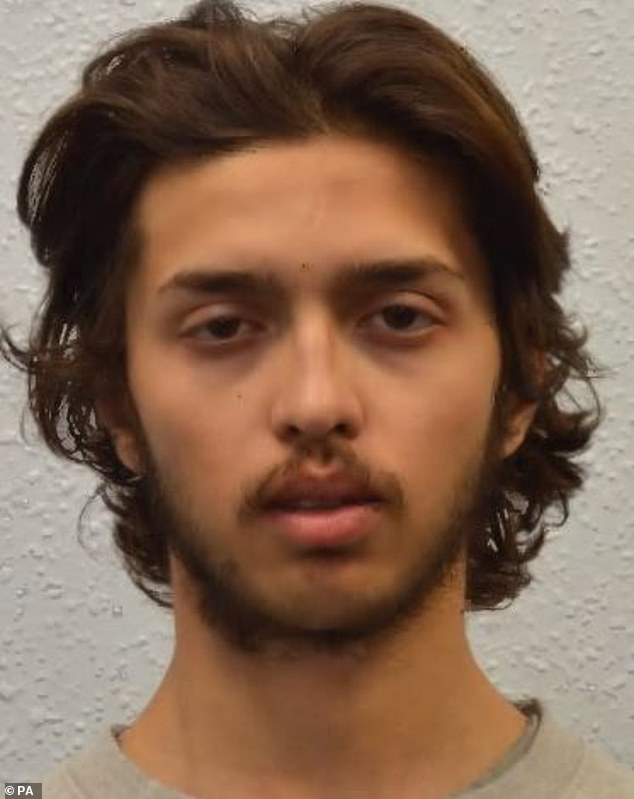 ISIS fan Sudesh Amman, 18, was sentenced at the Old Bailey after he pleaded guilty to possessing and distributing terrorist documents

Amman was said to obsessed with knives and had bought a combat knife and airgun in readiness for a terror attack. He had downloaded a number of manuals showing how to kill people, including one called Bloody Brazilian Knife-Fighting Techniques.

The 79-page manual included instructions on inflicting damage to the body with knives and how to target the vital organs in order to inflict 'quick loss of consciousness and death'.

Another manual called Close Combat was a 113-page US Marine Corps training manual which included instructions and photographs on how to use a combat knife to target the neck, groin and heart.

Chillingly, he asked if he could have a knife delivered to his girlfriend's address and told her he considered Islamic State to be the best thing to happen to Islam.

He sent her beheading videos, advising her: 'If you can't make a bomb because family, friends or spies are watching or suspecting you, take a knife, molotov, sound bombs or a car at night and attack the tourists (crusaders), police and soldiers of taghut (enemies of Islam), or western embassies in