By the start of September 1940, the Battle of Britain had been raging for almost two months and Hitler was frustrated that his enemy remained defiant.

In a speech on September 4, he announced the Luftwaffe was to change tactics. 'We will raze their cities to the ground!' he raged.

'The hour will come when one of us will break, and it will not be National Socialist Germany!'

London would be the first and chief target and the attacks would be overseen by Hermann Göring, head of the Luftwaffe. 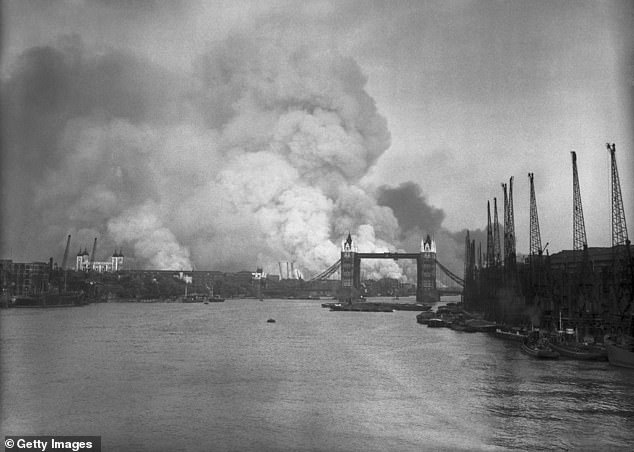 London would be the first and chief target and the attacks would be overseen by Hermann Göring, head of the Luftwaffe

German air raids on cities in Spain during the Civil War, and in Poland and Holland at the start of World War II, had brought those countries to their knees and Göring believed a decisive bombing campaign against London could win the day.

2pm: It is a warm, sunny day in England, perfect conditions for Luftwaffe attacks but, so far, they are nowhere to be seen.

The young pilots of Fighter Command are sitting outside in chairs or sleeping on the grass, waiting to scramble. It is disconcertingly tranquil.

It is a formation 20 miles wide, filling 800 square miles of sky, consisting of 348 bombers and more than 600 fighters.

It is the largest bombing raid the world has ever seen. Fighter Command wait for the planes to divide and head for separate targets, but they keep on coming as one solid mass.

On the cliffs of northern France, Hermann Göring watches with satisfaction. He has promised to 'darken the sky over London' with his planes.

4.17pm: Eleven Fighter Command squadrons scramble and scores of pilots dash for their Spitfires and Hurricanes; the remaining squadrons in the South-East are put on full alert.

Fighter Command believe the Luftwaffe's objectives must be targets they hit yesterday to finish off the job — aircraft factories and the oil terminal at Thames Haven — so the pilots are ordered to protect those facilities.

Meanwhile, German radio is giving a running commentary of the raids for the public at home: 'Wir fliegen gegen England!' (We're flying against England!').

4.43pm: At Upton Park in East London, West Ham are 4-1 up against Spurs — their striker Ron Burgess has scored a hat-trick. Suddenly air raid sirens sound.

The referee blows his whistle and the spectators calmly head for the turnstiles, expecting nothing more than a small Luftwaffe attack.

Look-out Robert Baltrop is up on the roof of a Sainsbury's nearby watching the sky and smoking.

'All of a sudden on the skyline, coming up the Thames, were black specs like swarms of flies coming in past Dagenham and Rainham and Barking, and they were heading straight for London.'

German bomb-aimer Helmut Staal looks down on the capital. 'The docks at Woolwich stood out almost as if beckoning for us to release our bomb load.'

5pm: RAF fighters roar into the skies over London to defend it. One of the first pilots on the scene, Sandy Johnstone, of 602 Squadron, has never seen so many aircraft in the air all at the same time.

'They spotted us at once and before we had time to turn and face them, a batch of Messerschmitt 109s swooped down and made us scatter, whereupon the sky exploded into a seething cauldron of aeroplanes.

'Earphones were filled with a cacophony of meaningless sounds.'

In Ealing, West London, schoolboy Roy Bartlett hears the sound of aircraft. He runs up to the top floor of his parents' house and looks towards the City.

He watches in horror as incendiary and high explosive bombs start to fall on the East End, so he runs downstairs to join his parents in their air raid shelter.

Roy said later: 'This was real, this was it — it was the beginning of the Blitz and we were petrified.'

5.15pm: In a riverside warehouse hit by bombs, barrels full of rum start to explode, sending burning liquid into the streets.

They turn the air sweet with the smell of caramel and will return a few hours later on the incoming tide still burning.

Rats scuttle round the streets fleeing the inferno.

6.10pm: The 'all clear' finally sounds. The docks around Millwall, Rotherhithe and Limehouse are in flames, as well as hundreds of terraced houses.

At Surrey Docks, more than a million tons of timber have been set alight; elsewhere warehouses full of crates of tea are blazing fiercely.

The firemen manning the hoses laugh grimly at the reversal of usual practice — they are pouring cold water over hot tea leaves.

The buttons on their tunics have become too hot to touch.

8pm: To the dismay of Londoners the Luftwaffe return, this time with more than 300 specially equipped night-bombers to drop high explosives and incendiary bombs.

They are guided by the flames from this afternoon's attack.

Pilot Hajo Herrmann said: 'Everywhere was lit up by fires, like a huge torch in the night.'

Previous orders had stated that indiscriminate bombing was forbidden: 'But now, for the first time, we were allowed to bomb regardless.'

10pm: Nine miles of Thames waterfront is still on fire. Exhausted firemen starved of oxygen are putting their blistered faces close to the nozzles of their hoses for a cool jet of air.

Peter Blackmore, a volunteer fireman, recalled: 'Everything seemed to be on fire in every direction, even some barrage balloons in the sky were exploding.

'The cinder-laden smoke which drifted all around made us think of the destruction of Pompeii.'

11pm: Sixteen-year-old Sidney Ties clambers out of the communal air raid shelter in Jamaica Street in the East End.

The air is full of smoke and dust and all around him buildings are burning.

The street is sticky with a yellow liquid that he realises is melted butter from a nearby warehouse.

Sidney starts to help dig people out of wrecked houses, something he will do after every air raid for the next few days.

American journalist Ben Robertson is on a hill overlooking the capital.

'The London we knew was burning — the London which had taken 30 generations of men a thousand years to build — and the Nazis had done that in 30 seconds.' 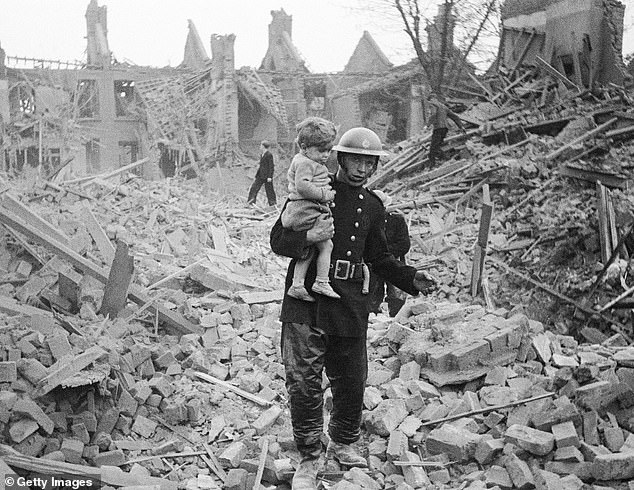 Seven firemen have perished in the flames and thousands have been made homeless. The first day of the Blitz will be known as Black Saturday

Seven firemen have perished in the flames and thousands have been made homeless. The first day of the Blitz will be known as Black Saturday.

10am: Although the sun has risen, the black smoke over London means that, on the streets, it is still dark.

In the East End, hundreds of people are carrying whatever they could rescue from their homes; some lucky ones have a pram loaded with their belongings.

Churches across the country are full as Parliament has ordered that today should be a national day of prayer.

12.30pm: Across the Channel at Dunkirk, Hermann Göring is celebrating the London bombing mission by picnicking with his deputy Hans Jeschonnek.

Göring is in an especially good mood as he has been told that 98 RAF aircraft were shot down, but the intelligence was exaggerated and the exact figure is 25.

Winston Churchill arrives in the East End to survey the bomb damage.

As he gets out of his car, the Prime Minister is surrounded by people calling: 'It was good of you to come, Winnie! We can take it! Give it 'em back!'

He is then taken to look at air raid shelter that received a direct hit, killing 40 people inside. Churchill is so moved he finds it hard not to cry.

Despite the horror of the previous hours, many London pubs are packed. The writer Theodora FitzGibbon is in a Chelsea pub.

'Jokes were made to relieve the tension, beer mugs were put down more noisily to shut out other sounds. We were glued together by dread.'

2pm: Ritchie Calder, a member of the Labour Party's committee on air raid precautions, visits South Hallsville School in Canning Town, which is packed full of people made homeless by the bombings, desperately waiting for the council to send coaches to take them to safety.

Calder has a strong feeling that the school will be bombed again and repeatedly warns Whitehall of the danger.

3pm: The man in charge of the RAF in the South-East of England, Air Vice-Marshal Keith Park, is flying high above London in his personal Hurricane to see the destruction for himself.

Park has a feeling not of despair but relief; the Germans are no longer targeting his beloved fighters and airfields.

'Now London is taking it,' he thinks, 'we shall be saved.' Göring has inadvertently given Park time to regroup and rebuild.

9am: King George VI is in his office reading a government report that states: 'In dockside areas the population is showing visible signs of its nerve cracking from constant ordeals.'

The King immediately decides to visit the East End. No one at the Palace realises a delayed action bomb landed on the north side of the building yesterday.

It will explode later this evening when the King and Queen are safely in Windsor Castle.

2pm: At St Mellons Golf Club on the outskirts of Cardiff, play carries on despite the war, although the club's rules have been amended: 'A ball moved by enemy action may be replaced; a ball lying in a crater may be dropped; a player whose stroke is affected by the simultaneous explosion of a bomb or by machine