Evidence from Sweden and America suggests that Britain may avoid a second wave of coronavirus deaths despite a rebound in infections, experts believe.

The UK's rise of of 21,300 cases in the last week - more than double the figure of 8,700 two weeks ago - has sparked fears that Britain is following in the footsteps of France and Spain which have both seen alarming spikes in virus cases.

But despite warnings from the WHO that Europe's death toll is likely to mount in the autumn, experts hope that the second peak will be less deadly because patients are typically younger and doctors are better prepared for the disease.

In Sweden, the death rate has been falling steadily since April despite a peak of cases in the summer - with the country's top epidemiologist saying that deaths can be kept low without drastic lockdown measures.

France recorded its highest-ever spike in cases with more than 10,000 on Saturday, but deaths are nowhere near the mid-April peak and the country's PM says it must 'succeed in living with this virus' without going back into lockdown.

In the United States, cases surged to record levels in July and August after the first wave had receded - but death rates in summer hotspots such as Texas and Florida were well below those in New York City where the virus hit hardest in the spring. 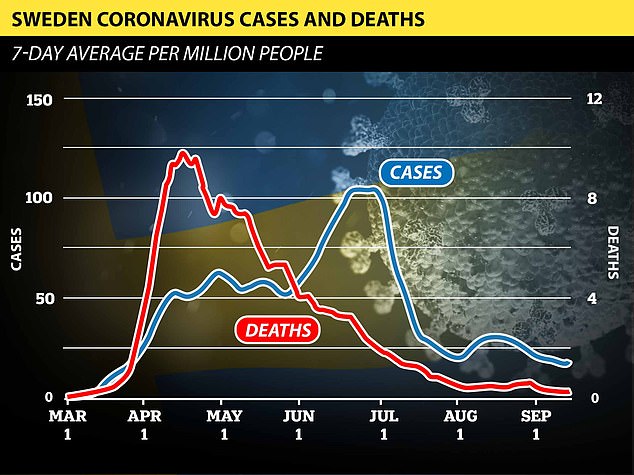 Despite seeing a new surge in coronavirus infections, Sweden has recorded a continuing fall in fatalities since the start of May 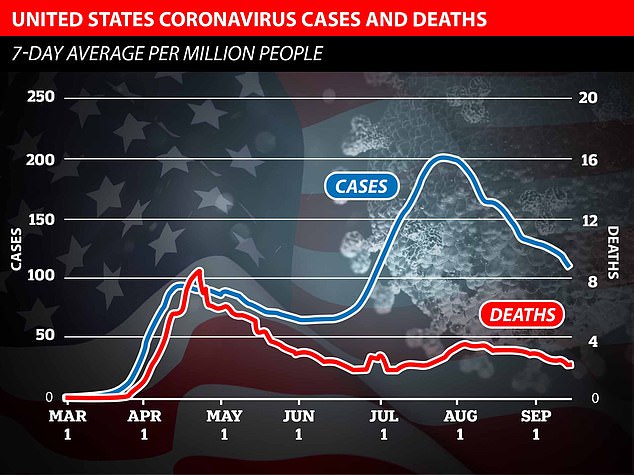 In Sweden, which raised eyebrows around the world by keeping shops and restaurants open throughout the pandemic, deaths have been falling since April.

Only 11 new deaths were announced last week, down from a peak of 752 fatalities in seven days in mid-April.

Cases reached their height in Sweden in the second half of June, when some days saw more than 1,000 infections - but the death toll continued to fall regardless.

Sweden's state epidemiologist Anders Tegnell, who has become the face of the no-lockdown strategy, said in a recent interview that voluntary hygiene measures had been 'just as effective' as complete shutdowns.

'The rapidly declining cases we see in Sweden right now is another indication that you can get the number of cases down quite a lot in a country without having a complete lockdown,' he told Unherd.

Tegnell added that 'deaths are not so closely connected to the amount of cases you have in a country', saying the death rate was more closely linked to whether older people are being infected and how well the health system can cope.

'Those things will influence mortality a lot more, I think, than the actual spread of the disease,' he said.

Meanwhile, Swedish economic activity has started to pick up and the effects of the downturn look less severe than previously feared.

Sweden today took Britain off its red-list of travel destinations despite the rise in cases in the UK which has led ministers to introduce the new 'rule of six' for social gatherings which police will have powers to enforce.

Paul Hunter, a professor of medicine at the University of East Anglia, told the Daily Telegraph that the autumn and winter are 'unlikely to be as bad as the spring' in Britain.

'Covid will probably spread less fast in the elderly than the first time round. I don't think we will see as many deaths this winter as in spring,' he said, suggesting that a smaller second peak in deaths would become the norm. 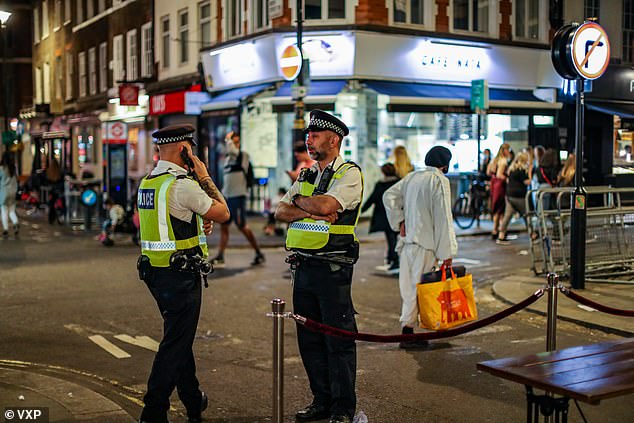 Crackdown: Police in Soho on Sunday night as people enjoyed their last night out before the 'rule of six' on social gatherings comes into effect today 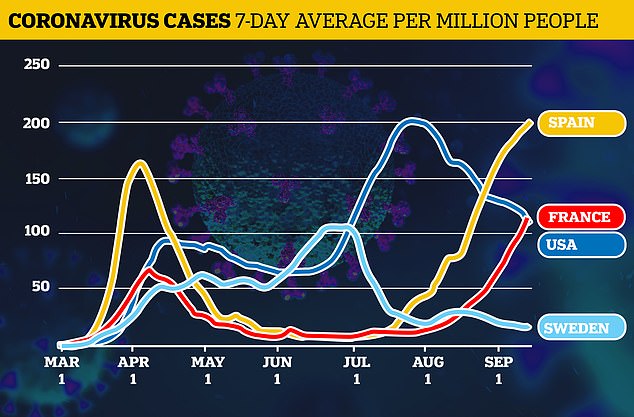 Second waves of infection: Spain, France, Sweden and the US have all seen second peaks in cases since the early days of the pandemic 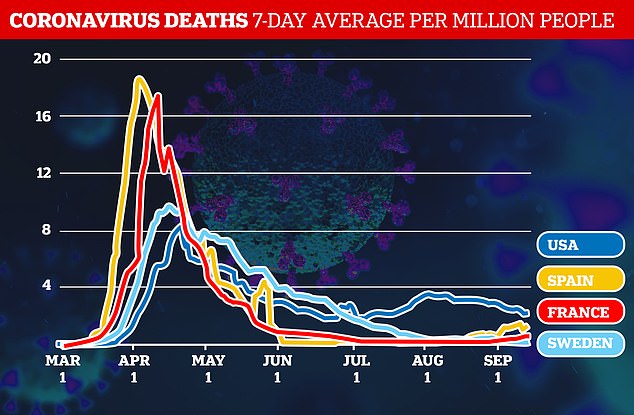 ...but no second wave in deaths: The daily death tolls in all four countries have stayed well below the levels seen in the spring, despite rising numbers of infections

Pointing to the smaller second peak of deaths in the United States, Prof Hunter said it was likely to be linked to more young people testing

PREV Donald Trump says he is willing to spend his OWN money to do 'whatever it takes ...
NEXT Children and parents are injured as car mounts pavement outside London primary ...