The Commander-in-chief spoke from the White House early Wednesday morning claiming to have won states that were too close to call and asserting that Democrats were engaged in a fraudulent effort to steal the Presidency from him.

Trump made the remarks as votes were still being counted in crucial swing states including Pennsylvania, Michigan and Wisconsin.

'This is an extremely flammable situation and the president just threw a match into it,' Wallace stated on Fox News broadcast.

'He hasn't won these states. Nobody is saying he's won the states. The states haven't said that he's won.' 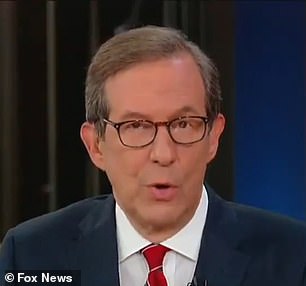 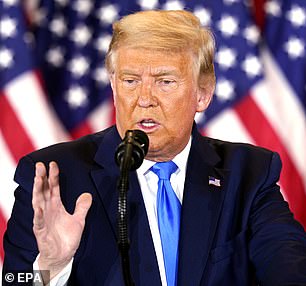 During his White House speech, Trump also vowed to mount a Supreme Court case, claiming he wanted 'all voting to stop' in case Democrats tried to deceitfully add ballots to the count.

He stated: 'This is a major fraud in our nation. We want the law to be used in a proper manner. So we'll be going to the US Supreme Court. We want all voting to stop. We don't want them to find any ballots at four o'clock in the morning and add them to the list. '

Wallace attacked Trump for that statement, telling Fox News viewers: 'Voting to stop, yes, but vote counting? You know, these states, by state law, all have the opportunity, and states routinely are unable to count votes by election night or early into the morning of the day after the election, and it goes on for days

'I don't know if he literally meant that he's gonna try to stop the counting of the vote, but I would think that would be extremely inflammatory, and frankly, I don't think it's something the courts will allow.' 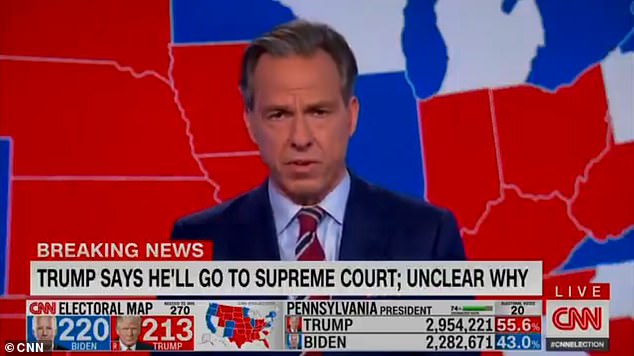 Other TV news anchors were also quick to chide Trump for his comments, including CNN's Jake Tapper (pictured)

Other TV news anchors were also quick to chide Trump for his comments.

ABC Correspondent Terry Moran accused the President of flouting the democratic process, stating: 'This isn't law, this isn't politics, this is theater. And let's be blunt: it's the theater of authoritarianism.'

Host Savannah Guthrie told viewers: 'We're listening to the President speaking at the White House, but we've got to dip in here because there have been several statements that are just frankly not true.'

Elsewhere, CBS host Norah O'Donnell claimed that Trump was 'castrating the facts of the election results', while CNN's Jake Tapper claimed that 'almost everything President Trump said was not true '. 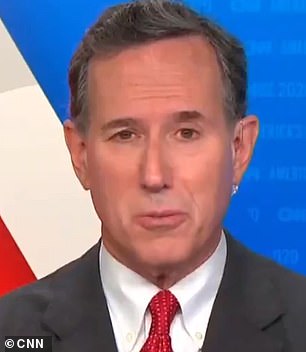 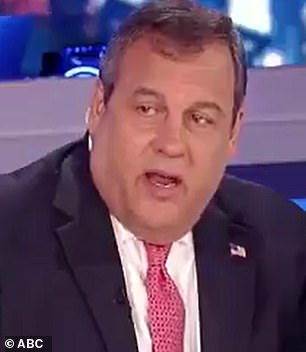 However, it wasn't just new anchors who were quick to critique the President.

2,000 people gather outside Staten Island bar that declared itself an ...