Coronavirus cases in Britain could be starting to level off because of the national lockdown, official data suggests as warnings grow that rules may have to get tougher.

The Department of Health today announced another 46,169 positive coronavirus tests, the lowest figure since December 28.

The average number of cases, counted by the date on which the swab was taken, has now fallen for two days in a row, to 57,851 from a peak of 59,660 on Saturday.

Government officials today warned that lockdown rules may have to get stricter if people don't follow them, amid fears that too many are 'flexing' the restrictions.

But there are signs lockdown is beginning to bring down the rate of infection.

Tier 4, however, did not appear to have the desired effect in London, the South East and East of England, where cases continued to rise in most areas despite the tough crackdown for two weeks over Christmas.

Only 11 out of 315 boroughs in England saw their infection rates come down in the first week of this year, up to January 5, Public Health England data shows – just 3.5 per cent.

An even stricter national lockdown, with everyone urged to work from home unless they can't, and schools across the country closed to most students, has taken the local restrictions' place and could be enforced for another six weeks or more.

Vaccinations are now the country's only hope of ending the relentless cycle of lockdowns, with 2.3million people immunised so far and a total of 2.6million doses administered.

The NHS appears to already have hit Boris Johnson's target of managing 200,000 doses per day by the end of next week. 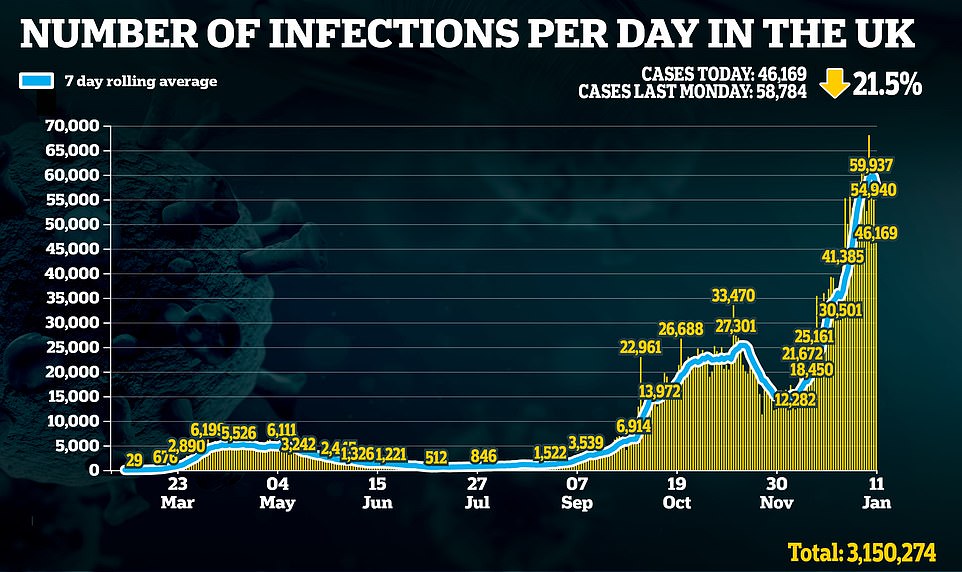 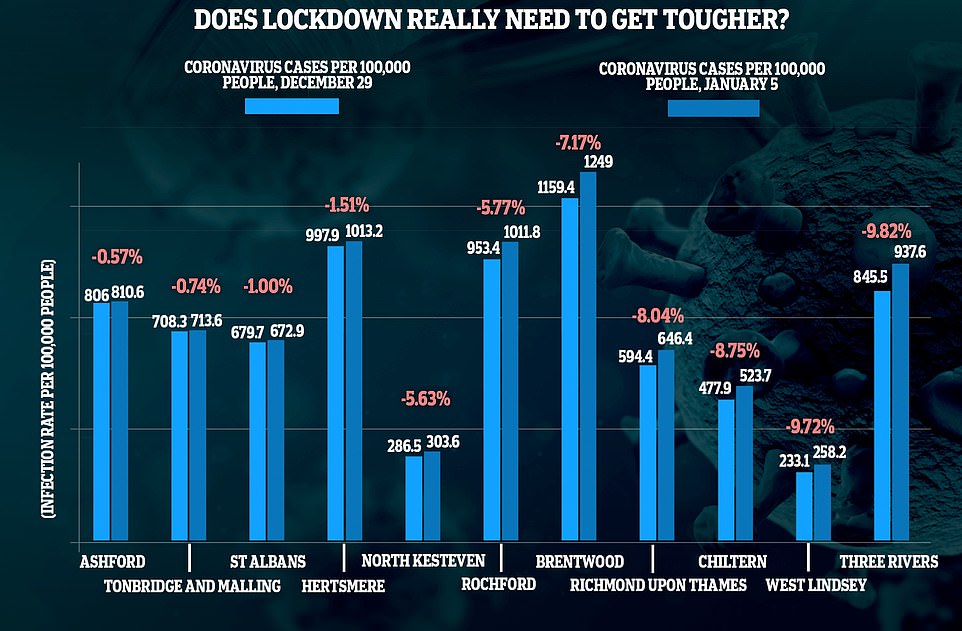 Public Health England figures showed early signs that Tier 4 was working but that progress may have been too slow to avoid a national lockdown.

The data show that per-person infection rates rose in 307 out of 315 borough council areas across the country in the week to January 5.

Cases had started falling in just 11 areas after Christmas as the second wave hit its peak, and most of those areas were in Tier 4 lockdowns.

But the drops were small and the infection rates high, suggesting politicians and officials didn't see a big enough improvement with the local rules to gamble on postponing a national lockdown.

In some parts of the country cases still doubled, tripled or even rose four-fold in the first week of the year even in spite of tougher lockdown rules everywhere from Boxing Day.

In the week ending January 5, cases came down in Ashford and Tonbridge and Malling in Kent; St Albans, Three Rivers and Hertsmere in Hertfordshire; Rochford and Brentwood in Essex; Richmond upon Thames; Chiltern in Buckinghamshire; and North Kesteven and West Lindsey in Lincolnshire.

All of these areas were in Tier 4 from Boxing Day or earlier.

The biggest falls were in Three Rivers and West Lindsey, where cases declined by 10 per cent in the first week of 2021.

In Chiltern, the drop was nine per cent, and in Richmond it was eight per cent.

But all the areas except West Lindsey still had rates of around 500 cases per 100,000 or higher, meaning 0.5 per cent of the population was still getting infected each week. Falls in case rates are positive but the numbers remained high.

And at the other end of the scale, many local authorities saw infection rates that were high and rising fast.

In Knowsley and Liverpool infections tripled, and there were 19 borough councils that saw rates double or worse in that week.

Dozens more places under the same restrictions saw Covid cases continue to rise, raising questions about how quickly the rules were working.

WHERE DID CASES RISE THE MOST AT THE START OF JANUARY?

WHERE DID CASES FALL THE MOST AT THE START OF JANUARY? 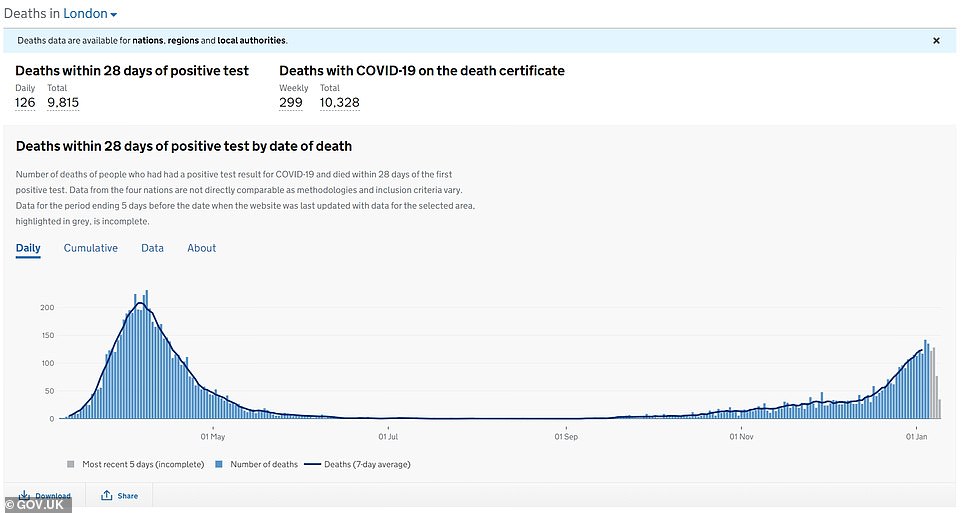 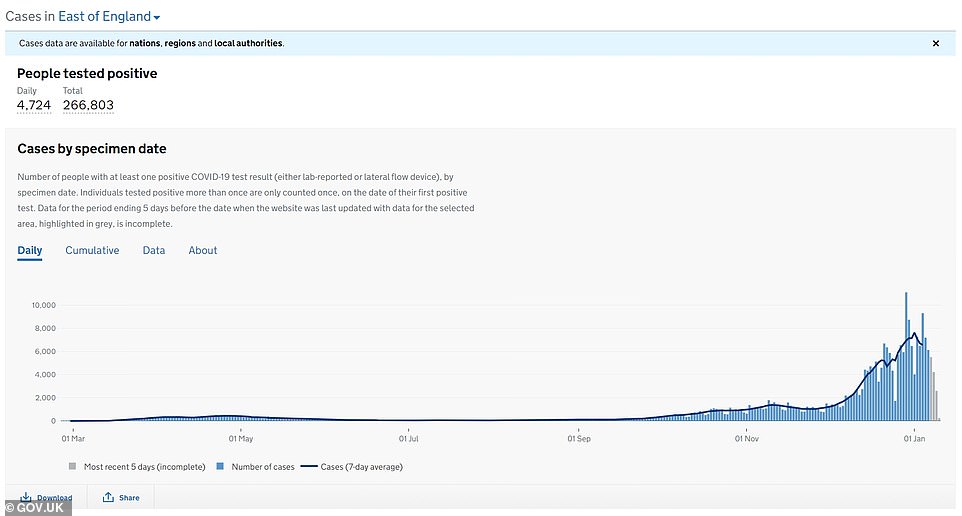 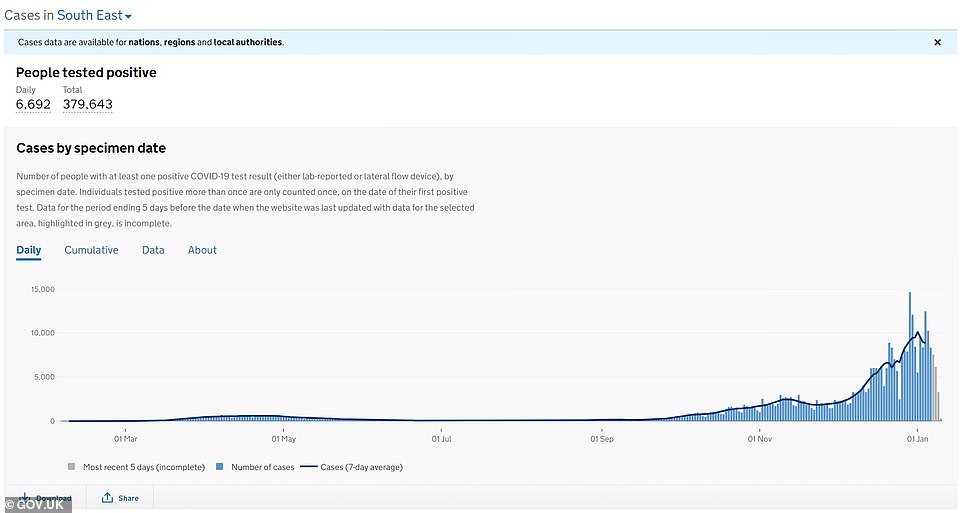 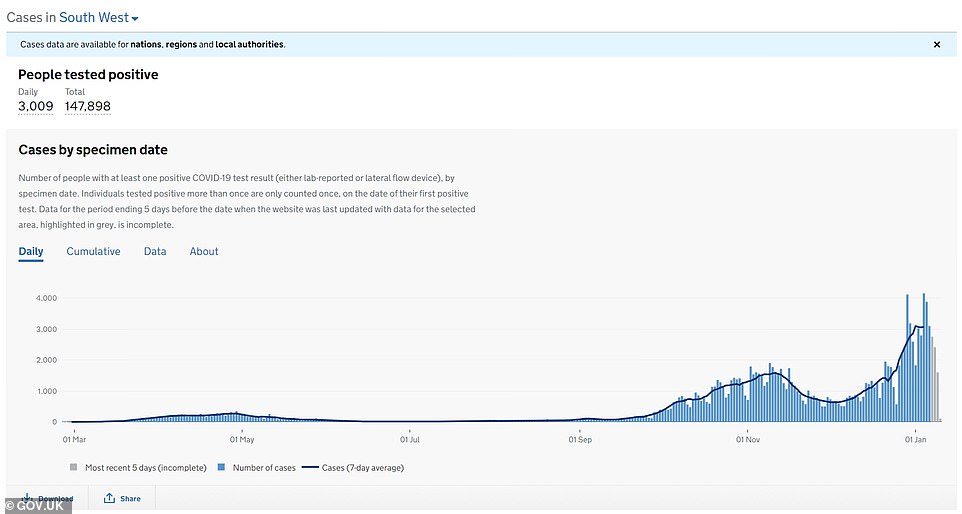 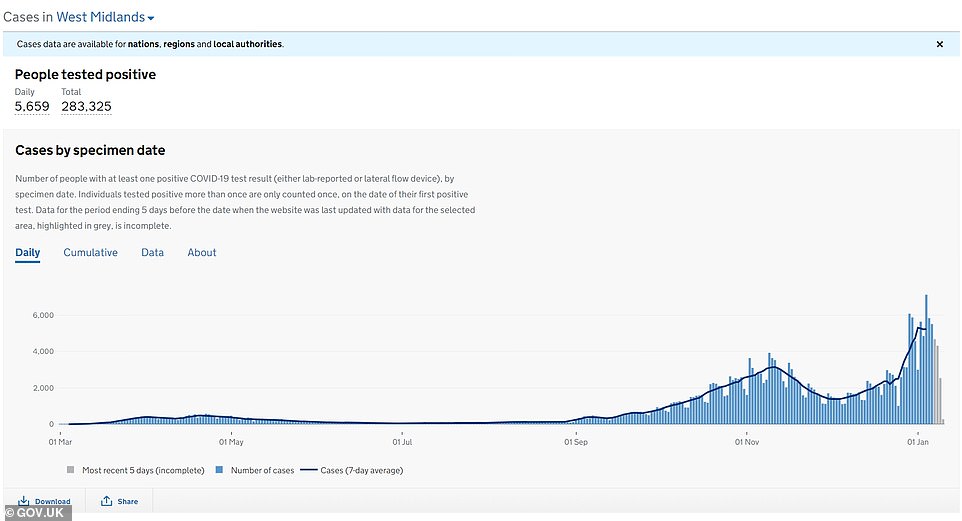 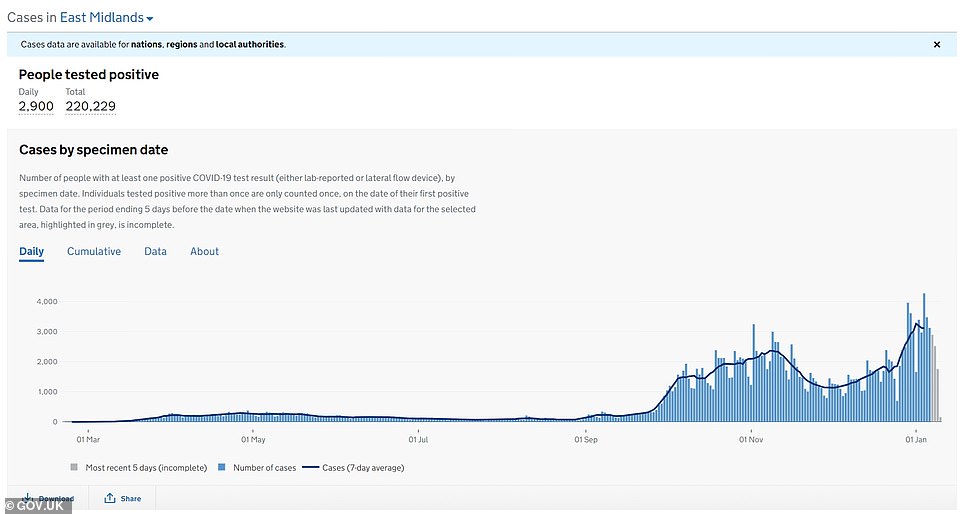 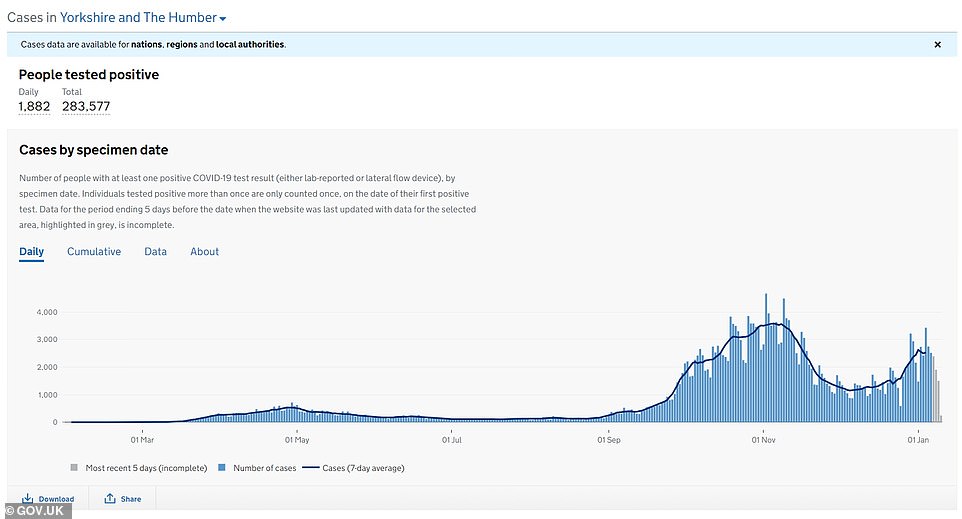 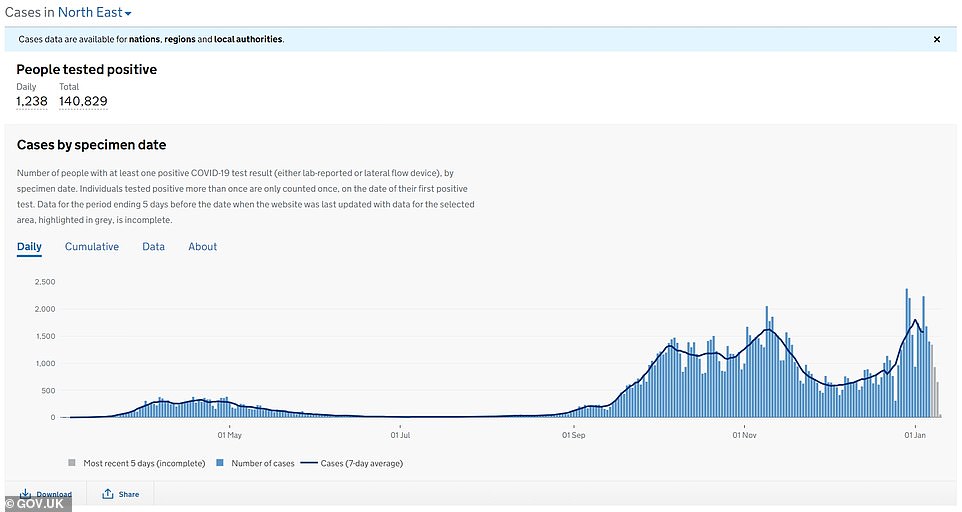 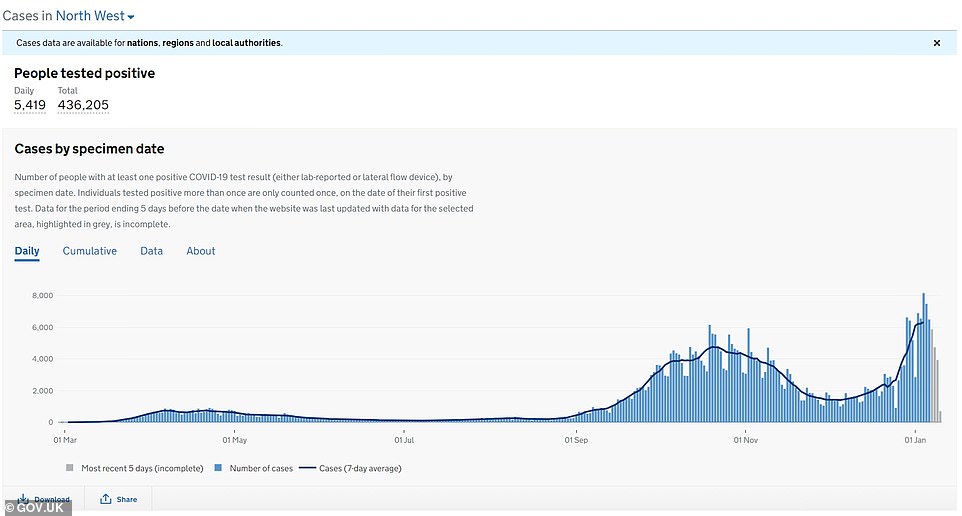 Infection rates in London appear to have blasted through Tier 4 and, despite a slowdown over Christmas, were continuing to rise at rates of up to 50 per cent per week at the start of January.

But national figures now suggest cases might be coming under control.

2.3M PEOPLE NOW VACCINATED AGAINST COVID AS TOTAL DOUBLES IN A WEEK

Matt Hancock today revealed almost 2.3million people in the UK have already had a Covid-19 vaccine, with the roll-out rate hitting a rate of nearly 200,000 jabs a day even before Britain''s seven mass immunisation centres opened.

Prime Minister Boris Johnson last week pledged to hit 200,000 doses a day by this Friday, meaning the target appears to have been hit early. Data shows the number of people who received their first dose of the vaccine doubled in a week, from 1.3m on Sunday to 2.6m by the end of yesterday.

The sign that Britain's mass vaccination drive is finally scaling up comes as welcome news, alongside the fact that the number of coronavirus cases dropped today. Department of Health chiefs announced another 46,169 people received positive test results, down 20 per cent in a week and the first sub-50,000 figure since December 28.

Ministers today released the plan behind Britain's great Covid vaccine roll-out, promising to dish out 2million jabs a week by the end of January through 2,700 centres dotted across the country.

With a successful inoculation drive Number 10's only hope of ever ending the constant cycle of tough lockdowns, officials have faced mounting pressure to come clean about how they intend to protect the UK from coronavirus.

The Health Secretary said the plan — which involves creating 50 mass-vaccination centres at football stadiums and other huge venues — 'maps our route back to normality'.

Under the plans, teachers and other key workers could be bumped up the priority queue. NHS England's boss Sir Simon Stevens today claimed there was a 'strong case' to give them jabs once the first high priority groups, which includes all over 70s, adults with underlying conditions, NHS workers and care home staff, have had their jabs.

'Roving' vaccination teams, which are already being deployed to care homes, could be asked to go door-to-door in boroughs with low uptake rates.

The document adds that by the end of January everyone in England will be within 10 miles of a vaccination site. And for those outside of this catchment, in highly rural areas, the vaccine will be brought to them via mobile teams.

So far the UK's vaccination scheme has been plagued by supply and staffing shortages, logistical problems and bureaucratic barriers that have hampered its scale-up.

No10 today also suggested they could set up a round-the-clock jab programme if the public wanted it — but that it had not yet happened because there was not the demand for it. But vaccines minister Nadhim Zahawi blamed a supply shortage for the absence of 24/7 jabs.

Ministers said an army of over 80,000 trained health workers would be involved with the vaccine rollout and more than 200,000 community volunteers have said that they will help with non-clinical side of the programme.

During a visit to Bristol City Football Club's Ashton Gate Stadium, which has been converted into a vaccine super-centre, the Prime Minister told reporters: 'We cannot be complacent. The worst thing now would be for us to allow the success in rolling out a vaccine programme to breed any kind of complacency about the state of the pandemic.'

It brings the average number of cases, calculated over the past seven days, down for the second day in a row.

Despite this, however, the sustained period of large numbers of infections, during which time SAGE believes there have been more than 150,000 new cases per day, will mean hospital admissions and deaths continue to surge for weeks.

Hospitalisations would be expected to keep increasing for two to three weeks after infections start to trend downwards, and it could take the death toll a month or more to catch up because of the lag between people catching the virus and dying.

Cases beginning to come down could mean that Britain escapes even tougher lockdown rules, though.

Boris Johnson met cabinet colleagues over the weekend to discuss an even tougher lockdown with limits on exercise, compulsory mask-wearing outdoors and a ban on social bubbles all being considered by ministers, sources claimed.

The Cabinet Office refused to deny that draconian new laws were coming.

The Health Secretary, Matt Hancock, refused to speculate when directly asked if harsher measures - including curfews and nursery closures - might be brought in, and instead said Britons should 'follow the rules that we've got'.

One Whitehall source told MailOnline that the changes discussed even included introducing a ban on people leaving their homes more than once a week.

Under current rules, Britons can exercise with one other person or with their household or support bubble.

But a Government source said the rule is 'being used as an excuse for people to go for a coffee in the park with their friends' and could be tightened, The Daily Telegraph reported.

Professor Chris Whitty, England's chief medical officer, did a series of interviews this morning in which he appealed to people to follow the rules strictly and not bend them so they could socialise.

He told BBC Radio 4: 'We got to be very clear that we are now at the worst point of this epidemic for the UK.

'The new variant undoubtedly makes every situation slightly more dangerous than it was in the previous situation because the current variant is transmitted exactly the same way, but the probability of transmission with any interaction has now gone up with this new variant.'

Analysts believe as many as half of people in some boroughs of East London have already had Covid-19 and the areas could be developing herd immunity.

Given that re-infection with Covid appears to be extremely rare, scientists say high past infection rates could mean the spread of the virus is getting slower in those areas as fewer become susceptible to catching it and passing it on.

Infection rates have surged in the second wave, meaning hundreds of thousands more survivors will have developed immunity to the virus which could slow it down in the future.

Per-person infection rates doubled in most parts of London in the week before Christmas, reaching higher than one per cent of the population in the worst-affected places in the East.

And they continued rising after Christmas and into early January, despite Tier Four restrictions having been in place for up to two weeks, suggesting that the local rules were not acting fast enough and potentially spurring the Government on to ordering a national lockdown before the virus became uncontrollable nationwide.

Edge Health estimates 54 per cent of the population in Barking and Dagenham have already been infected with coronavirus – more than 100,00 people. Based on death rates in the boroughs, the infection rate could be 49 per cent in Newham, 43 per cent in Redbridge and 42 per cent in Havering, the project found. 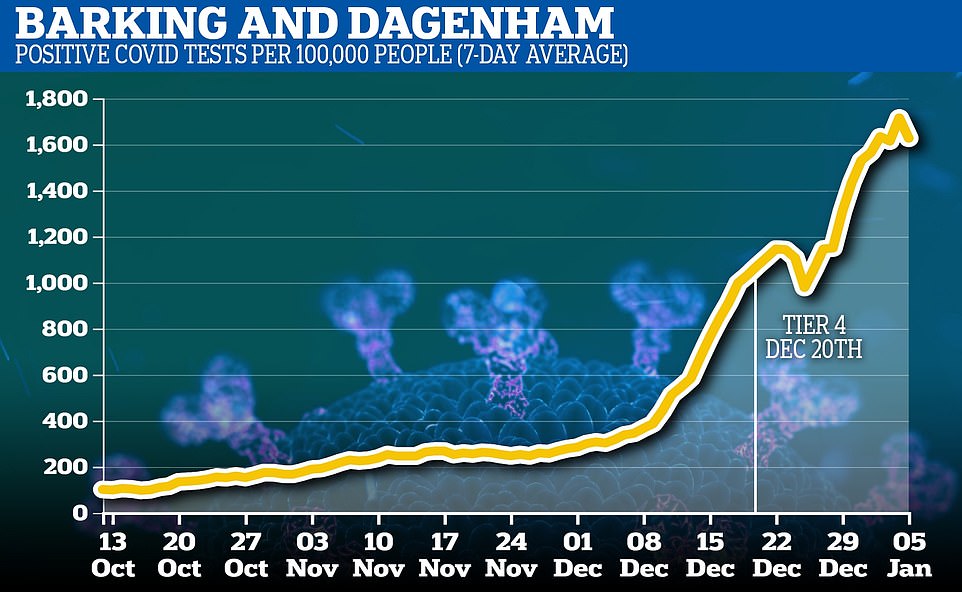 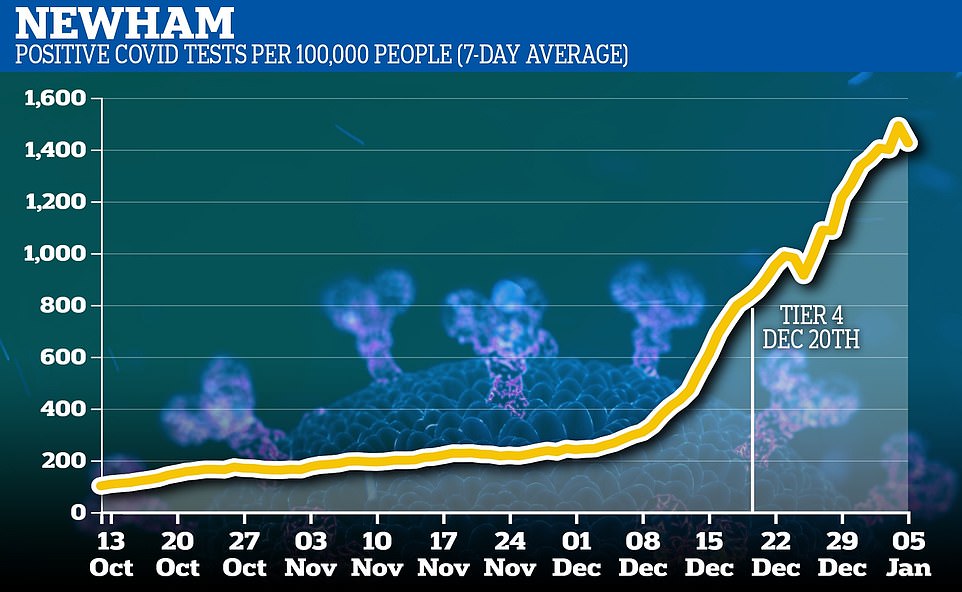 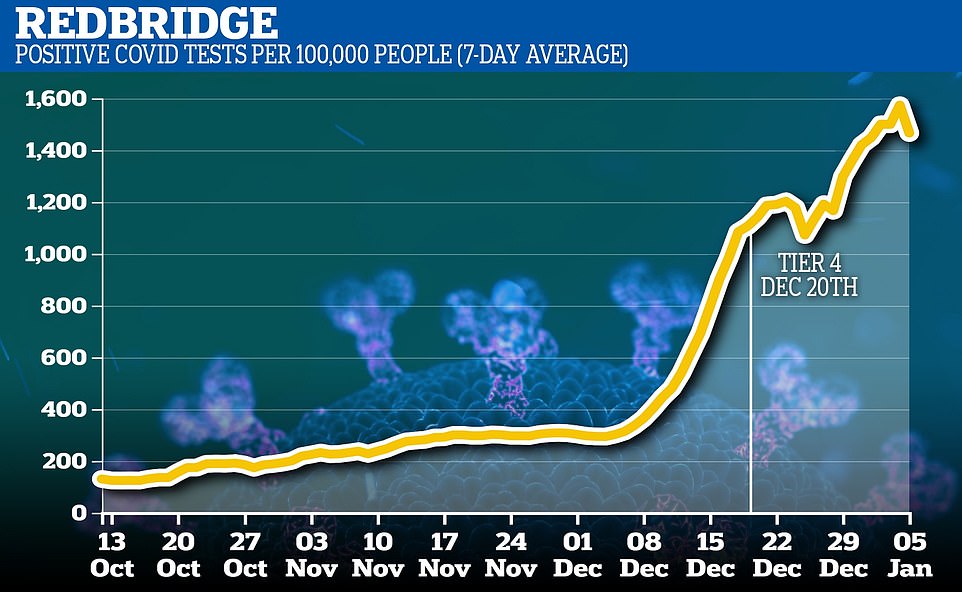 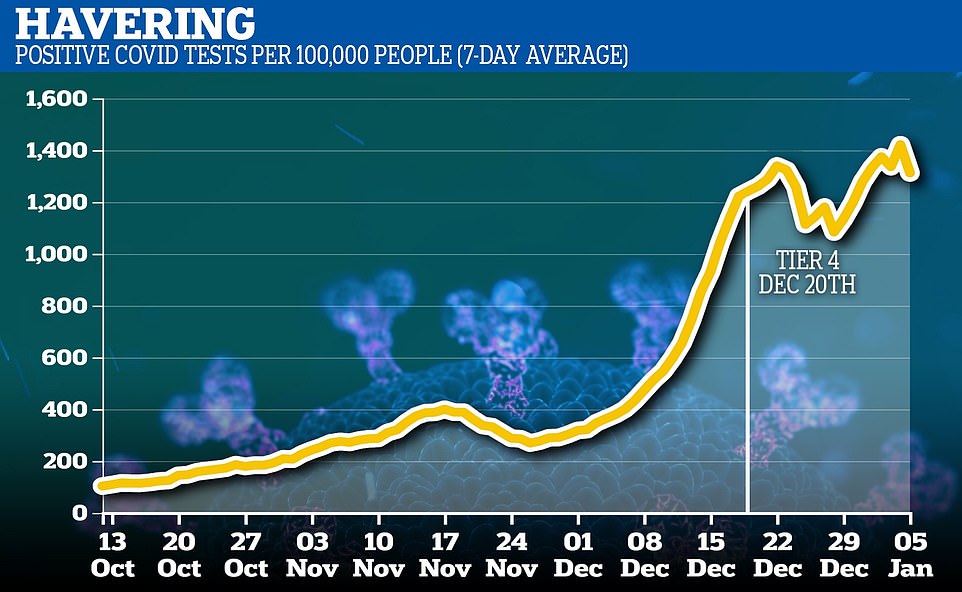 Professor Neil Ferguson, whose grim forecasts sent Britain into its first lockdown last year, has said past infection rates in London — which was also worst-hit by the first wave last spring — will slow down transmission in future.

Scientists estimate around 80 per cent of a population, or more, need to be immune for an area to be protected against outbreaks, but lower percentages may still be able to slow the spread 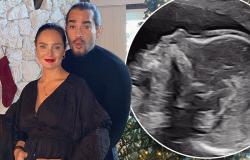 Are Elon Musk and Tesla the next bubble waiting to burst?

Do you take statins? Watch out for the side effects that may surface when you ...