THE WEST "got it wrong" on China according to an extraordinary confession from Sir Alex Younger, the outgoing head of MI6.

Over the past few years China has significantly boosted its military spending whilst continuing to enjoy strong economic growth. Beijing has territorial disputes with a number of its neighbours and its relationship with the western powers is becoming increasingly tense. 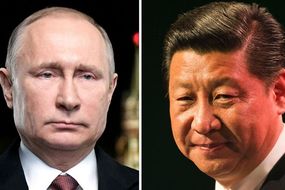 Speaking to the Financial Times Sir Alex admitted over the past couple of decades many western policy makers falsely though China would become more like the west as it “matured”.

He commented: “The idea that as they matured and became richer they were going to become more like us is for the birds.

“There will be at least two dominant value systems on one planet into the medium term and that’s just a fact and it’s where we are going.”

Sir Alex argued it’s important the west and China can live peacefully together rather than initiating a new cold war.

However, he added Beijing must be confronted over ongoing cyber attacks aimed at its rivals.

Sir Alex said: “I don’t think it’s black or white, and that’s why I reject this cold war idea.”

China’s relationship with the United States has deteriorated sharply since the election of Donald Trump in 2016.

The two world powers have clashed over COVID-19, trade, Hong Kong, the South China Sea and Beijing’s treatment of its Uyghur Muslim minority.