MONICA GALETTI is known for being one of the judges on MasterChef: The Professionals and she has a fascinating cultural background. Where is MasterChef judge Monica Galetti from?

Monica Galetti is best known for her role as one of the judges on the spin-off to MasterChef, which tests the abilities of some of the most experienced chefs in the country. Galetti has years of experience in some of the top restaurants in the UK and she opened her own restaurant with her husband David a few years ago. Fans are keen to find out where the chef is from, and Express.co.uk has everything you need to know.

{%=o.title%}
Where is MasterChef judge Monica Galetti from?

Galetti is known for taking part in a number of different food programmes and she is also one of the faces of Amazing Hotels: Life Beyond the Lobby.

The chef joined the MasterChef team back in 2009 and fans of the cooking competition series have learned a lot from the chef-proprietor.

In 2017 she opened Mere, a critically acclaimed restaurant in London, alongside her husband David who is a wine expert.

The mother-of-one was born in Samoa - which is an island country in the continent of Oceania, made up of a number of different islands.

Samoa is in the same region as islands such as Fiji and New Caledonia, and on a map it is not too far from Australia and New Zealand.

Galetti was raised by her two aunts in Samoa as her mother had moved to New Zealand for work, with the chef herself moving to there when she was eight. 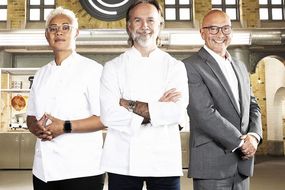 MasterChef The Professionals 2020: When does MasterChef start?

She lived with her parents and siblings and after completing her studies in hospitality, she took part in a number of cooking competitions across the globe.

She was keen on working in London and was snapped up by top chef Michel Roux Jr, meaning she moved to the UK in 1999 and quickly worked her way up the ranks.

The chef is proud of her Samoan roots and she is a UK Tourism Ambassador for her home country. Her heritage plays an important part in her culinary creations and she has adapted some Pacific dishes to suit all tastes.

She admitted moving away from New Zealand and leaving her friends and family behind was one of the toughest decisions she has had to make.

Galetti said it was a huge culture shock moving